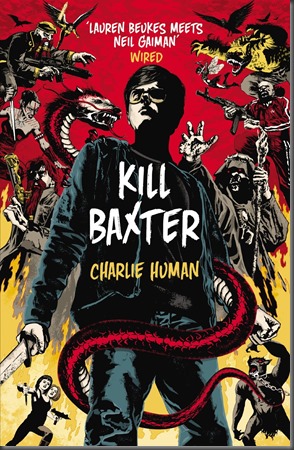 In July, Century (a division of Random House UK) will be publishing KILL BAXTER, the follow up to Charlie Human’s mind-bending debut, Apocalypse Now Now. I thoroughly enjoyed that novel (despite the slightly weak ending) – the main character, Baxter, was delightfully twisted; the plot rather bonkers, with a great Cape Town setting populated by some of the most colourful, interesting and weird Urban Fantasy creations I’ve come across. I have pretty high hopes for Kill Baxter, and can’t wait to get my mitts on a copy. The cover is once again done by the ever-excellent Joey Hi-Fi who is also working on a separate South African cover (as he did for Apocalypse Now Now). Can’t wait to see that piece, too!

And he thought the hard part was over…

Instead he’s packed off to Hexpoort, a magical training school that’s part reformatory, part military school, and just like Hogwarts (except with sex, drugs, and better internet access). The problem is that Baxter sucks at magic. He’s also desperately attempting to control his new ability to dreamwalk, all the while being singled out by the school's resident bully, who just so happens to be the Chosen One.

Sounds pretty cool, no? This time, I hope Human manages to really stick the landing, and makes Kill Baxter awesome all the way through. The novel is due to be published on July 17, 2014 in the UK (not sure about the US or South Africa).

Posted by Civilian Reader at 11:07 PM