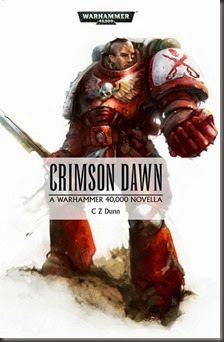 In the entire galaxy there is nothing more cursed than a traitor.

Excommunicated, hated and hunted, the Crimson Slaughter turned from the Emperor’s Light and have since carved a bloody trail through the Imperium. But before they betrayed their oaths and turned to the worship of the Dark Gods, they were the Crimson Sabres, stalwart and loyal. This is the story of their fall, as Scout Captain Anzo Riegler, a lone voice of reason amidst Chaos, becomes an unwitting pawn in his Chapter’s demise.

I’m a fan of Dunn’s fiction. His short stories – particularly those focused on the Flesh Tearers chapter – have been great, visceral science fiction stories. Crimson Dawn is another good story, but it doesn’t have quite the punch of some of his previous work. Partly, this is due to the different type of story he’s trying to tell – the main character is a scout captain, so it’s unlikely that his tale will be one of out-and-out “bolter-porn”. Instead, this is a somewhat slower-paced story of the insidious nature of Chaos and the subtle corrupting force it can exert even on those who believe themselves to be pure of heart and mission. I think the story could have benefited from being a bit longer – this would have allowed for a slower reveal and a greater tension. It might also have allowed for more exploration of the Crimson Sabres, too. As an excommunicated chapter, and one that considers itself still loyal to the Golden Throne, it would have been nice to see a bit more exploration of what this meant. True, this is a novella, so there’s only so much soul-searching it can offer before it buries the story. There are hints at the end that this could be the first in a number of short stories detailing the Sabers’ fall. I would certainly welcome more.

There are some interesting elements to the story, but ultimately it didn’t impress as much as Dunn’s work has in the past. In much the same way as his Dark Vengeance novella didn’t really fire my imagination. This is better than that story, though, and I would still recommend it to fans of Warhammer 40,000. I just think he’s done better.

Posted by Civilian Reader at 3:29 PM