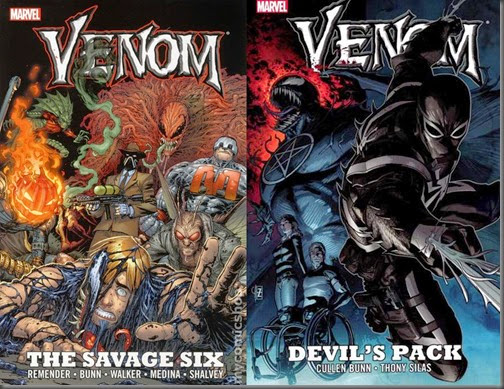 I’ve been reading through the latest run on Venom, by Rick Remender and Cullen Bunn and, while I haven’t been moved to write a full review, I did want to just flag it up as a series that is well worth reading. The covers above are for the latest two collections that I’ve read. There are six Venom-only books in the series, which a couple of cross-overs (Spider Island and Minimum Carnage).

Remender kicked off the series, and does a great job of making it stand out among the Spider-Man related series. For one thing, it’s not nearly as quippy as other Spidey series, which means it didn’t quickly become irritating, and I was able to read through three collections without wanting to confine the protagonist to the trash heap of comicdom (as can so easily happen with the uneven Amazing Spider-Man). It is a darker series, overall, and works very well. What I like best about the series is that it largely avoids the Marvel glibness, which (in my humble opinion) has ruined too many series (e.g., Captain Marvel). Instead, and despite the supernatural/Hell-related storylines, this is somewhat more on the horror side of things. Very welcome indeed.

I much prefer the non-super-heroing storylines in this series. The plethora of other symbiotes were less interesting to me, to be honest, but they do on occasion add another element of tension and emotional angst for Flash. 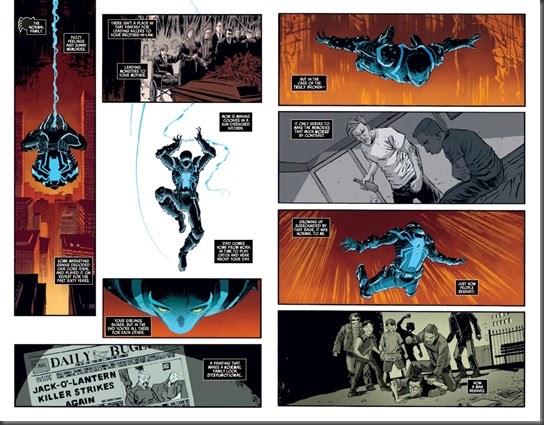 Remender shows us how Eugene “Flash” Thompson is not your typical hero. For one thing, unlike many other Marvel heroes, he started out as a bully: Peter Parker’s tormentor at school. Rather than just telling us that he is a bully who has come good, Remender instead builds Flash’s background brilliantly and gradually. Present day scenes are interspersed with flashback to his childhood, abused by his alcoholic father and emotionally betrayed by his beaten-down mother, and the emotional damage this has done. Coupled with his double-amputee existence, made bearable by the Venom symbiote, he is constantly struggling to become the hero he always wished he could be. He is confronted by the lasting damage of his childhood; the damage he caused as an angry jock, and then as an alcoholic and also as Venom. Bunn picks up this character development expertly, and doesn’t miss a beat, building on what Remender started really well. 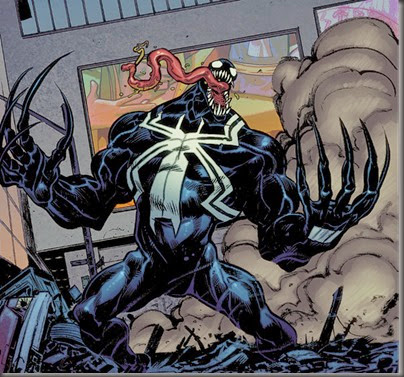 I know I’ve focused on the two writers, but it should also go without saying that the artwork is excellent – from the controlled action and off-mission scenes to the Venom’s-Taken-Over-And-Gone-Crazy moments (which are far less frequent than you might think, especially in the latter-half of the series), it is an eye-catching, visually impressive and brooding series. 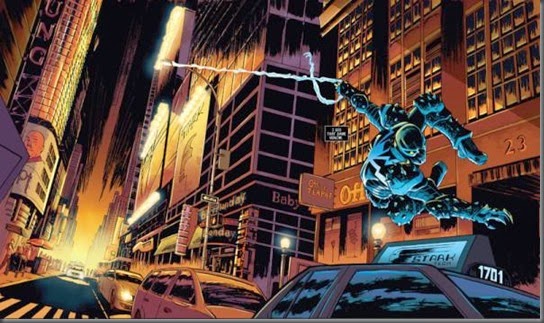 Posted by Civilian Reader at 4:29 PM