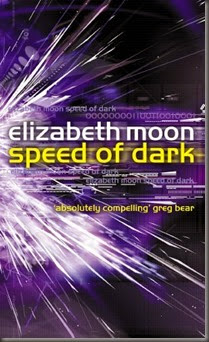 Lou is different to “normal” people. He interacts with the world in a way they do not understand. He might not see the things they see, however, but he also sees many things they do not. Lou is autistic.

One of his skills is an ability to find patterns in data: extraordinary, complex, beautiful patterns that not even the most powerful computers can comprehend. The company he works for has made considerable sums of money from Lou’s work. But now they want Lou to change – to become “normal” like themselves. And he must face the greatest challenge of his life. To understand the speed of dark.

As I’m sure a lot of other reviewers have found, Speed of Dark is not the easiest of novels to review. Reading Speed of Dark was illuminating, engaging, and moving. Lou is a powerful and endearing voice, and to get a glimpse of how his mind works and how he sees the world was fascinating. I don’t know nearly as much about autism as I should, but I felt Moon has written an intelligent and nuanced tale of an autistic man’s experiences in a world that doesn’t know how to accept him as he is, nor properly understand how he sees the world. This is a great novel, and it is absolutely clear to me why it won a Nebula Award.

To get it out of the way quickly, I think there was only one weakness to the novel, and that was the fact that plot felt somewhat of a secondary concern. This is not strictly speaking a bad thing, as Lou and his colleagues are universally interesting characters to spend time with. The plot centres around the innovative “cure” for autism, and the characters’ decisions of whether or not they want to take it, and therefore become more like the “normals”. The ending felt just a tad rushed and truncated, and I’m still not sure how I actually feel about Lou’s choice (I won’t spoil it, though).

What a cure for autism would mean is something I’ve wondered about quite a bit, recently. It’s not something I’m very good at talking or writing about, but I did like the way Moon handled the issue and hypothetical, and also how her characters saw the choice.

Without doubt, the best thing about the novel is Lou’s voice. I loved reading the story told through his perspective – seeing the different ways he sees people and the world, his shrewd observations about how “normals” treat him so very differently, when they don’t have to (or, indeed, really shouldn’t). The different ways in which certain actions of his are treated as symptoms, while the same actions from a normal are considered, well… normal. Here’s an early example from the novel, when Lou is visiting his therapist, Dr. Fornum:

When she answers the phone I can look around her office and find the twinkly things she doesn’t know she has.  I can move my head back and forth so the light in the corner glints off and on over there, on the shiny cover of a book in the bookcase.  If she notices that I’m moving my head back and forth she makes a note in my record… It is called stereotypy when I do it and relaxing her neck when she does it…

In fact, this early scene with Dr. Fornum is filled with interesting and intelligent commentary on the treatment and impression of those with autism in society today. I’m sure there are many reviews that have used the following passage, but I thought it was superb and perfectly explains Lou’s situation:

If they aren’t going to listen, why should I talk?

I know better than to say that out loud. Everything in my life that I value has been gained at the cost of not saying what I really think and saying what they want me to say.

In this office, where I am evaluated and advised four times a year, the psychiatrist is not less certain of the line between us than all the others have been. Her certainty is painful to see, so I try not to look at her more than I have to. That has its own dangers; like the others, she thinks I should make more eye contact than I do. I glance at her now.

Dr. Fornum, crisp and professional, raises an eyebrow and shakes her head not quite imperceptibly. Autistic persons do not understand these signals; the book says so. I have read the book, so I know what it is I do not understand.

What I haven’t figured out yet is the range of things they don’t understand… I know some of what she doesn’t know. She doesn’t know that I can read. She thinks I’m hyperlexic, just parroting the words… She knows I work on a computer, she knows I went to school, but she has not caught on that this is incompatible with her belief that I am actually nearly illiterate and barely verbal… She does not like it when I use big words (as she calls them) and she tells me to just say what I mean. 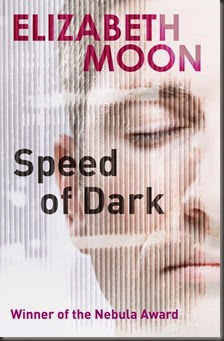 The novel is filled with very-well-written passages, or almost beautifully-worded observations and descriptions. At one point, for example, Lou ponders the nature of his autism, and how or why he has it:

I do not think God makes bad things happen just so that people can grow spiritually. Bad parents do that, my mother said. Bad parents make things hard and painful for their children and then say it was to help them grow. Growing and living are hard enough already; children do not need things to be harder. I think this is true even for normal children. I have watched little children learning to walk; they all struggle and fall down many times. Their faces show that it is not easy. It would be stupid to tie bricks on them to make it harder. If that is true for learning to walk, then I think it is true for other growing and learning as well.

God is suppose to be the good parent, the Father. So I think God would not make things harder than they are. I do not think I am autistic because God thought my parents needed a challenge or I needed a challenge. I think it is like if I were a baby and a rock fell on me and broke my leg. Whatever caused it was an accident. God did not prevent the accident, but He did not cause it, either… I think my autism is an accident, but what I do with it is me.

As I said at the start, and is no doubt apparent at this point, this is a tricky novel to review. Overall, then, I would say that this novel is extremely well-written, delicately and intelligently handled, quite moving and even uplifting. It could be described as “low-SF”, as the cure and something at the end are pretty much the only science fictional part of the story.

Very highly recommended. This is a superb novel.

I received this novel as part of the Hodderscape Review Project. It is published in the UK by Orbit Books, and received a new cover this week (the second included in the review, above).