“Half a King” by Joe Abercrombie (Del Rey / Voyager UK) 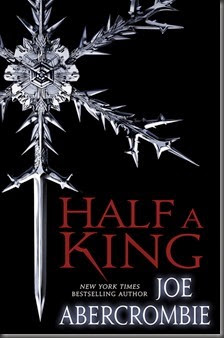 “I swore an oath to avenge the death of my father. I may be half a man, but I swore a whole oath.”

Prince Yarvi has vowed to regain a throne he never wanted. But first he must survive cruelty, chains, and the bitter waters of the Shattered Sea. And he must do it all with only one good hand.

The deceived will become the deceiver.

Born a weakling in the eyes of his father, Yarvi is alone in a world where a strong arm and a cold heart rule. He cannot grip a shield or swing an axe, so he must sharpen his mind to a deadly edge.

The betrayed will become the betrayer.

Gathering a strange fellowship of the outcast and the lost, he finds they can do more to help him become the man he needs to be than any court of nobles could.

But even with loyal friends at his side, Yarvi finds his path may end as it began – in twists, and traps, and tragedy.

I’ve only recently come to read Abercrombie’s novels, finally enjoying The First Law trilogy last year. What became quickly apparent with those novels is that Abercrombie can write. Not just in terms of plotting, but his prose, too, is superb. With Half A King, he has taken his first foray into the YA market, and everything we loved about his previous work is true here, too. This was a very enjoyable read, and I can’t wait for books two and three.

This novel is a pretty quick read. I blitzed through it in just two glorious days of fantasy entertainment. This is both a very good thing, and also brought to mind the one weakness (in my opinion) of the novel. Firstly, the pace never lets up, which means Yarvi’s journey and ordeal draws the reader inexorably on towards the excellent, unexpected denouement. The characters he meets along the way are varied, very well-drawn, and diverse. They all add to the story – none of them felt like props. They felt real – from the melodramatic captain of a slave ship; to Nothing, the mysterious deck-scrubber of said ship, with quite the secret… Yarvi’s handicap is handled delicately and naturally – that he must rely on his wits, as opposed to brawn, was a nice alternative to much fantasy today.

The society into which he is born is warlike and Viking-esque (it’s not fully explained or described, which I liked, as it leaves more for future novels), and he is naturally a disappointment to his father. His mother, a pioneering businesswoman, appears cold and somewhat indifferent to him, equally disappointed by his deformity and how it prohibits him from fulfilling the kingly promise of his father and ancestors. Over the course of his unwilling travels, he gathers a motley crew of companions, all of whom develop a loyalty to him and, somewhat inexplicably, agree to help him fulfill his oath for revenge. 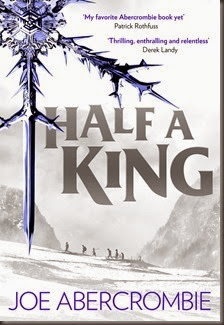 So how can any of this be a weakness? Well, after reading the novel, you realise that an awful lot happens to Yarvi and Co., in what is actually a pretty short timeframe. Generally speaking, there’s nothing wrong with this – just because it’s fantasy doesn’t mean it has to be drawn out for hundreds-upon-hundreds of pages, after all. It’s just that, this novel could be described as “A Serious of Unfortunate-Yet-Fortuitous Events”. A couple of developments felt a little too serendipitous. But still fun. If it had been just a bit longer, with a timeframe that lasted just a bit longer still, then I think this would have been a near-perfect fantasy adventure/revenge story.

Nevertheless, and despite this minor niggle, the novel is filled with great moments, scenes, encounters, and conversations. The characters, pacing, prose, and story are all engaging and addictive. The action scenes are well-composed and don’t dominate or bury the story. The first and last chapters have a nice symmetry, too – and, indeed, that was one of the best final chapters I’ve read in a while. Abercrombie avoids info-dumps and overt telling, and allows the story to fill out our picture of the world as it unfurls.

Overall, great storytelling for all fans of fantasy. I can’t wait for the next in the series, Half a World.

Posted by Civilian Reader at 2:22 PM