Quick Reviews: “Bullseye”, “The Innocent”, and “The Hit” by David Baldacci (Macmillan) 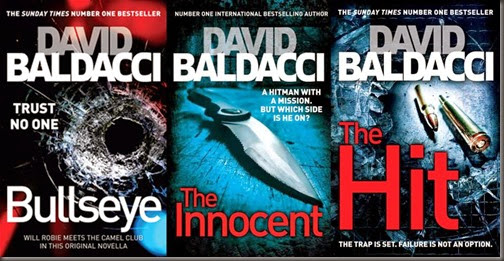 I really enjoyed all three of these stories. I also read them quite a while ago, in preparation for the release of The Target. I’m not sure why I didn’t get around to posting reviews of them sooner, but I wanted to mention them here. Because they’re excellent. I’ll keep things short, though… 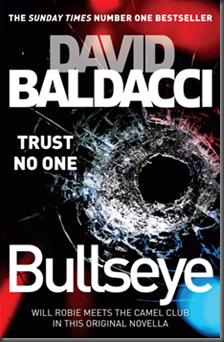 Worlds collide when government assassin Will Robie is caught in the crossfire with Oliver Stone and the Camel Club.

Will Robie is closing in on his next target when he finds himself in the middle of a bank heist – and he’s taken hostage alongside Oliver Stone. But is this just a simple bank job, or are the robbers after something even more valuable – and dangerous – than the cash in the vault?

This is apparently set between the second and third full-length novels starring Will Robie, but it was the first thing I read that features him. It also features Oliver Stone, the “leader” of the Camel Club – stars of Baldacci’s strongest series of the same name. I rather enjoyed this – no prior knowledge of either of the characters is necessary, although it will allow you to spot some of the references, etc. It’s a quick, expertly written story, pitting Robie and Stone against a group of bank robbers. The two heroes give the baddies a real run for their money, too, and I rather enjoyed their inability not to cause them trouble. As the hostage situation continued, though, it became clear that something else is going on, and it’s up to Robie and Stone to thwart their larger plan…

Really enjoyed this, and started reading The Innocent almost immediately… 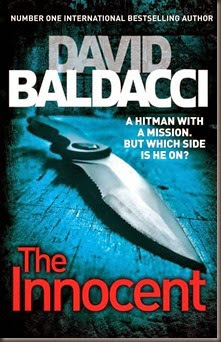 America has enemies – ruthless people that the police, the FBI, even the military can’t stop. That’s when the U.S. government calls on Will Robie, a stone cold hitman who never questions orders and always nails his target.

It begins with a hit gone wrong. Robie is dispatched to eliminate a target unusually close to home in Washington, D.C. But something about this mission doesn’t seem right to Robie, and he does the unthinkable. He refuses to kill. Now, Robie becomes a target himself and must escape from his own people.

Fleeing the scene, Robie crosses paths with a wayward teenage girl, a fourteen-year-old runaway from a foster home. But she isn’t an ordinary runaway – her parents were murdered, and her own life is in danger. Against all of his professional habits, Robie rescues her and finds he can’t walk away. He needs to help her.

Even worse, the more Robie learns about the girl, the more he’s convinced she is at the center of a vast cover-up, one that may explain her parents’ deaths and stretch to unimaginable levels of power.

Now, Robie may have to step out of the shadows in order to save this girl’s life… and perhaps his own.

A very good introduction to Will Robie and the world in which he operates. Baldacci gives us plenty of backstory (a couple of missions before the main plot of the novel kicks in), while also providing a twisty mystery to puzzle through. Robie is the best assassin available to the US clandestine services, and he has achieved this position mainly by being hyper-focused, diligent and rather disconnected from the rest of the world. He lives day-to-day training, preparing, planning, and a little bit of recuperating. Then, after Julie Getty falls into his life, things start to get very difficult and interesting.

Imagine Leon/The Professional, if he was an American government assassin, operating in today’s post-9/11 world, and you have a good idea of how this novel feels. In much the way that Mathilda (played by Natalie Portman) humanises Leon (Jean Reno) in the movie, so too does Julie bring Robie incrementally back into the real world not populated by killers and contracts.

I really enjoyed it, and blitzed through, reading well into the night. The Innocent has all of the hallmarks of a Baldacci novel: well-drawn, believable characters, excellent pacing, a couple of plot-twists. Addictive reading. Very highly recommended to all fans of thrillers and definitely Baldacci’s other work. 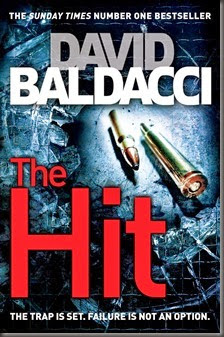 The trap is set. Failure is not an option.

When government hit man Will Robie is given his next target he knows he’s about to embark on his toughest mission yet. He is tasked with killing one of their own, following evidence to suggest that fellow assassin Jessica Reel has been turned. She’s leaving a trail of death in her wake including her handler.

The trap is set. To send a killer to catch a killer. But what happens when you can’t trust those who have access to the nation’s most secret intelligence?

Another excellent novel. It offers more of the same, but this time he’s called in to hunt down someone he not only knows, but someone who could be as good as him. I liked the way the story unfolded – even though it was a little predictable (I’m not sure there could have been another trajectory without it being over rather quickly, or disappointing). Getting to know Jessica Reel’s abilities and motivations was well-paced throughout the novel, as was Robie’s eventual confrontation(s) with her. He’s forced to confront the idea that his handlers and employers may have been compromised, or even infiltrated, and Reel’s actions push him to take a leap of faith that could save the country, or damn him. It’s rather typical thriller stuff, really, but damn if it isn’t a fun read. I’ve always enjoyed thrillers that are connected with US politics, conspiracies, spies, and so forth, and there aren’t many who come close to being as good as Baldacci.

I don’t want this post to be too repetitive, so I’ll just say that this novel is as good as The Innocent, and I really like the way Baldacci is keeping Robie on his toes, maintaining the ‘realism’ (for want of a better word) of the character and the world in which he operates, while also developing the character and his group of allies and, effectively, family.

If you are a fan of this type of thriller fiction, then this series is (so far), damned good. I really, really enjoyed reading these three books, and can’t wait to get around to The Target, which is out now. Baldacci is easily one of my favourite authors, and if you haven’t tried out his stuff yet, then I strongly recommend you do – either starting with this series, or the Camel Club series.