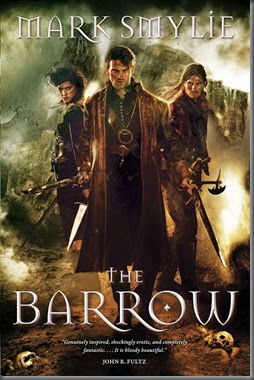 Today, Pyr Books are offering two copies of Mark Smylie’s THE BARROW, with no geographical limitations at all! The novel has been racking up some impressive reviews since its release. In case you aren’t aware of the novel, however, here’s the synopsis…

Action, horror, politics, and sensuality combine in this stand-alone fantasy novel with series potential. Set in the world of the Eisner-nominated Artesia comic books.

When a small crew of scoundrels, would-be heroes, deviants, and ruffians discover a map that they believe will lead them to a fabled sword buried in the barrow of a long-dead wizard, they think they've struck it rich. But their hopes are dashed when the map turns out to be cursed and then is destroyed in a magical ritual. The loss of the map leaves them dreaming of what might have been, until they rediscover the map in a most unusual and unexpected place.

Stjepan Black-Heart, suspected murderer and renegade royal cartographer; Erim, a young woman masquerading as a man; Gilgwyr, brothel owner extraordinaire; Leigh, an exiled magus under an ignominious cloud; Godewyn Red-Hand, mercenary and troublemaker; Arduin Orwain, scion of a noble family brought low by scandal; and Arduin's sister Annwyn, the beautiful cause of that scandal: together they form a cross-section of the Middle Kingdoms of the Known World, brought together by accident and dark design, on a quest that will either get them all in the history books, or get them all killed.

I’m going to keep this simple – the first two people to leave a comment saying they’d like a copy of the book, get the books. Simples. I’ll keep checking back, so if you enter, please be sure to send me your details.