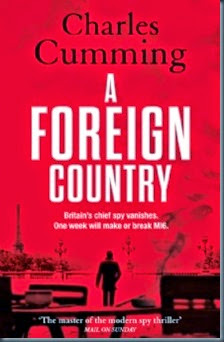 On the vacation of a lifetime in Egypt, an elderly French couple are brutally murdered. Days later, a meticulously-planned kidnapping takes place on the streets of Paris.

Amelia Levene, the first female Chief of MI6, has disappeared without a trace, six weeks before she is due to take over as the most influential spy in Europe. It is the gravest crisis MI6 has faced in more than a decade. Desperate not only to find her, but to keep her disappearance a secret, Britain’s top intelligence agents turn to one of their own: disgraced MI6 officer Thomas Kell.

Tossed out of the Service only months before, Kell is given one final chance to redeem himself – find Amelia Levene, at any cost. The trail leads Kell to France and Tunisia, where he uncovers a shocking secret and a conspiracy that could have unimaginable repercussions for Britain and its allies. Only Kell stands in the way of personal and political catastrophe.

There is always a difficulty, when reviewing thrillers and espionage novels: how much of the plot does one discuss, without fear of spoiling things? Generally speaking, I find leaving the official synopsis at the top tell us what we need quite sufficient.

A Foreign Country delves deep into a miraculously-still-secret hidden past of the newly-nominated Levene. The reader must suspend a certain disbelief that MI6 (or SIS as they refer to themselves) would have completely missed this secret. Nevertheless, certain foreign forces see an opportunity to cause discord in the SIS ranks, and also embarrass its future chief, or “C”.

Filled with interesting operational observations and tactics, the plot moves quickly while never feeling rushed. Cumming is able to appropriately portray just how much of espionage is waiting, and rather uneventful. The author is also adept at bringing foreign climes to life on the page. As events escalate, and as Tom Kell’s investigation uncovers first one revelation and then a second, potentially more deadly revelation, he must match wits against French operatives and also those of unknown allegiance. You quickly become invested in Kell’s present and future (his past is always kept rather vague, rather appropriately), and Cumming’s excellent, focused prose will pull you on through the novel.

Posted by Civilian Reader at 1:32 PM