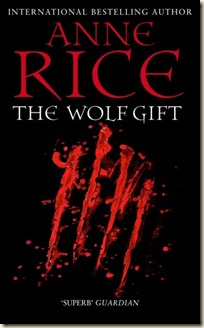 After reinventing the Vampire for modern literature, Anne Rice turns her attentions to Werewolf mythology with great success

After a brutal attack Reuben finds himself changing. His hair is longer, his skin is more sensitive and her can hear things he never could before.

Now he must confront the beast within him or lose himself completely.

I’m sure I’ve mentioned it before on the site, but Anne Rice is one of my favourite authors. Reading the Vampire Chronicles was a turning point in my life as a reader, and indeed set me on the path that turned me into as voracious a reader as I am today. The Vampire Lestat and Queen of the Damned have been re-read so many times, I almost know them off by heart. It was with great interest, therefore, that I started reading The Wolf Gift – after redefining vampire fiction with her novels, I was really interested to see what Rice could do with that other supernatural mainstay, the werewolf. What she’s come up with is pretty great.

As the story opens, our protagonist, Reuben, has been sent by the San Francisco Observer to write a piece about the uncertain future of the giant house at Nideck Point. He quickly falls in love with the grand mansion, and also a little with the elegant heiress, Marchent Nideck. It is a chance encounter between two unlikely people, one that leads to a magical evening that ends in a brutal and bloody attack. Stumbling about in the dark house, Reuben is bitten by an unseen beast. As dawn breaks, he is whisked to a San Francisco hospital (his mother is a leading surgeon, luckily). Kept under observation, Reuben starts undergoing a terrifying yet seductive transformation. His family and doctors are confounded by his recuperation and apparently-altered state.

Reuben’s transformation quickens after he leaves the hospital, and he soon assumes – temporarily each night – a savage, wolfen aspect. Strangely (and this is something that really set The Wolf Gift apart from Rice’s contemporary authors dabbling in werewolf fiction), in this were-state, Reuben develops the ability to sniff out, literally, evil. What follows is Reuben’s attempt to reconcile the beast component of his new gift and his apparent drive to do good. After the attack at Nideck Point, his editor assigns him the job of writing about each new “Man Wolf” attack and sighting. His nightly activities have San Franciscans and, eventually, others much further afield, enthralled: a Wulfen Super-Hero? Who has heard of such a thing? In addition, Reuben, with the help of a new ally and love-interest, attempts to find out more about his progenitors and his specie’s history. What is the connection with the mansion? How many others like him are there, prowling the night?

The story is fast-paced, and is nigh-impossible to put down. I really loved the overall pacing. Specifically, the fact that Reuben’s change isn’t sudden, nor is it particularly dramatic. He retains his humanity and mental faculties, and experiences heightened senses overall. He retains his personality, power of speech and so forth. I am particularly happy that Rice doesn’t have him turn into some over-sexed, cavorting, hirsute boy-toy.

As with the author’s vampire series, there is a sensual/sexual component to Reuben’s new state, but it is more a general pleasure at his new aspect and abilities, coupled with a near-orgasmic feeling that overcomes him during the change. It’s easy for a non-fan to poke fun at the current state of vampire and werewolf fiction, and the tendency for authors to, effectively, introduce these beasties into stories that are little more than Mills & Boon with supernatural overtones. Thankfully, Rice does not do this, and once again shows just how much can be done with these classic horror-creatures. This is a highly-original take on the werewolf mythology, and is as atmospheric and engrossing as her previous novels.

I’ve never really been able to put my finger on what it is, specifically, about Rice’s writing style and stories that hooks me so completely. The author’s prose is always expertly crafted, very fluid and her characters are always three-dimensional and stand-out examples of whatever type they have to be. The cast of The Wolf Gift is no exception. Reuben, his family, Laura, Felix et al, are all interesting, three-dimensional characters.

The Wolf Gift really offers a great reinterpretation of the werewolf myth: it’s very Rice-ian, in that it has far more nuance and grounding in mysterious, supernatural history. In fact, I think I only have one niggle with the novel, and that is that I think the book could have been longer. Rice’s descriptive passages were more sparse than I have come to expect from the author.

An interesting break with the norm for ‘origin’ stories, is that instead of front-loading the novel with history and bringing us up-to-date, Rice makes us wait, building up the narrative nicely to a very philosophical ‘history’ at the end. I think I would have preferred more history, but that comes from a deep, abiding affection for the author’s Vampire Chronicles and the historical portions of those tales. Whether Lois’s, Lestat’s, Marius’s, or Enkil & Akasha’s histories, they remain some of my all-time favourite passages – I have yet to find an author who can write the past as seductively and atmospherically as Rice.

It would be no exaggeration to say that the Vampire Chronicles marked a huge turning point in my reading (tastes and habits – never before did I spend hours on end, and days at a time reading one author’s books). And, multiple reads later, they are novels that have lived up to my fond memories.

Where Rice’s vampires were largely loners, or only tolerable of company for shorter periods of time, her werewolves are inherently pack animals. How Reuben straddles his past life and his new one is very nicely done. Her other characters find themselves in similar situations. The way they handle Reuben’s changes are also interesting: his surgeon mother, struggling to make sense of test results (or lack thereof), unable to understand what’s happening to her “Sunshine Boy”. His priest brother, whom he confides in, struggling to place Reuben’s new aspect within his belief system. Only one character’s interactions with Reuben were a little difficult to accept: Laura’s acceptance from first sight never rang true for me – I think I know what Rice was aiming for, but it needed more time to develop, in my humble opinion. Laura’s arrival in the novel was... surprising, and in the hands of any other author, that relationship would have likely been a disaster of poorly-written “erotic” supernatural bestiality. Stuart’s addition to the story was also rather sudden, and I think his part in the story, and rather rapid introduction, could have done with some better integration.

The Wolf Gift is a perfect example of how supernatural fiction does not have to be Mills & Boon With Beasties. Rice isn’t trying to make us comfortable, and Reuben’s bestial side is vividly portrayed. His vigilante acts are brutal and bloody. Rice really knows how to show-and-not-tell, though, which only makes her novels that much better than so very many of her contemporaries. (Much of what happens is obvious, but the “sex” scenes are very short, and non-graphic, and often off-screen).

Overall, this is a great novel. This is an interesting new set of characters, and I really hope we get to read more about them and the history of these werewolves.