Upcoming: “Grimoire of the Lamb” by Kevin Hearne (Del Rey/Orbit) 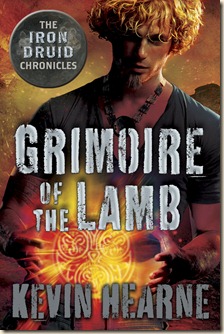 Just caught this via the Twitters, and decided to share it on here. I’m a big fan of Kevin Hearne’s Iron Druid Chronicles – despite having only read the first two, and being really slow about getting to the rest. Hearne announced today that there will be a new eNovella, GRIMOIRE OF THE LAMB, released on May 7th, 2013, in the U.S. Here’s what the author wrote on his website:

“This is an eBook novella on sale at Amazon, B&N, Kobo, iBooks, etc., for $2.99. It’ll be available in the UK, Australia, and affiliated territories too, albeit with a different cover, and I believe (but haven’t confirmed) that it will be on audio too in the US & Canada...”

So it will be arriving in other territories, hopefully around the same time. With regards to the story, Hearne wrote,

“It’s set in 2005, four years before HOUNDED. Aenghus Óg hasn’t found him yet, Granuaile isn’t bartending at Rúla Búla, but we do get a cameo from the widow MacDonagh.”

When he’s not vanquishing villainous gods or dodging demons, two-thousand-year-old Druid Atticus O’Sullivan can be found behind the counter of Third Eye Books and Herbs in modern-day Tempe, Arizona, literally minding his own business. But when an evil sorcerer – and amateur shoplifter – snatches an ancient Egyptian tome of black magic, The Grimoire of the Lamb, Atticus is not sheepish about pursuing him to the ends of the earth… or at least to the Land of the Pharaohs.

Unfortunately, Atticus already has enemies in Egypt – including cat goddess Bast, who wants her own book of mischief back from the Druid. In the streets of Cairo, she sends a feline phalanx after Atticus and his Irish wolfhound, Oberon. With fur still flying, Atticus must locate the sorcerer’s secret lair – where he will face killer crocodiles, spooky sarcophagi, and an ancient evil Egyptian who’s determined to order the sacrificial lamb special tonight.

Atticus in Egypt? Count me in. If you haven’t read any of the series before (shame on you!), then this could be a great point to give it a try.

Also on CR: Reviews of Hounded and Hexed, and an Interview with Kevin Hearne

Posted by Civilian Reader at 2:55 PM