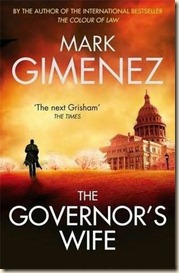 Have you ever wondered how one split-second decision could change your life for ever?

The Bonners are the most powerful couple in Texas. Bode Bonner is the Republican Governor and his wife, Lindsay, is always by his side. From the outside everything looks rosy.

But the Bonners are not happy. Bode is bored – he longs for more excitement in his life. Lindsay is at the end of her tether. She’s had enough of Bode’s womanising and of playing the dutiful wife. She is desperate to break free of her bland, wealthy lifestyle.

Then Lindsay makes an impulsive decision that helps save the life of a poor Hispanic boy. From that moment on, nothing will be the same for the Bonners. Everything is about to change...

I’m a fan of Gimenez’s thrillers. I’ve read a couple of his previous novels, and they struck me as well-paced and addictive thrillers. The Governor’s Wife is no different (I read it in three sittings), and has the quick plotting I remember from his past work. This latest book is a little unusual, though, in that around the half-way mark it seems to change its mind about what sub-genre of thriller it wants to be in… Nevertheless, this is an enjoyable read.

The first half of the novel is a steeped-in-politics, character-driven story. The Governor of Texas, Bode Bonner, is a Rick Perry-type, but with an added dash of Bill Clinton-esque proclivities. In fact, Perry is the only G.O.P. primary candidate not mentioned in the novel, along with T-Paw (Tim Pawlenty to his mum). And there is a lot of mention of the 2012 Republican field of presidential candidates. In fact, this may be the novel with the most politics written into it that I’ve read in a good number of years – more so even than novels I’ve read about murders in Washington, D.C. Politics, and specifically Texas politics are clearly very dear to Gimenez’s heart, and perhaps also a passion of his, as he writes a good number of passages that lay into America’s political polarization and frequent dysfunction. He also takes square aim at the role of money in US politics.

“Bode… You used to be a Democrat when Democrats controlled Texas. Then you switched to Republican when Republicans took over Texas. Now you’re a tea partier because they’re sweeping across Texas. That’s what politicians do, at least the ones who win elections: they ride the wave…. Politics isn’t about what you believe; it’s about winning elections. The tea party is a political opportunity. It’s the wave. Today. But that wave always dies out, and the tea party will, too. And all those middle-class folks will go back to work and church and the PTA and get on with their dull lives out in suburbia and leave politics to the professionals.”

We’re quickly introduced to Bonner's character: he sleeps around with his young female aides half his age, and also is entirely self-involved. He’s governor, but not sure why. He’s in it for the thrill of winning, only that’s started to lose its lustre.

He fingered the massive UT college football ring that rode his big right hand like a hood ornament; the memories of football flooded his mind. Sitting in the Governor’s Office and recalling those glorious moments now, Bode couldn’t believe how life had let him down. He leaned back and kicked his size 14-EE hand-made elk skin cowboy boots up onto the desk. He had big feet because he stood six feet four inches tall and carried two hundred and ten pounds, his playing weight. He had blue eyes and good hair. He worked out at the YMCA and ran five miles around the lake every day. He had a working prostate and a valid Viagra prescription. Bode Bonner possessed the strength and stamina and sexual drive to keep up with men half his age. And women. He was still young enough and strong enough and willing enough to live life. He just needed something to do with his life.

“What am I gonna do the next four years?”

“Same thing you did the last four years … Nothing.”

This self-pitying only gets worse:

“Sam Houston thought power should reside in the legislature, so the state constitution provides for a weak executive.”

“Doesn’t provide for much excitement.” Bode shook his head. “I love the guy, but old Sam screwed the pooch on that one. I mean, what the hell is the governor supposed to do for four years? I can’t play golf every day—some days it rains.”

When not discussing Texas and Republican politics, the novel features a lot of information about the “colonias”, those no-man’s-land areas between the Mexican and US border, where poverty and violence are sky-high. After the guided tour of Texan Politics, we are given a tour of this locale, as the Governor’s wife is shown around. Lindsay has decided to do something worthwhile for the state, and has selected this area as her pet project (but not in as shallow a manner as that would sound, nor as shallow as her husband’s decision-making can be). While Bode sits and pouts back in the Governor’s Mansion in Austin, his wife is going to get out there and do something. She effectively disappears from Austin, settles down in the local doctor’s guest house, and grows rather fond of the saintly colonias doctor. Things could get tricky for her and Bode’s political aspirations.

There is an air of desperation to Gimenez’s writing about the state of Texas society, politics and education. There are a number of scenes in which Bode or one of his political colleagues has to consider the state of Texas schools, drop-out rates, incarcerations, executions, poverty, crime, and of course the fact that the great state of Texas is flat broke. (“The only way to save our state is to educate our kids. If we don’t educate them, we’re going to incarcerate them.”) He is even-handed in laying the blame, but given the GOP’s stranglehold on the Lone Star State’s political institutions, much of the fault has to lie with that party. Where the Democrats get dinged is from the national level, and there are a fair few comments about national Democrats, and also President Obama, treating Texas as a Republican opponent, rather than part of the whole United States.

The second half of the novel shakes things up quite a bit. Without delving into the plot details or offering spoilers (of which there could be a great deal), the story morphs into much more of an action movie. A powerful drug-lord in Mexico is roped into the story, after Bode makes a decision to save some kids (yes, that’s vague). Bode has a rather strange religious awakening, late in the novel, which I thought was a bit odd. Perhaps an attempt to have him tick off all of the shallow career-driven politician boxes?

There’s a strain of dark, gallows humour running through the novel – and Gimenez uses it best to highlight how out-of-touch politicians (of both parties) can be.

Things take a turn almost for the excessive as we near the end of the novel (there are surprising deaths, a shoot-out at a popular breakfast spot, a blood feud, and much more). I was expecting something a little less of an action-oriented plot, as a result of the early politics-heavy chapters. That’s not necessarily a bad thing, as I think Gimenez did a good job of handling the shift in pace, and I quickly readjusted my expectations for the escalation in events. I think I just would have preferred more of a political- than action-thriller.

Nevertheless, I read the first 75% in one sitting (I had to eventually go to sleep, though), and quickly polished off the remainder the next day. It’s a very well-paced and tightly written novel. It taps into pretty much everything one could want from a thriller, ticking off a few classic tropes and implementing them into the narrative rather well. The drug lord should have been a cliché, but he didn’t feel like one. The story between Lindsay and the doctor was predictable, but I didn’t mind. Bode’s development as a character was interesting, and overall done rather well.

The Governor’s Wife certainly matches the quality of the author’s previous work, and some may consider it his best. Recommended for thriller fans, and especially those who like a lot of political commentary in their fiction. Which I do. So that worked out very well.