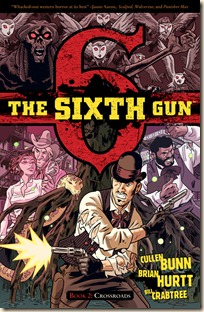 In the aftermath of the tragic battle of the Maw, Drake and company hide in the sprawling city of New Orleans. But as they plot their next move, they find themselves embroiled in another harrowing adventure. Unexpected threats, new enemies, and a host of strange spirits are already aligning against them.

This is just a really quick review – it’s actually been a while since I read this (and have since blitzed through the next two), but I wanted to mention it on the blog. The Sixth Gun is one of my favourite series, hands down. This makes it very tricky to review. So much of my enjoyment comes from the surprises and unexpected directions the story takes, as well as the excellent dialogue, plotting and artwork. Needless to say, if you like supernatural tales in a Wild West and 19th-Century American setting, then The Sixth Gun is a must-read.

“Crossroads” gives us an expansion on the already-awesome supernatural elements introduced in Volume 1 – this time, we get some voodoo and Southern weirdness, which I always like to read about. There are swamps and strange Haitian-inspired beasties, as Drake attempts to find a way to rid himself of the pistols (he has collected a four of them, from the cold, dead hands of their previous owners). Adding to Drake’s impatience (and Becky’s, as she owns one of the Six as well), evil forces will forever be drawn to the Six, and with only the chance of passing them on from a dead (wo)man’s hand, things are going to get very dangerous for them. 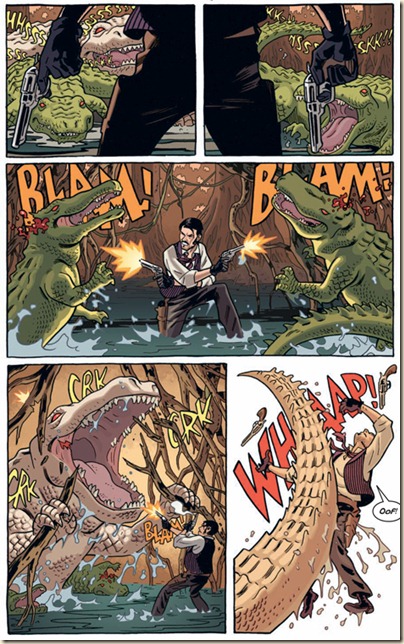 We meet a new face, a potentially a recurring character: a smooth-talker who Becky maybe takes a shine to. He has an ulterior motive, however, and he quickly becomes involved in the hunt for the Six. 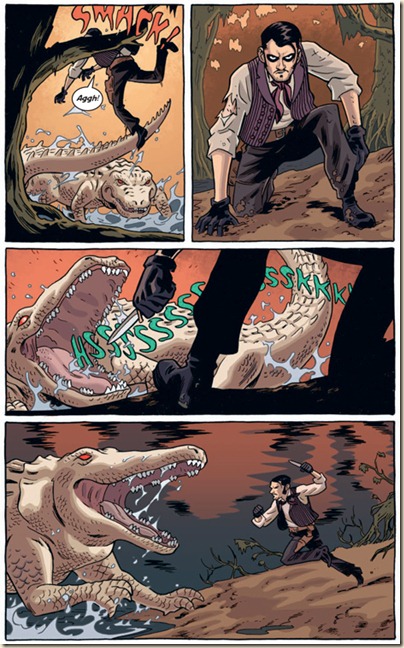 I really love that Bunn & Co. are deepening and expanding the series mythology. The Sixth Gun is a great series, and “Crossroads” does exactly what a second volume is meant to do: it builds very nicely on what has come before, and lays down the foundation for yet more action and dark adventure to come.

Posted by Civilian Reader at 8:17 PM