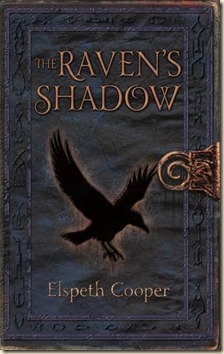 I’ve not been very good at keeping up with Elspeth Cooper’s Wild Hunt series. I enjoyed Songs of the Earth, but still need to catch up with Trinity Rising, the second novel in the series. The Raven’s Shadow is the third of four novel in the series, and will be published in August 2013. Here’s the synopsis:

They are rising over the snowy Archen Mountains, where Teia struggles through the high passes to carry her warning to the Empire: the Nimrothi war band is poised to invade and at their head stands Ytha. She means to release the Wild Hunt – and with it Maegern the Raven, the Keeper of the Dead.

In the desert of Gimrael, the moons are rising over the fires of revolution – flames that have already robbed Gair of a friend and left him alone in a hostile city, unsure even if the Song is still his to command. He has one last duty to discharge, and then nothing will stand between him and his ultimate goal: vengeance.

And in the Nordmen’s chilly halls, Savin plays out a game in which kings and chieftains and men are but pawns on a chessboard that spans the Veil itself.

Three moons are rising. When the trinity is complete, the endgame will begin.

The fourth-and-final book in the series, The Dragon House is due to be published (according to Amazon UK) one month after this, in September 2013… Not sure if that can be right. Regardless, this is an interesting series, and well worth your attention.

UPDATE: Just heard back from Elspeth – this is not the final artwork, but just one that Amazon UK has used and that seems to be doing the rounds on the internet. And, also, book four will be published in 2014. Updates to follow, as-and-when information becomes available. I also inserted a new synopsis, provided by the author, substituting it for the Amazon UK synopsis (below).

Sometimes those with the greatest potential must withstand the hardest blows. Fate, it seems, has nothing kind in store for Gair. First his lover and now his mentor have been killed – the first by the dangerous, ambitious Savin, the second in a revolutionary uprising. Alone, and with even his magical abilities betraying him, he has only one goal left: revenge. Far to the north, if Teia has one goal it is survival. Attempting to cross a high mountain pass in the teeth of winter is an act of desperation, but the message she carries cannot wait for spring. An invasion force is gathering behind her, and only an ancient order of knights can hold them back. The danger is real, there are enemies in the shadows, and time is running out...

Posted by Civilian Reader at 9:04 PM