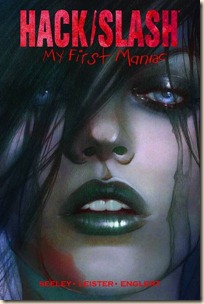 Exploring Cassie Hack’s first case: 16-year-old Cassie has just been forced to kill her mother, the undead murderer known as the Lunch Lady! Now faced with overwhelming guilt, she must decide if she can make a life with her foster parents and at her new school, or if she should use her new-found slasher-killing skills to save other screaming teenagers! But does the apple fall far from the tree?

I don’t think I’ve read much else by Tim Seeley – maybe a taster for his new run on Witchblade. But, the other day I saw that Hack/Slash has finally come to an end, and decided to give it a try. Image Comics only published the final 25 issues of the series, plus a couple of mini-series spin-offs. Unable to hunt down the pre-Image comics on ComiXology, I decided to pick up this spin-off, dealing with Cassie’s first case. And I rather enjoyed it, in all its bloody, slasher-movie bonkers glory.

I’ve been trying to figure out how to characterise the overall feel I get from this book. A grimdark Buffy? Someone on argued that Buffy was already rather grimdark. So a grimdarker Buffy? Perhaps. I guess the series’ strength is that it can’t so easily be defined. It draws from many strong traditions of slasher-/horror-movies, adds a dollop of dark, dark humour, and spits out something rather original and engaging. It doesn’t shy away from the uglier side of human nature (of any age or social grouping), and Cassie goes through a lot of hell to grow into the monster-hunting/-slaying bad-ass she is at the end.

The series packs a lot into the first issue. But, this doesn’t slow things down at all. Instead, it makes for a substantial, intriguing and gripping introduction to this world. Cassie’s in foster care, and the issue tells of how she came to strike out on her own. The story of the rest of the mini-series develops as she moves around to Buffalo Center, chasing after rumours of a lurker. It’s brutal. It’s visceral. It’s very good. 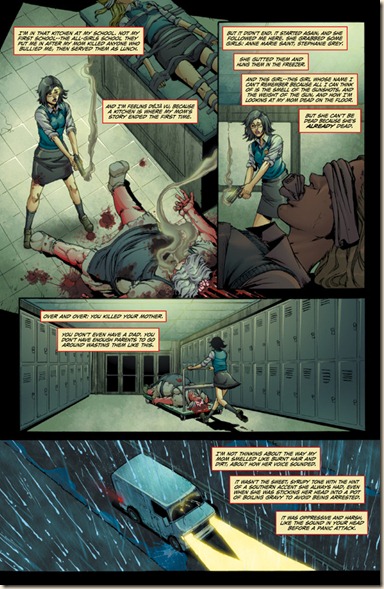 In Buffalo Center, Cassie connects with a couple of the local in-crowd, one of which helps her develop her goth-chick look. There’s a rumor surrounding an old farm on the edge of town. And kids are going missing… I didn’t predict how the story was going to develop, and there were a couple of interesting surprises sprinkled into the story. 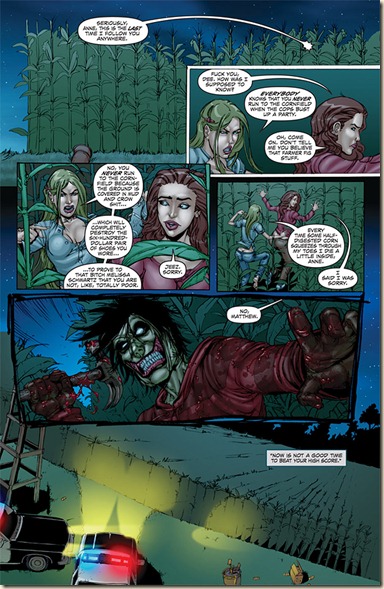 Seeley has injected a good, dark sense of humour into the book. It’s sometimes very dark, but always amusing. It’s not riotous, but I smirked and chuckled a couple times. It’s not exactly deep, but I can certainly see the beginnings of something complex and addictive. Seeley & Co. have created something pretty special and unique, here.

Overall, I enjoyed this quite a bit. The art style is reminiscent of some of Zenescope’s covers and internal art, but the story is much stronger (in some ways, this is more mature – like Buffy meets Eli Roth in a dark alley, before they stumble into a Stephen King novel...). It’s definitely not for kids, or the too-easily scandalised or shocked. But, if you like horror fiction, movies, or comics, especially ones with a self-conscious, knowing sense of humour, then Hack/Slash could be the perfect comic for you.

I’ll definitely be reading more of this – and, in fact, by the time this review goes live, I will have read the first Image collection, “Vol.9 – Torture Prone”.