Upcoming: “The Black Guard” by A.J. Smith (Head of Zeus) 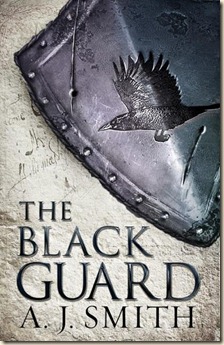 There’s been a little bit of buzz surrounding this novel, but not as much as I’ve expected. The Black Guard is the first in A.J. Smith’s The Long War fantasy series.

I actually read a little bit of a very early version of The Black Guard on submission when I was interning at a publisher last year, only to discover that Head of Zeus had already picked it up. Nevertheless, I was happy to learn it was going to make it to the shelves, and I look forward to reading the final version.

The Duke of Canarn is dead, executed by the King’s decree. The city lies in chaos, its people starving, sickening, and tyrannized by the ongoing presence of the King’s mercenary army. But still hope remains: the Duke’s children, the Lord Bromvy and Lady Bronwyn, have escaped their father’s fate.

Separated by enemy territory, hunted by the warrior clerics of the One God, Bromvy undertakes to win back the city with the help of the secretive outcasts of the Darkwald forest, the Dokkalfar. The Lady Bronwyn makes for the sanctuary of the Grass Sea and the warriors of Ranen with the mass of the King’s forces at her heels. And in the mountainous region of Fjorlan, the High Thain Algenon Teardrop launches his Dragon Fleet against the Red Army. Brother wars against brother in this, the epic first volume of the long war.

It’ll be interesting to see how this shapes up. It’ll be released as a Special Edition and also a “standard” Hardcover in August 2013.