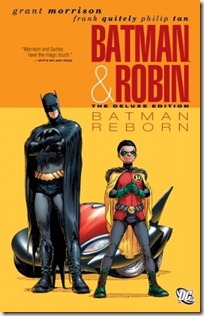 The new Dynamic Duo hit the streets with a bang in their new flying Batmobile as they face off against an assemblage of villains called the Circus of Strange. They also tackle their first mission investigating a child who’s been abducted by the mysterious Domino Killer. But will everything go smoothly? And who exactly are the new Batman and Robin? The newest era of The Dark Knight begins here!

Grant Morrison has the tendency to be awarded the privilege of writing momentous moments in the ongoing DC chronology. Sadly, I have yet to read any that have lived up to expectations. With the recent publication of the New 52 Batman Incorporated #8, I decided to catch up on some more of Damian Wayne’s tenure as Robin, and chose this as a starting point. It’s not terrible, but nor is it as strong as I would have liked. In other words, it’s exactly what I should have expected from a Morrison-penned comic…

Bruce Wayne is dead. After his death at the hands of Apocalypse in Final Crisis, Dick Grayson (former Robin and Nightwing) has assumed the Bat-mantle. As this series begins, it’s his first week on the job, and he’s nervous as hell. Damian isn’t helping matters, as he doesn’t respect Dick too much, or at least, he does only grudgingly. Damian goes off-mission frequently, and reacts badly when Grayson cautions him (“Look at you! The pathetic impersonation of my father makes a mockery of his memory! Keep your clues and your ‘detective skills’ and your limits.”). 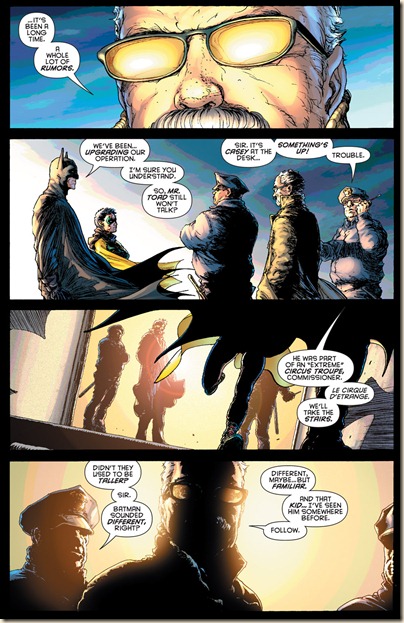 At the start, our caped heroes are chasing after Toad, some kind of a mutant criminal. He’s working for Professor Pyg, the leader of an extreme circus troupe, “Cirque d’Etrange”. The first three issues/chapters of the book deal with this first mission for the new Batman and Robin. It’s ultimately drug-related, but I never felt it was as well-developed as it could be. It felt quickly over, and we’re just expected to accept what we’re told. I think there could have been a lot more meat to the story. 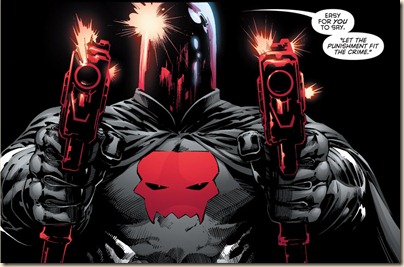 The second story, “Revenge of the Red Hood”... Well, this left me a little confused – is this the old Red Hood (last seen in flashbacks in the superb The Killing Joke), or the new Jason Todd Red Hood? Batman clears things up at the end of #4 and Robin also clarifies (“He looked different the last time we slapped him around.”). The Red Hood has adopted the last surviving victim of Professor Pyg, and given her a new mission and a new name: Scarlet. Together, they are taking a very hard line on Gotham crime, tear a bloody swathe through the underground elements of a city teaming with criminals and a society with a vast sea of dregs. It builds in a strange way, and I think the introduction of the Flamingo was the first sign of things reverting to the… less-good Morrison norm.

I did really like the way Morrison writes Grayson’s angst and anxiety over assuming the Batman role, especially towards the beginning, and also Alfred’s support is well-written and heartwarming. As always, the personal relationships are far more interesting (not to mention better-written) than anything else Morrison deals with in his stories. Jason Todd was rather cartoony. A pity, as he’s one of my favourite characters in the Bat-family. 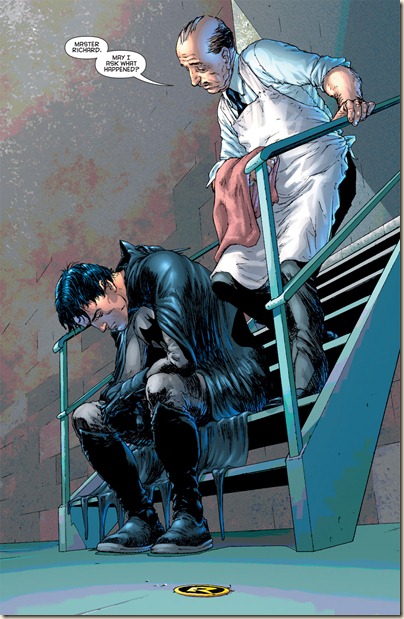 Professor Pyg and his evil henchmen, not to mention Toad as well, are just... Well, silly. This is, as usual, the problem with Morrison’s comics. He has some great bits that are ruined by distracting silliness and poor execution. I still contend that Morrison has a streak of authorial laziness in him – for example, an aerosolized pathogen, at the evil genius’s lair, and Batman finds a test tube marked “antidote” right beside it – this can sometimes be funny, but it seemed to me that Morrison was just not interested in devising a more interesting, original solution to his story. He too often goes for the easy fix (although, at least he wasn’t responsible for the truly awful Letter Finale to Superman: Red Son). It’s also as if Morrison feels he needs to exaggerate certain things, when he’s obviously capable of nuance, in order to... Actually, I don’t know how to put this without demeaning the medium, but in order to ‘make it a comic’, and differentiate it from prose. Or something. It’s maddening. Thankfully, there was some good, gentle humour as well sprinkled throughout this book, which helped diminish the impact of some of the more annoying things contained within. 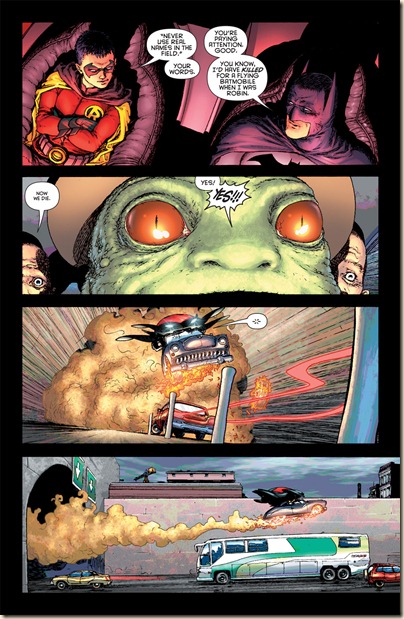 Batman & Robin Volume 1 is some of the better Morrison stuff I’ve read. I’ve picked up the next two volumes (they were on sale a while back on ComiXology), and will review them together.

If you love everything Morrison writes, I have no doubt you’ll like this. If you do not, then I can’t guarantee you’ll like this, either. But, it is among his better-quality work.

Posted by Civilian Reader at 8:59 PM