With a number of exciting releases on both sides of the Pond, it looks like 2013 is going to be a very good year for British author Sarah Pinborough. 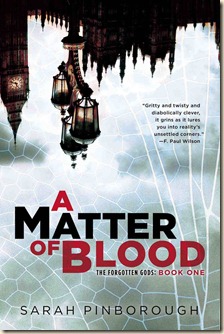 First up, and already out in the UK for ages (published by Gollancz in 2010), we have the author’s critically-acclaimed A Matter of Blood will now be hitting shelves in the US.

In a world steeped in darkness, a new breed of evil has fallen…

London’s ruined economy has pushed everyone to the breaking point, and even the police rely on bribes and deals with criminals to survive. Detective Inspector Cass Jones struggles to keep integrity in the police force, but now, two gory cases will test his mettle. A gang hit goes wrong, leaving two schoolboys dead, and a serial killer calling himself the Man of Flies leaves a message on his victims saying “nothing is sacred.”

Then Cass’ brother murders his own family before committing suicide. Cass doesn’t believe his gentle brother did it. Yet when evidence emerges suggesting someone killed all three of them, a prime suspect is found – Cass himself.

Common links emerge in all three cases, but while Cass is finding more questions than answers, the Man of Flies continues to kill...

This is the first novel in Pinborough’s Forgotten Gods series (which I shamefully have not yet read). In the UK, the series title was The Dog-Faced Gods. A Matter of Blood is followed by The Shadow of the Soul (August 2013) and The Chosen Seed (December 2013). As a bonus, here are the three UK covers for the series: 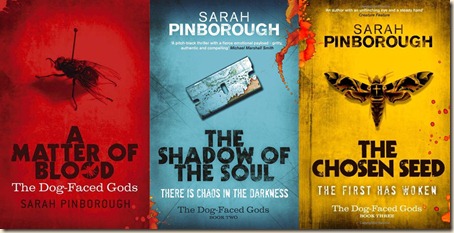 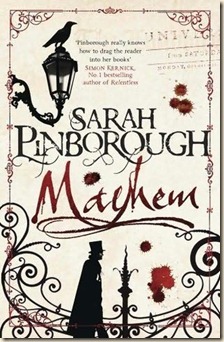 While North Americans will be able to finally get their hands on this trilogy in 2013, Brits will also be treated to Sarah’s latest novel, Mayhem (April 25th, published by Jo Fletcher Books)

When a rotting torso is discovered in the vault of New Scotland Yard, it doesn’t take Dr. Thomas Bond, Police Surgeon, long to realise that there is a second killer at work in the city where, only a few days before, Jack the Ripper brutally murdered two women in one night.

Though just as gruesome, this is the hand of a colder killer, one who lacks Jack’s emotion.

And, as more headless and limbless torsos find their way into the Thames, Dr. Bond becomes obsessed with finding the killer. As his investigations lead him into an unholy alliance, he starts to wonder: is it a man who has brought mayhem to the streets of London, or a monster?

This sounds really cool, so I’m going to try to get a review done A.S.A.P.

And finally, Pinborough also has three novellas – Poison (April 18th), Charm (July 18th) and Beauty (October 17th) – coming out this year in the UK, to be published by Gollancz. Here are the complete covers for the three, which have been described as “absolutely superb, fun, mischievous novellas”: