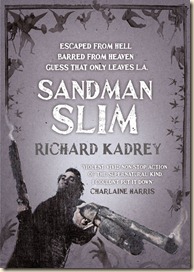 Urban Fantasy the way it was always meant to be…

Life sucks and then you die. Or, if you’re James Stark, you spend eleven years in Hell as a hitman before finally escaping, only to land back in the hell-on-earth that is Los Angeles.

Now Stark’s back, and ready for revenge. And absolution, and maybe even love. But when his first stop saddles him with an abusive talking head, Stark discovers that the road to absolution and revenge is much longer than you’d expect, and both Heaven and Hell have their own ideas for his future.

This is the first in Kadrey’s Sandman Slim series, and it’s taken me long enough to get to it. But I’m very glad that I have: it’s awesome. Brutal and grim, this is a very different UF novel, that shies away from the current trajectory of the genre while embracing some of its best tropes. I really enjoyed reading this novel.

One of the first things that you’ll notice when you start reading Sandman Slim is Kadrey’s very fluid, stripped-down prose. The author has created a lean novel that readers will fly through. It’s not so lean that Kadrey doesn’t indulge in some very colourful similes and metaphors (most of them will elicit a chuckle, if not a laugh of dark delight).

The story starts with Stark’s resurrection somewhere in Los Angeles. It’s hot and too bright, and he’s a little disoriented. Then someone stumbles into him, sort-of-attacks him, and Stark comes out on top with some cash and a new jacket. All-in-all, not a bad start to a new life… Things don’t really let up from there, as Stark ricochets from one encounter to another – mixing in new friends and old acquaintances (not all friendly). Kadrey manages to provide a very good introduction (with just a couple of info-dump moments) to the world of the Sub Rosa, Los Angeles, Heaven, Hell and the colourful fauna who inhabit these environments, while also keeping the narrative pace ramped up.

The novel ticks off a fair few UF tropes (including the 11th hour be-mean-to-your-friends-&-allies-in-an-attempt-to-distance-yourself-from-them). But this adherence to the genre norms is mixed in with some very good horror elements, an insouciance that is infectious, and a host of original and irreverent additions that help it well-and-truly stand out from the pack. There’s no romance: the closest we get to it is Stark’s occasionally roving eye, some post-combat urges, and that’s about it. (Our protagonist is, after all, on a mission of revenge – to kill the people who caused his ex-lover’s death.) In some ways, the novel has some surface similarities to The Crow, as Stark comes back from the dead to wreak vengeance on those who caused his and his lover’s deaths. When we find out what’s really going on, though, it’s very cool and takes on a much, much larger scope.

One thing that took me by surprise, is the time it takes for us to first hear (read) the name “Sandman Slim” – it comes relatively late in the novel, when another character refers to Stark thus and he is quite confused. It turns out, Stark’s time in Hell has made him something of a legend among the demons, angels and Sub Rosa. He is “the monster who hunts monsters”.

The ending is pretty superb – it’s big, ballsy, and even has some depth as well (presented in a refreshingly non-shoe-gazing manner). We’re given plenty of information and some really intriguing revelations regarding Stark himself that I’m eager to see play out in future novels.

Crazy angels, a gentlemanly Lucifer, a talking head, and so very much more… Sandman Slim is a perfect anti-hero for this age, and this is a must-read series for fans of Urban Fantasy, horror and the supernatural. Kadrey’s definitely an author I am going to be reading a lot more of. This is what I always wanted Urban Fantasy to be. I’ll be reading the second book, Kill The Dead, very soon (followed shortly afterwards by Aloha From Hell, Devil in the Dollhouse and Beat the Devil).

The first four books in the series are now published by Voyager in both the US and UK – Devil in the Dollhouse, an e-novella, is available in both territories as well (and maybe others? I’m not entirely sure.) 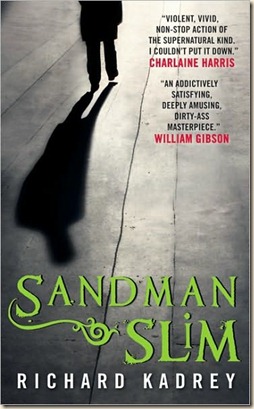