“My Fear of Blueberries, or Why I Write Fantasy” by Evie Manieri (Guest Post)

Today I bring you a short piece by Evie Manieri, the author of Blood’s Pride – the start to an epic fantasy series with some really great twists on fantasy tropes and a lot of originality. So without further ado…

My Fear of Blueberries, or Why I Write Fantasy 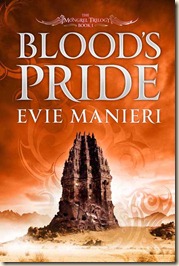 I’ve never given much thought to why I write fantasy. I’ve never felt like I had much choice in the matter; everything I write just comes out that way. Still, I’ve noticed that people who haven’t read much (or any) genre fiction assume that it’s a form of juvenile escapism, and I take exception to that. Speaking for myself, nothing could be further from the truth, and to explain, I’d like to talk about my blueberry problem.

Every few weeks, my self–esteem rises to the point where I believe myself capable of dealing with a carton of blueberries. I buy them, bring them home and stuff them into the produce version of the Green Mile that is my vegetable drawer. A week later, when they’re nestled in a snowy cushion of mold, I throw them away. I keep buying them because they’re good for me and I like the way they taste. I throw them away because you never know until you bite down on a blueberry if it will be sweet or sour and to what degree, and I can’t cope with the lack of predictability.

Predictability offers only the illusion of control. I know that. I know that I’m fine as long as my predictions match up to reality, and that when they do not, I lose trust in all of my assumptions and the most mundane things become a source of anxiety. I know that I have to make a concerted effort not to avoid situations with too many variables – just like I avoid blueberries. 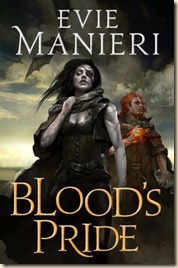 You might think, then, that I write fantasy so that I can construct every aspect of the universe to my liking – but that’s not it at all. I don’t look to fantasy to escape my worst nightmares; I go there to let them out of the closet and poke at them with a stick. A story isn’t something static and lifeless; it’s not a doll’s house or a jigsaw puzzle. Anything can happen in a story, and in no genre is that more true than in fantasy. The most fundamental truths can be turned upside–down in a moment without straining credulity. How would I survive if something came along and smashed every one of my assumptions to bits? How would I cope if I discovered that I’d based my understanding of the world on misconceptions and lies? No, fantasy isn’t my playground – it’s my war room.

Blood’s Pride is published in the UK by Jo Fletcher Books (out now), and in the US by Tor Books (February 19th 2013).

Also on CR: Review of Blood’s Pride and Interview with Evie Manieri