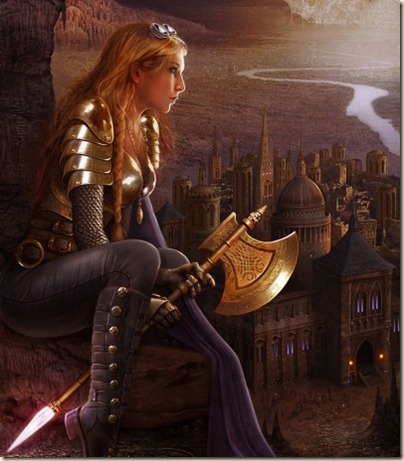 Dungeons & Dragons is one of fantasy and gaming’s mainstays. Like a number of larger intellectual properties, there are also plentiful novel spin-offs based on the games and worlds. These franchise novels are, in my opinion, gateway drugs to the wider wonders of fantasy and science fiction, and will always have a special place in my heart. To that end, I’ve tried to feature a number of authors who work in the shared worlds (especially Black Library’s). Today, I bring you an interview with Marsheila Rockwell, who writes in the D&D setting that most intrigues me (Eberron).

I thought I’d start off this interview with something straight-forward: Who is Marsheila (Marcy) Rockwell?

Rumor has it that she is a high level operative for an organization so secret it doesn’t even have a name, let alone an acronym. She may also be some (or none) of the following: an engineer who studied simulated lunar soils for NASA; a descendant of William the Conqueror; a refugee from one of America’s largest Superfund sites, and a former mime.

Then again, she might just be a wife and a mother of three. You never can tell with those writer types.

Your most recent novel, Skein of Shadows, was published by Wizards of the Coast this past July. The novel is the sequel to The Shard Axe (2011). Both are set in the world of Dungeons & Dragons. How would you introduce the latest novel and series as a whole to a new reader?

Although the books are set in the D&D world of Eberron (which is also the setting for the MMORPG, Dungeons & Dragons Online), it isn’t necessary to be familiar with the game (either tabletop or online) in order to enjoy them. The novels follow Sabira d’Deneith, a rough-and-tumble Marshal whose bad habits include drinking too much dwarven whisky, losing at cards, and consistently bringing her prisoners in a bit worse for wear. 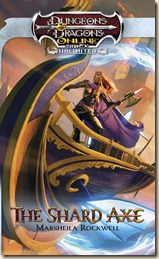 In The Shard Axe, we find Sabira at the bottom of a hole she’s spent eight years digging for herself, ever since her partner died when she had to choose between saving him and saving the dwarf they’d been assigned to protect. When that same dwarf is framed for murder, she has to find a way to face her past and clear his name before the real killer strikes again and puts an entire city in jeopardy. I’d describe this one as a fantasy noir murder mystery with enough snark in it to satisfy the biggest urban fantasy fan.

In Skein of Shadows, the sister of Sabira’s old partner has gone missing while searching for a powerful artifact, and Sabira is tasked with finding both her and the artifact before either of them falls into the wrong hands. This one is more of a classic dungeon crawl with a team dynamic, and has been compared to Kurosawa’s Seven Samurai (which I believe was meant as a compliment, heh). It’s a bit more epic in scope, and in this book, Sabira is no longer dwelling on her past, but is trying to learn how to live in the present again, and maybe even to hope for the future. It’s faster-paced than The Shard Axe and (if possible) there’s even more snark. However, it’s not a direct sequel to that book, and you don’t have to have read the one to enjoy the other. 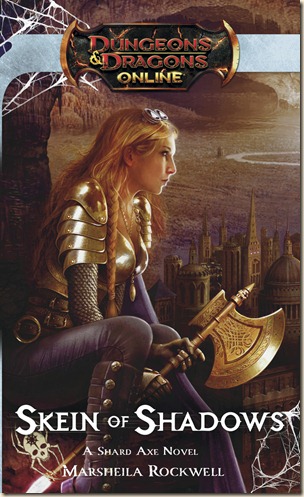 What inspired you to write these particular novels? And where do you draw your inspiration from in general?

I started playing D&D in third grade, and started reading the associated novels when they first came out in the ’80s. Most writers grow up wanting to pen the next Great American Novel – I grew up wanting to be the next R.A. Salvatore (still have a ways to go to meet that goal, heh).

Like most writers, I draw my inspiration from pretty much everything. Other books, TV shows, breakthroughs in science, artwork both beautiful and hideous, dreams, that couple I saw fighting at the mall, you name it. Everything I have ever experienced, and everything anyone I know has ever experienced, is fair game. If you ever wonder why writers always look like they’re not quite paying attention to you, it’s not (usually) because we’re rude. It’s because we’re constantly being distracted by a never-ending idea smorgasbord that calls to us like a lounging siren on a pile of books with our names on the spines. It’s not you, it’s us. Really.

I grew up in a family of readers, and learned to read myself when I was only three. No books were ever off limits to me, but my family read a lot of fantasy and science fiction (and to a lesser extent, horror), so that’s what I started out reading, because it was readily available. Later, I branched out into other genres, but, as they say, you never forget your first. I always come back to SF/F/H and it’s here that I’m most comfortable, both reading and writing.

I always love writing, but I sometimes loathe working within the publishing industry. While you’re writing, you’re fairly autonomous, but once a publisher gets involved, you give up a large portion of control over your work in exchange for whatever they wind up paying you. And the publisher often doesn’t have quite the same vision for your work that you do (because they have to worry about pesky little things like making money and satisfying their customer base). But, overall, next to being a mom? Best job in the world. 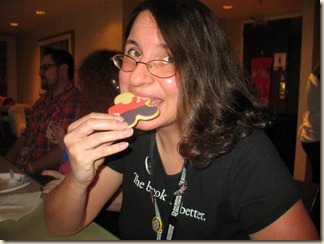 The Gingerbread Red Shirt never had a chance…

As far as how I write, I tend to be very immersive. If I’m writing a D&D book, I spend days combing through source books for just the right setting, or monster, or spell. Even when I’m not working on a D&D book, I still spend a ton of time researching, because it can help generate ideas and also because when I do actually sit down to start writing, I don’t want to have to keep stopping to look stuff up – I want to know it cold. I also outline pretty much everything these days, a habit I got into while working on D&D books, since outlines are basically a contract requirement. And while I can work with cartoons on in the background (having young children, that’s just a survival skill), I can’t write with music playing anywhere I can hear it. Oh, and I usually have to have spider solitaire or hearts or something like that open while I write, to keep my forebrain occupied while my hindbrain mulls over the next scene. My family doesn’t buy that I’m really writing when they see me moving cards around on the screen, but that’s my story and I’m stickin’ to it.

OMGSOFUN! Being a long-time D&D player and a huge fan of the Eberron setting in particular, it’s exciting, daunting, and even a little humbling to be able to contribute to a property that I’ve enjoyed so much for so long. It’s also challenging, because there is a lot of material to absorb and a lot of other people to coordinate with, not to mention a huge fan base that knows the setting as well (or better) than I do. But mostly it’s gratifying to be able to share my love for D&D with so many other people who love it, too.

I don’t remember ever not wanting to write. The first thing that I really remember writing (by hand) was a 20-page Conan pastiche I penned for a school assignment in sixth grade, complete with a princess in distress, a reluctant hero, and a talking cat. I do look back on it fondly, because even though it was derivative and juvenile, I still felt the incredible rush that comes with creating a world of your own and being in control of everything and everyone in it (cue diabolical laughter). Add to that the pure joy of painting fantastical images with words alone, and I was hooked. Hi, my name is Marcy, and I’m addicted to writing stories. Please don’t ever cure me.

I think today’s fantasy in particular gets a bad rap for being too grim and gritty, and there are certainly authors out there who seem to revel in the misery and the body count (*cough* G.R.R.M. *cough*). A lot of my own work falls on the darker end of the spectrum, for a lot of different reasons. But I’ve found that the stories of mine that are most popular are almost always the ones that, while dark, still leave the reader with a sense of hope, no matter how bittersweet. People really do want (mostly) happy endings, I think, even if they have to lose a finger in Mt. Doom to get there. I try to give them that when I can and, hopefully, I’m successful more often than not.

I’m not currently contracted to write any more D&D books, but I do have a series of Arabian-flavored female-centric sword & sorcery stories being put on in eBook form by Musa Publishing. That series is called Tales of Sand and Sorcery, and I’ve been having a lot of fun with it. I’m also working on a paranormal profiler series that I’ve described as sort of a cross between Criminal Minds and Buffy the Vampire Slayer (in tone, not content), with some Guy Gavriel Kay thrown in for good measure. And like every other freelancer out there, I’ve got some irons in the fire that may or may not turn into actual work – we’ll just have to wait and see on those.

The Crime Classification Manual, Profiling: the Psychology of Catching Killers, and pretty much everything written by former FBI profiler, John Douglas. Fiction-wise, I just finished reading my friend Jaime Lee Moyer’s second book (her first, Delia’s Shadow, will be out from Tor in 2013). And I’m looking forward to digging into Gini Koch’s Alexander Outland: Space Pirate and Paul S. Kemp’s The Hammer and the Blade. 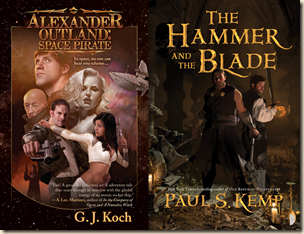 I don’t think there’s much it would surprise my readers to learn about me. Maybe that I voted for Nader in the 1996 election? (But I got better. Heh.)

Finishing the first profiler book before my agent kills me. Being a guest at Phoenix Comicon in May – it’s the highlight of the con circuit in these parts, and the folks there treat the writers like rock stars. Celebrating my tenth wedding anniversary with my newly-minted Navy LCDR husband, hopefully in Scotland (or Gen Con, whichever’s cheaper). And landing the contract to write the first ever Eberron/Forgotten Realms crossover trilogy. In hardcover. (Hey, a girl’s gotta have a dream, right?)