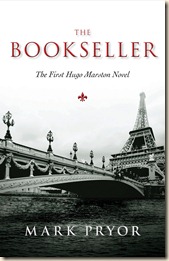 The first in hopefully an ongoing thriller series

Max, an elderly Paris bookstall owner, is abducted at gunpoint in front of his friend, Hugo Marston, head of security at the US embassy. Marston launches a search for Max, enlisting the help of semiretired CIA agent Tom Green when he is confronted with multiple barriers. Together, they investigate not only Max’s past, but also the life and world of Paris bouquinistes. Is Max’s disappearance related to his work or his past? And will Hugo’s investigation threaten his life, too?

This is a pretty good opening salvo from Seventh Street Books. Pryor offers a new, fresh voice in thrillers, while working very much within the genre’s boundaries. It’ll be interesting to see what else the author can come up with, and is certainly now on my to-watch list.

The Bookseller starts off pretty well. I liked the ‘alternative’ location (France seems rather absent in American-penned, modern thriller series), and I also really liked the fact that Hugo isn’t your run-of-the-mill stock character. I don’t know a great deal about Embassy Security, so I couldn’t comment on the character’s freedom to operate as he does and whether or not it’s realistic. However, I thought the diplomatic considerations were a good addition. Hugo’s investigation will introduce him to the fact that tensions are rising on the Paris streets as rival drug gangs engage in violent turf wars. Before long, other booksellers start to disappear. Hugo’s convinced there’s something more going on, but he must work against an apparently indifferent French police force, and a few other forces working against him.

The novel did have a couple of weaknesses, I thought. For example, Pryor tries to give Hugo a few more layers as a character by letting us know that he’s been married before (twice – his first wife died in an accident). However, I thought the way the author tried to use this fact was rather clunky and a little cliché. His ex-wife has already moved in with someone else, lives back in the States, and yet Hugo still calls to see if they can work things out. It felt contrived, and Pryor just throws that into the story without really building that into the character’s back-story – it’s as if the mere mention of this is enough to give Hugo more depth. Sadly, this is not the case.

The story moves along at a good pace, with only a few dips in momentum. We slowly get more information about how everything’s connected, how the bouquinistes operate and what’s really going on with them. There are some nice touches throughout (from snippets of dialogue to Pryor’s obvious fondness for France), but there were also some moments when I did wish the story would pick up the pace just a little bit.

It’s a little hard to write too much about the novel without giving away the game. Therefore, I’ll just leave you with some more general thoughts. Pryor shows great promise as a thriller writer, and I do like Marston as a protagonist. The Bookseller exhibits some debut-thriller niggles (a cliché characterisation here, a clunky bit of narrative there), but I have confidence that the author will overcome these as he gets more practiced and experienced writing in the genre.

If you’re looking for a thriller with a bit of a difference, but one that is faithful to the genre’s conventions, then The Bookseller should certainly appeal. It’s a solid debut, and I look forward to reading more by Pryor in the future.