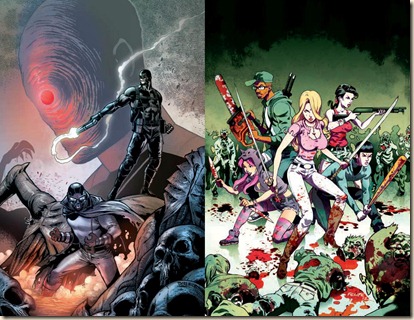 This is just a nice, short catch-up. Boom Studios are still one of my favourite of the smaller comics publishers, and here are two of their best on-going series – they’re very different from each other, but both are also quite fun. 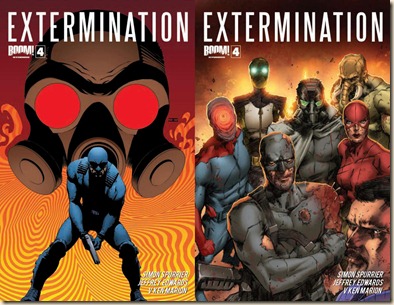 Red Reaper’s and Nox’s partnership has never been on shakier ground. At each other’s throats, will the duo survive the dangerous trek down to New Orleans where a supposed “coalition of capes” has assembled? Or have they been sent on a wild goose chase through EDDA territory by the ramblings of a (deceased) madman?

Extermination continues to be one of my favourite new comic series, and in this fourth issue Spurrier and Co. have really upped the stakes for our unwittingly-teamed-up pair of “heroes”. As usual, we’re introduced to our two protagonists in fine, Spurrier-style:

The story switches between the post-invasion, apocalyptic present and the not-exactly-bright-and-shiny past. Nox, the hero, and Absolute (one of the uber-heroes from the past – the Superman analogue for this reality) really didn’t like each other, you see. Just to make it even more dramatic, the animosity is because of a woman (naturally). In this we see a shade of Ennis’s The Boys – not too much, but there are allusions (in the previous issue) so some similar… side-effects of making love to a super-hero, and in Extermination Absolute clearly doesn’t give a shit about the damage he causes. Anyway, in this issue’s flashbacks, we see Nox getting one up on Absolute post-battle. Their ongoing fight is a seemingly-never-ending game of one-upmanship as their various gadgets and toys negate the other’s advantages so quickly (where have we read stuff like that before…?). As the issue unfolds, we learn of how Nox and Absolute’s conflict is linked to the extermination, and he and Reaper also stumble across some other super-powered survivors. They’re a weird bunch.

This book is filled with comments and snarky asides aimed at the state and tropes of comics, not to mention the various debates that have flourished on the interwebs. Spurrier’s more than happy to poke fun at all sides, making Extermination not only perfect on a moder-super-hero level, but also pretty funny. Alongside the ridiculous technology heroes and villains have to hand, for example, Spurrier will happily wade into the role and depiction of women in comics. Take Harpy, for example, whose description runs thus:

If you’re looking for a super-hero series with tongue firmly lodge in cheek, then Extermination is for you. It’s pretty bad-ass all ’round.

Oh, and there’s an eel called “Warren” in it. 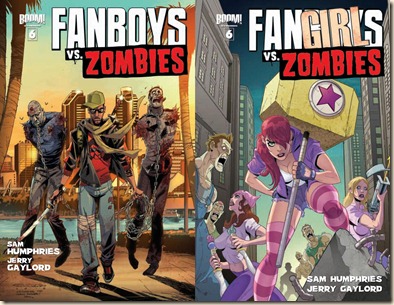 The Wrecking Crew continues wrecking shop in the destroyed wasteland that was once San Diego! Struggling to survive, your favorite fanboys and fangirls ditch the escape plan and forge an attack against the never-ending zombie chaos. Will they divide and conquer, or will they face the same fate as their fallen fandom brothers and sisters?

Like Extermination, this series is filled with good-natured genre satire. This time, it’s zombies (in case you’d not noticed), and Humphries is on fine form in this issue. 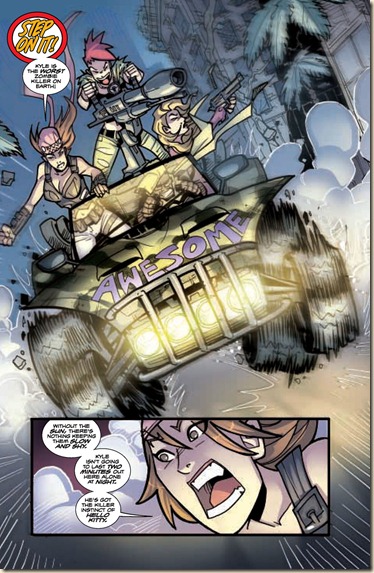 It’s a little difficult to know what else to write about this series, actually. Each issue is pretty fun, there’s some silly humour in it (think early Kevin Smith stuff), a lot of zombie fun framed in geek tropes and general silliness and oft-ineptitude. It’s a great alternative to some of the more po-faced titles published today. I really enjoy it, anyway, and I think most anyone with knowledge modern geekitude will enjoy it as well (that includes, I think, even people who are only familiar with zombie movies and TV, and some of the more mainstream geek media).