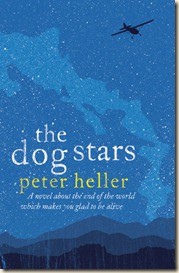 Hig, bereaved and traumatised after global disaster, has three things to live for - his dog Jasper, his aggressive but helpful neighbour, and his Cessna aeroplane. He’s just about surviving, so long as he only takes his beloved plane for short journeys, and saves his remaining fuel.

But, just once, he picks up a message from another pilot, and eventually the temptation to find out who else is still alive becomes irresistible. So he takes his plane over the horizon, knowing that he won't have enough fuel to get back. What follows is scarier and more life-affirming than he could have imagined. And his story, THE DOG STARS, is a book unlike any you have ever read.

I have rather mixed feelings about this book. Parts of it were superb, others not so much. It was bittersweet, heart-wrenching, evocative and engrossing. It was also a little boring, over done and eccentric. I almost gave up on it before the end of part one. But I’m glad I stuck with it. Should you read it? Probably. It’s unlike anything I’ve read before, and yet also highly familiar. It’s rather uneventful for long periods of time, and yet I was hooked.

I’ve read a couple of reviews of this book after finishing it, and I’m not sure what these other readers are talking about. Nor am I entirely convinced that we’ve read the same book. Dog Stars has been described as many things, all of them positive and overflowing with praise. It was heralded as future classic by a writer for The Atlantic. For me, though, I don’t really ‘get’ that. The novel certainly has a very distinctive style, and it’s an interesting one, but it is also one that suggests, when civilisation ends, the first things to go are grammar and proper syntax…

In the wake of a massive flu-like epidemic, the population of America has been devastated (at the very least – there’s not much talk of anywhere or anyone else), and our protagonist, Hig, has been eking out an subsistence living at an abandoned airfield. Hig mentions a particularly aggressive bout of fever he suffered once, but he was one of the lucky ones who pulled through. It’s almost as if the prose still reflect, in some small ways, the delirium of illness. There’s a slight madness about the narrative, the clear impact of situation, loneliness encroaching on how he views the world. Hig is joined by Bangley, his borderline-psycho “friend”, who gets a perverse amount of pleasure from playing soldier and taking out attackers with high-powered rifles. There are a couple of skirmishes, but because the world isn’t that well developed, we don’t fully understand everyone’s motivations.

Hig experiences a particularly heart-wrenching tragedy at the end of part one, which seems to flip a switch in his mind. He decides that he’s had enough of sitting and waiting, and sets out to explore the areas around. He loads up his plane with supplies, and heads out. What he finds is not at all what he was expecting, but does suggest things could start to come around for our lonely protagonist. I won’t spoil what actually happens, but it’s a strange couple-hundred pages. I lost track of time – not in terms of the real world, but it turned out that way more time passed in the story than I thought. The writing’s fine, but given the choppy nature of the prose and narrative, it was a bit of a surprise. Altogether too many pages are devoted to a budding love-story (not that it shouldn’t have been there, just that it was over-done and felt rather padded).

It’s impossible to write or talk about this novel and not mention the author’s prose style. It’s very choppy, stripped of dialogue and much punctuation. This took me a long time to get used to and accept, and even late in the book I was having to go back and re-read short segments because I misunderstood if something was meant to be spoken or just inside Hig’s head. Some authors have managed to use this sort of literary device ably, but I’m not entirely sure that Heller manages to pull it off entirely. I know many people will love this style, and therefore wax lyrical about the whole book. Me? I found it alternately captivating and irritating, so maybe I just have more conservative tastes in prose?

I’m attracted to end-of-the-world novels, for some reason, and I liked Heller’s understated approach to the sub-genre. There are scenes of action, certainly, and he includes many of the tropes of dystopian futures (survivalism, cannibalism, random attacks by rabid bands of crazies, and so forth). But Dog Stars is far more inside one man’s head than most others I’ve read. For this reason, we don’t get a whole lot of world-building, which makes this one of the least fleshed-out dystopian novels I’ve read.

So I wonder what it is this need to tell.

To animate somehow the deathly stillness of the profoundest beauty. Breathe life in the telling.

Counter I guess to Bangley’s modus which is to kill just about everything that moves.

Heller sprinkles a little bit of wry in the novel. There’s not a lot, but there were certainly moments that elicited a chuckle or a smile. Late in the novel, for example, after Hig manages a particularly difficult take off, while transporting two lambs, we get a glimpse of the understated humour the author prefers:

“Even the lambs had caught the mood. They no longer cried, they lifted their heads off the packs... floppy eared and guileless attendants. As far as they knew, all this represented the next stage in the normal life cycle of a sheep.”

There’s something about the prose and lack of proper grammar, punctuation and sometimes syntax: It’s as if Heller wanted to write the story from the perspective of someone who wasn’t lyrical or particularly gifted with writing (despite the character admitting that he wanted to be a writer and poet for most of his life). I understand and appreciate this, but that doesn’t necessarily translate to a gripping novel, and it certainly didn’t in the first third.

That being said, there is something about the novel that keeps you reading. Perhaps we feel Hig’s expectancy, that endless worry that something could be about to happen. But nothing really does happen, until page 104, at which point I almost shed a tear. A lot of the first hundred pages and also certain passages in the final couple hundred pages are, I suppose, technically boring. But it’s an oddly gripping boring.

Heller has a gift for writing solid ambiance and tense atmosphere, and we get Hig’s mood perfectly. Too perfectly, perhaps. I enjoy morose examinations of loneliness, solitude and outsiders (I’m try to write three of them), but this felt aimless for longer than I think it should have. There’s an air of expectancy that makes perfect sense in the story Heller’s written, but one that is too blunt. And yet, despite my issues with it, I couldn’t stop reading. I’m very glad I did continue reading it, too, as the story grows and takes on more life as it progresses. I won’t spoil anything, but there are some new characters that enter Hig’s life, and some potential for hope for the future. I didn’t find the ending as stirring as some other reviewers, but that’s not to say it was a bad conclusion.

There’s a particular part in the novel, the aforementioned tragedy around page 100, that is a perfect few pages to illustrate the strengths and weaknesses of the novel. The writing alternates between heartbreaking and beautifully emotive, to overdone and slightly cheesy. It’s a long, drawn-out, painful ordeal. The emotions are brilliant, visceral and evocative, and it’s very realistic. But it also needed to be reigned in a little bit.

In all honesty, this is a strange book and a difficult one to review. I have no doubt that impression has come through from this rather schizophrenic review. Is Dog Stars good? At times, absolutely. Heller’s prose is alternately gripping and fluid, and melodramatic and over-cooked. The characters are both insightful and shallow, engaging and mundane. I can’t deny that I devoured the book in just a few sittings, and was always happy to pick it up and keep reading, but it is also (in my mind) deeply flawed, and I don’t see the “genius” that a lot of people seem to be seeing. It’s written in a very stylised manner, which will certainly appeal to plenty of people. But, for me, it felt forced (an impression only reinforced by those times when grammar and so forth snap back into their “proper” place). Heller has a gift for ambience, writing solitude and narration, but it’s a gift that is given way too much free-reign in Dog Stars, which led to not a few passages of over-description or scenes that just ran on.

Do I recommend it? Actually, yes, I do. If for no other reason than I want to know what everyone else thinks about it. It’s sufficiently distinctive that it will probably be unlike anything else you’ve read in the sub-genre. There are some fantastic scenes and passages. It’s nowhere near perfect, so don’t expect to love every page.

Posted by Civilian Reader at 1:15 PM