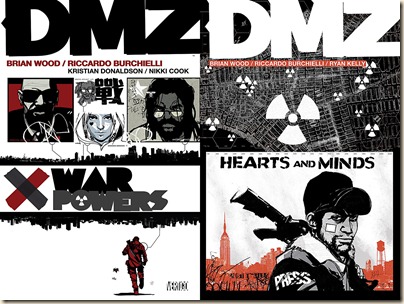 The DMZ sees the first, difficult, tentative steps towards self-government

I’m afraid this was one of my “lost reviews” that got caught in the great Computer Eaten By Virus Debacle of June 2012… Thankfully, I took quite a few notes while reading these two books, and managed to recover those (if not the review I’d already drafted). Needless to say, they continue the story in fine form. So here are some quick thoughts on “War Powers” and “Hearts and Minds”.

The status quo is tossed out the window as embedded war journalist Matty Roth returns from his misadventure in Staten Island to find Parco Delgado in office as provisional governor of New York and details his first 100 days at breakneck speed. Matty’s first task under the Delgado regime? Tracking down the source of one of the DMZ’s greatest urban legends. 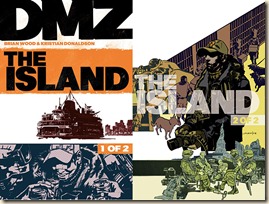 “The Island”: Staten Island, where the leader of the US forces there has come up with a way to start mending fences between the two sides, working way ahead of reality – think Christmas Day, 1914, World War I, only on an island just off the coast of Manhattan. 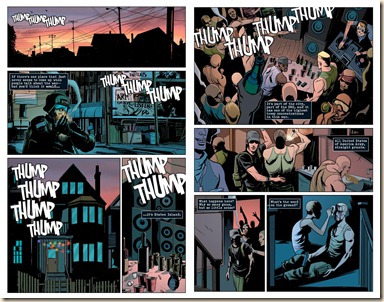 However, everything goes wrong when something goes missing (a chemical weapon) while Roth is visiting. Roth has been instructed, multiple times, that he’s off the record, and therefore isn’t able to report on the hope the situation on Staten Island presents. Nor is he allowed to report on what happens in the wake of the weapon’s theft. The tentative, though fun, peace comes under threat, and some of the men’s worst characteristics come to the fore. So this story is a little like a blend of Christmas 1914 and the Abu Ghraib scandal. Roth’s impression of the forces on Staten Island (both sides, but mainly the US troops), sours quickly and dramatically.

I really like Donaldson’s artwork – it’s cleaner than Burchielli’s, but not necessary more true-to-life. It’s nice to see him working on more issues of DMZ.

“War Powers”: In this story, we learn that Wilson, the Triad lord of Chinatown, is sitting on a ton of gold, which the DMZ’s newly elected leader Parco wants. Matty’s job, as Wilson’s friend, is to go get it. Parco has a Plan B, and when that gets screwed up, Matty convinces Wilson to give him some of the gold. They get ambushed on the way back, and Matty learns of other deals Parco’s been making. This is a pretty good story, which shows how even politicians with the best intentions can manipulate their followers – something new that ruins Roth’s image of what he’s been trying to accomplish on Manhattan.

We see echoes of what happened in the movie Green Zone, as well as the area in Baghdad with the same name, including the actions and policies of the Provisional Authority. 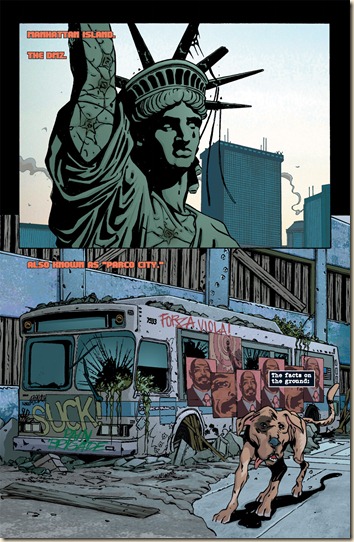 The shine has most certainly come off since politics and power has come into play. Matty’s been away for a while, and upon his return, he realises just how much things have changed and how out of the loop he has become. After an uncomfortable conversation with an old acquaintance, he decides to take things into his own hands, grows a pair, and the story sets things up for a potentially very interesting future (though I have no doubt it’ll be interesting regardless of what Wood & Co. come up with). 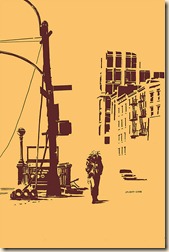 “Zee, DMZ”: In this final chapter, we get another great short story, focusing on Zee, Matty’s former girlfriend. At the start of War Powers, we saw her leave Parco City, and then vanish. Here, we catch up with her and learn what’s been going on – for real and also inside her head, as she puzzles out the new reality of the DMZ and tries to figure out what she wants to be in it. I won’t go any more into the story, as that would just spoil pretty much everything, but needless to say, it’s a great story that offers some great commentary on a number of war-time issues.

Overall, this is another superb book. I never get tired of saying how much I love this series. Don’t much care if you’re tired of reading me say so. Just go read it!

Matty Roth redefines his role in the DMZ, rolling with a private security force and self-defined mandate to heal the city. But is this the start of a brand-new day – or will this "Rise of Matty" end with the fall of just another petty warlord?

I thought I’d start this review with a snippet from the Intro, written by Morgan Spurlock. It’s a perfect summation and explanation of the series as a whole:

“Rogue nations, outspoken dictators, private contractors and heartless mercenaries all find a place in the pages of DMZ. They open our eyes and our ears to events that, while fictional in the frames of this groundbreaking creation, are links in the chains of our global existence. Each story, each character and each page is undeniably tied to the world in which we live, and for me ­ that is DMZ's greatest triumph.” 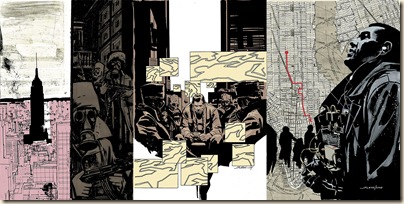 “No Future”: This is a particularly dark diversion from Matty Roth’s story, and one that manages to pack a hell of an emotional wallop. First responders, former cops and firefighters have formed a weird “cult”, enforcing the law as they see fit in the DMZ. This story follows one of the members, who is very clearly suffering from strong PTSD. What makes this story even more complex is that Wood has incorporated into the group a leader that manipulates its members in the same way that suicide-bomber-cults do (allegedly – I’m just commenting on many reports I’ve read and seen). 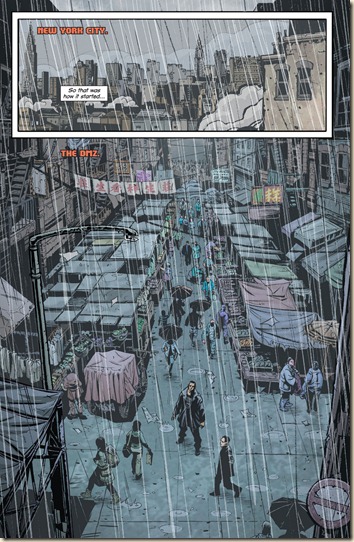 The story links up with early events (for example, Matty’s chopper being shot down in volume one, that sort of thing), and is a pretty powerful story. It ends tragically. The artwork is fantastic throughout, and complements the story perfectly. A great ambience.

“Hearts & Minds”: This is a difficult story for Matty. His new role in Parco’s government, and the autonomy it brings, has changed him. He’s spiraling out of control, and things do not work out well for him. I won’t spoil any more than that – it’s a great story-arc, which adds another layer to Matty’s already well-developed character, taking him into a darker, more violent space. It really does amaze me how Wood and Co. have been able to keep this series feeling so fresh for so long. I therefore can’t recommend this series enough. (Again.) 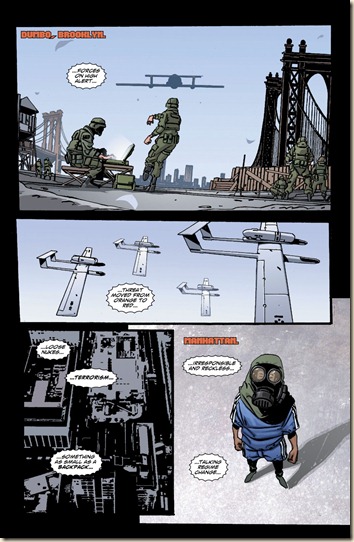 I’m currently reading the ninth book in the series, M.I.A., and will review that along with book 10, Collective Punishment, in the next week or so.