Coming up in 2013 from Solaris Books

The other day, Solaris released a handful of new cover images on their blog. Being the book magpie that I am, I decided to share them again over here, with any other information on the books I could find.

So, without further ado, here are the covers for Gaie Sebold’s Dangerous Gifts, James Lovegrove’s Age of Voodoo, and Guy Adams’s The Good, The Bad, and the Infernal. 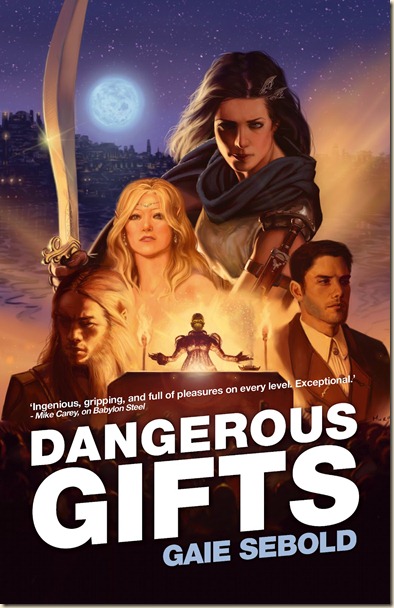 Babylon Steel, former avatar of the goddess of sex and war, currently owner of the Scarlet Lantern, the best brothel on Scalentine, city of portals, has been offered a job; as bodyguard to Enthemmerlee, the latest candidate for the Council of Incandress; and as spy for the Diplomatic Section, the barely-acknowledged government of Scalentine.

She doesn’t want it. Incandress is on the verge of civil war. Enthemmerlee represents the hopes or fears of a large portion of its population and is a prime target for assassination. And on Scalentine racial tensions and economic stresses are boiling up, with Babylon’s lover, Chief Bitternut, trying to keep the lid on.

But circumstances conspire to send her to Incandress. There, what with attempting to turn Enthemmerlee’s useless household guard into a disciplined fighting force, dodging the Moral Statutes, the unwilling presence of a very annoyed member of the Diplomatic Section and the need to keep both herself and her client alive, things become rather too interesting. And that’s before Babylon realises that the situation is far worse than she thought, and is driven to a choice that will have far-reaching consequences…

I really enjoyed the first in this series, Babylon Steel – it was a great mélange of sci-fi and fantasy, a strong heroine, and a pretty great story. I’m definitely looking forward to reading more about Steel’s (mis)adventures.

Age of Voodoo by James Lovegrove 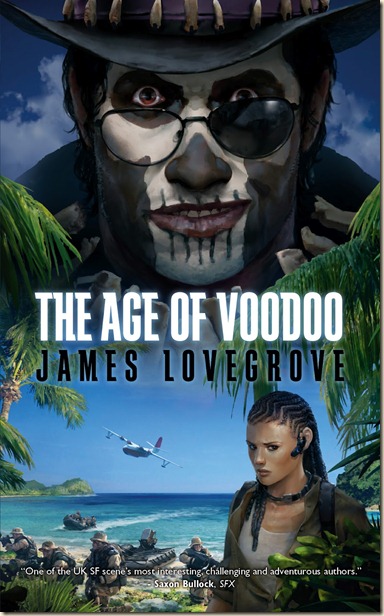 Lex Dove thought he was done with the killing game. A retired British wetwork specialist, he’s living the quiet life in the Caribbean, minding his own business.

Then a call comes. One last mission: to lead an American black ops team into a disused Cold War bunker on a remote island. The money’s good, which means the risks are high.

How high, Dove doesn’t discover until he and his team are a hundred feet below ground, facing the fruits of an experiment in science and voodoo witchcraft gone wrong. As if barely human monsters weren’t bad enough, a clock is ticking. Deep in the bowels of the earth, a god is waiting. And his anger, if roused, will be fearsome indeed.

This is a series I really must get around to reading properly (thus far, I’ve only managed to read Age of Anansi, a short-story). It’s a fantastic premise for the series as a whole, and each of the novels has, likewise, seemed right in my bailiwick. But, for some reason, I just never get around to it. I’ll try to do better.

In related Pantheon news, Lovegrove recently wrote the following on his website:

“I have agreed with Solaris to write two more Pantheon ebook novellas to accompany Age Of Anansi. The first of these, Age Of Satan, should be out in the spring of next year, while the second, which I haven’t even got a title for yet, is due out in the summer. Then, come autumn, all three will be gathered together and published in a physical-book omnibus edition, which I’m pre-e-etty sure we’re going to be calling Age Of Godpunk.”

The Good, The Bad, and the Infernal by Guy Adams 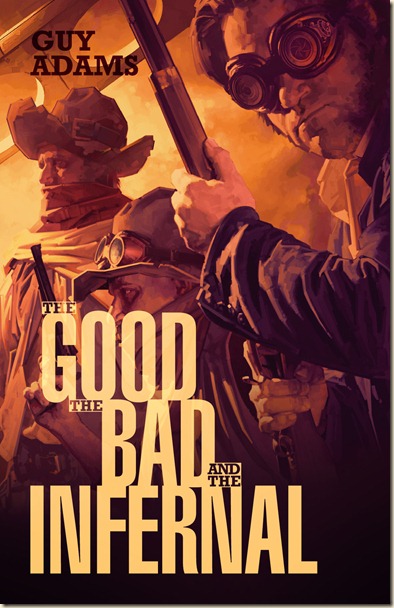 “You wish to meet your God?” the gunslinger asked, cocking his revolver, “well now... that’s easy to arrange.”

Every one hundred years a town appears. From a small village in the peaks of Tibet to a gathering of mud huts in the jungles of South American, it can take many forms. It exists for twenty-four hours then vanishes once more, but for that single day it contains the greatest miracle a man could imagine: a doorway to Heaven.

It is due to appear on the 21st September 1889 as a ghost town in the American Midwest. When it does there are many who hope to be there: traveling preacher Obeisance Hicks and his simple messiah, a brain-damaged Civil War veteran; Henry and Harmonium Jones and their freak show pack of outlaws; the Brothers of Ruth and their sponsor Lord Forset (inventor of the Forset Thunderpack and other incendiary modes of personal transport); finally, an aging gunslinger who lost his wings at the very beginning of creation and wants nothing more than to settle old scores.

A weird western, a gun-toting, cigarillo-chewing fantasy built from hangman’s rope and spent bullets. The West has never been wilder.

This sounds pretty cool. Think it will appeal to fans of Mike Resnick’s Weird West series, too.