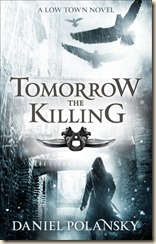 In Tomorrow the Killing, Polansky shows us he is no one-book wonder. This sequel to the excellent Straight Razor Cure/Low Town adds yet more layers and colour to this world. Everything about this book builds on what has come before, and is better in almost every way. If you haven’t read Polansky yet, you must remedy this ASAP. He writes gripping, addictive stories with a grim eloquence.

Something strange is going on in Warden’s city. What starts out as a simple missing-person’s case, which he takes on as a favour for an old general, quickly morphs into a much bigger problem. The veterans’ Association seems to be making some trouble, acting out a little, and has drawn the attention of Black House and other powers in the city of Rigun. Their leader, Pretories, is apparently upsetting the delicate balance of politics, society and graft in Low Town and the city at large. As Warden investigates, he forms and executes an audacious plan to clear his own conscience of past wrongs and maintain his position in Low Town. However, as time passes, he also starts to realise he may not be the one pulling the strings in Low Town.

Warden is easily one of my favourite fictional characters, and I love his approach to everyone. Not that I necessary admire everything he does, but the way Polansky has constructed and written him is brilliant. Warden is obnoxious, arrogant, at times brutal, but he also maintains an honourable code that allows readers to approve and empathise with him as well. In Tomorrow the Killing, we learn more of our protagonist’s background and experiences in the war with the Dren. Through these flash-backs (which are, unlike many other authors’, seamlessly woven into the narrative), we learn more of how Warden’s worldview and character have been shaped by a pretty dark, brutal past.

He has a wonderful, insouciant approach to his ‘betters’:

“A bell rang from within the room, so I never did get to find out whether I had done enough to rile him. But I wouldn’t have bet against myself – I can be an aggravating motherfucker when I set my mind to it.”

"There were five rows of men with too much wit to take our place in the vanguard, and they fell in behind us, pikes straight in the air. Scuttling in lock step across the battlefield, our ungainly hedgehog joined a hundred odd others stretching out along either side of us, surely as curious a migration of bipeds as ever graced the surface of the Thirteen Lands." (24)

As well as more of his background, readers will also get more evidence of his reputation and position in Low Town (something I thought was slightly absent in Straight Razor Cure). He’s ruthless, Machiavellian, oft-times unpleasant to others (who, to be fair, are usually even less pleasant – not to mention wonderfully drawn – characters), and it is made far more clear just how much of a force he is in Rigun’s criminal underworld.

As can now be expected from Polansky, the novel contains a good deal of shrewd and cutting social commentary. As well as some rather great moments in which Warden deconstructs the aristocracy (below), he also spends a good deal of the novel commenting on society’s tendency to romanticise war and its ‘heroes’. There’s less commentary on the aristocracy in book two, but Polansky still manages to get in a couple of jabs:

“Foremost what is hateful about the aristocracy is their fundamental meaninglessness – they do nothing and thus are nothing. On some dim level they seem to be aware of it, hence their refuge in petty intrigues and expensive narcotics, in nightly soirees and the occasional bloody duel. There’s a frantic quality to their play, more distraction than recreation. If things ever stopped spinning long enough for them to take a look at themselves, half would end up taking a midnight dip in the bay.”

The novel is littered with quotable moments, so it’s been really difficult to keep quotations to a minimum. But Polansky has written so many that perfectly capture the mindset of our protagonist or situations. Warden, for example, is as chipper and cynical as before. “Things will get worse before they get better,” he’s told at one point. “People say that – but in my experience things usually just get worse.”

There’s no denying that Low Town is a grim and dark place. Some may wonder if they really need another “grimdark” fantasy. On the strength of Polansky’s characters, story and prose, I would say absolutely yes. The atmosphere is improved by the inclusion of a particularly black sense of humour, which Polansky deploys expertly to avoid taking us too far into the grim side.

“I had memorized the directions Yancey had given me before coming – nothing says ‘mug me’ like standing around a street corner staring at a set of notes.”

Tomorrow the Killing introduces us to some great new characters – for example, Eloway the “executive” of the most extensive snitch network in Rigun; Mazzie of the Stained Bone, rogue practitioner of the Art; and the various members of the Association, including some of Warden and Adolphus’s former comrades from the war.

Thanks to Polansky’s fluid and eloquent prose, I dropped right back into the world, and I became hooked once again from page one.