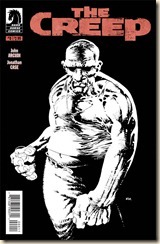 A young boy puts a gun in his mouth and pulls the trigger. The police don’t care. Not about his death or the death of his best friend two months earlier. The dead boy’s mom seeks help from an old flame that’s employed as a detective. What she doesn’t know is that he suffers from acromegaly – a physical deformity resulting in brutish facial features at mid-life. Will his freakish appearance get in the way of solving the case?

This is a pretty interesting start to a series. Not a lot of progress is actually made, but Oxel takes the job, and starts to investigate what’s happened to the boy. Is it connected to another suicide? What’s actually going on with the families?

The artwork is quite different, with a sketch-like, unfinished quality about it. It works very well for the story. Not really sure what else to write about this issue, though. I look forward to the next installment. 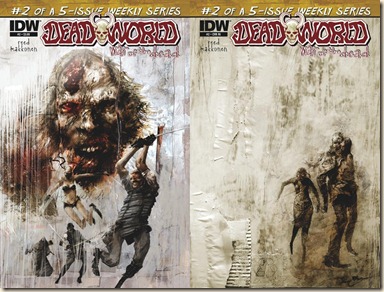 The Lepers, with their dead and decaying flesh, brace themselves for the zombie onslaught. Rand, the leader, pushes for a confrontation soon as he knows the lepers are the only hope, and most of them are closer to death than they’d like to admit… meanwhile, King Zombie reveals his sinister plan!

This is a really dark zombie story. I really like it, too. Bit difficult to review, given that each issue’s coming out on a weekly-basis. I may save up the remaining three for the last week, get a bit more of the story. In this installment, we learn a little more of what’s going on, the various factions and their motivations. There are some surprises, and a lot of good writing, as the various forces start to execute their plans. If you’re after some zombie gribbliness, then this series should meet your needs. I think this is going to build up to a pretty cool, climactic ending. 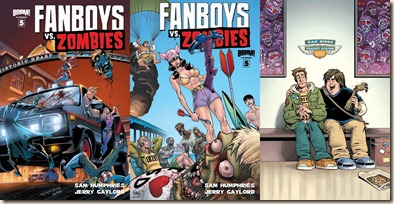 Brand New Story Arc! Perfect Jumping-On Point For New Readers! Comic-Con is over. San Diego is completely dead… err, better make that undead. Escaping the convention center was the easy part — now, the Wrecking Crew has nowhere to hide as they fight their way through the ravenous zombie hordes that have spread all across the West Coast.

This is a weird issue. Not a bad one, just a little weird. I didn’t catch issue four, but this is set one month later. The members of the Wrecking Crew are living in a self-styled “Fort Awesome”, a base of operations while they look for two missing members, Rob and Burger. 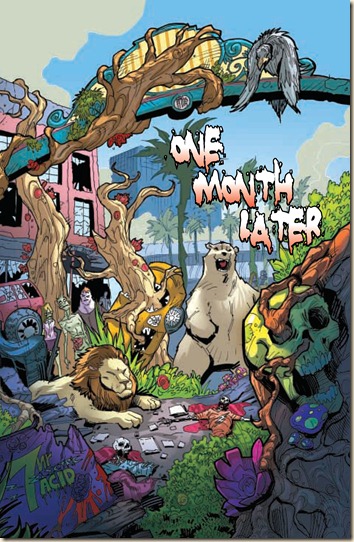 They have also acquired a couple of new members, including Brendan (who doesn’t like his chances as the only black dude in a horror story) and Missy (who never got the memo that the cosplay competition was cancelled). They’re getting comfortable, which means they should get moving. No one’s come to rescue them, and except for their small band of zombie-killing survivors, nobody else is alive in San Diego. Some of them are going a little crazy, a little Apocalypse Now. 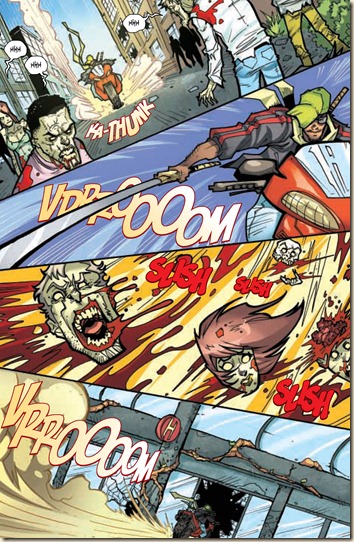 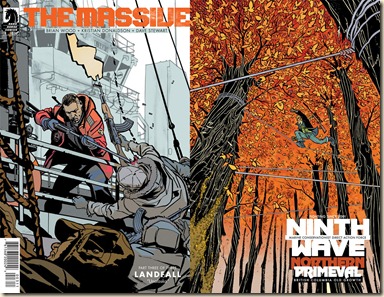 In a remote village in the Aleutian Islands, the crew of the Kapital, on the run from Siberian pirates, reconsiders their core mission as pacifists and conservationists. In this unpredictable and often violent world, should they be more? Narratives and story lines converge as the past catches up with the present, and in quiet, unassuming Unalaska, USA, a new mission is forged.

As the Kapital is attacked by Russian pirates, we’re introduced to another of the crew – this time, Mag, the former Tamil Tiger. The man welcomed into the crew as someone who knows how to get things done. 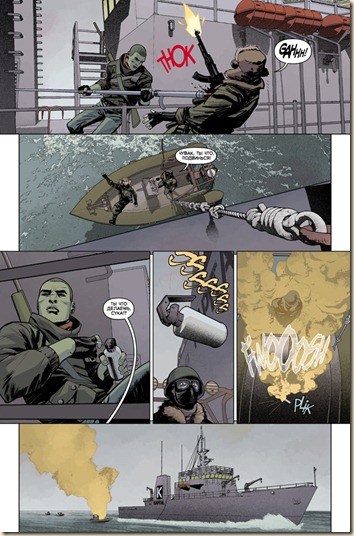 The rest of the issue is about the crew framing their approach to the new world and situation, trying to figure out how to deal with this new, more dangerous world. Mag is erring on the side of being armed, while Callum (the captain of the Kapital) is vehemently opposed to arming crew-members and wants to adhere to Ninth Wave’s nonviolence pact.

This issue was, on the whole, a bit of a place-holder. It has a slow-pace, despite the pirate action at the start, and much of it, I thought, was rather ambiguous. It’s the end of Part One, but instead of any sort of conclusion, we’re left with plenty of unanswered questions (including, unfortunately, “What’s this all about?”).

I am not sure where this is going to go in the future. There’s plenty of mystery and so many tantalising hints, I will definitely keep reading. I’m intrigued to know what Wood has up his sleeves. 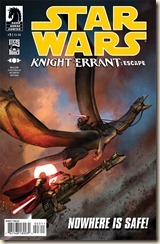 The location of a powerful Sith relic is closer to being uncovered, and so is the fate of Jedi Kerra Holt’s lost family! Kerra’s knowledge has gotten a Sith reconnaissance team closer to the relic than would have been possible without her—but will her desire to find what happened to her family also bring more destruction to Sith territories? How long can she stay undercover and keep one step ahead of the team and their merciless leader?

The issue kicks off with a brief couple of pages of background on Lord Odion’s childhood, and his particular, miserable connection to the Dark Side of the Force. The story then switches back to the ‘present’, and Kerra/Mercy’s attempts to get to Skarpos (complete with her bizarre tendency to exposit out loud…). Our heroine and her team are stuck on a moon-base on the way to Skarpos, waiting for re-supply, but it’s one of Lord Odion’s domains, which introduces us to a particularly cruel and horrific practice of his, involving the children of his empire. It’s one of the darkest things I’ve seen in any Star Wars fiction, so well done Miller for doing something new and disturbing. 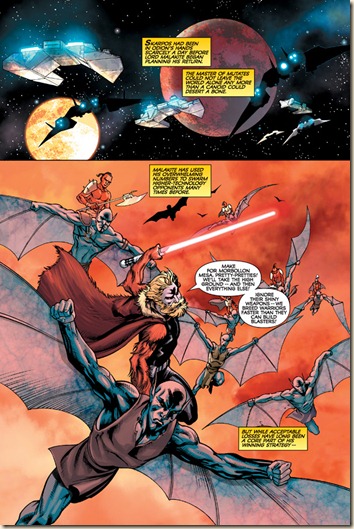 For the main, this is a pretty good, if standard Star Wars comic. There are niggles with the script, but they’re forgivable. As per usual, it also ends on a pretty good cliff-hanger, so my interest in the next issue has certainly been piqued. Miller’s done a great job of adding more to the Star Wars universe, our understanding of the Sith and various ways in which they differ from the Jedi and each other.

If you’re a fan of the Star Wars universe, then you should find plenty to like here, but I am still looking for that comic that lives up to the first three movies. So far, only Dark Empire and the Crimson Empire books have managed that. 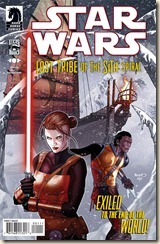 On a planet ruled by a tribe of Sith – marooned thousands of years ago and cut off from the galaxy – the throne holder is about to be challenged by a power-hungry Sith rebel from the slums... and a thwarted royal Sith princess! Their few shared interests set them on a quest together – but most certainly not as partners!

The saga of the lost tribe continues.

This is an interesting new chapter in the story of the Lost Tribe – which first started in Miller’s short stories, which in turn tied into the Fate of the Jedi nine-novel-arc (which only recently finished). I like how the world’s been realised – quite different to how I imagined it, but well-done nevertheless. 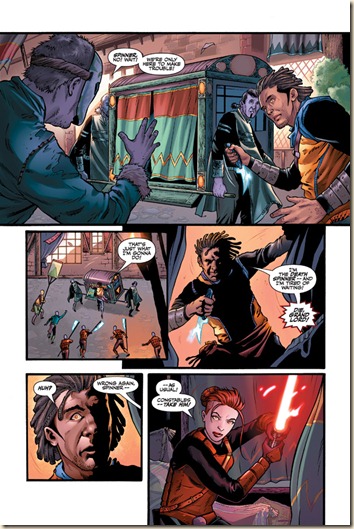 As a first issue, this comics spends most of the time setting the scene for the five-issue arc, as well as providing enough info for new readers and those familiar with the short stories. However, it does err on the side of readers having no prior knowledge of the setting and characters, so it did feel a little exposition-heavy in the first half.

The issue’s put together with very good artwork, and the team have created an interesting interpretation of the Lost Tribe’s world. It’s a lot more faux-medieval Europe, mixed with sci-fi elements than I’d originally imagined. 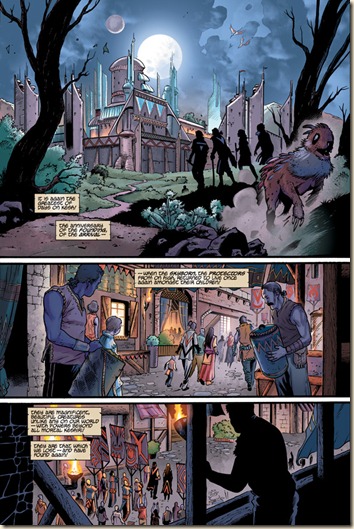 Recommended for fans of the short stories and Star Wars fiction in general, although I don’t think it’s an essential title. 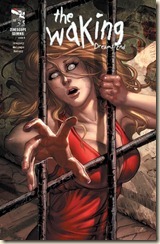 The hit series that redefines the zombie genre continues... After her partner's shocking death, Vanessa must continue the search for the the mysterious serial killer. But when the trail begins to heat up with clues leading to a possible suspect, Vanessa will quickly find that she may have bitten off more than she can chew.

I’m enjoying this series quite a lot – it’s creepy, but not in  a camp way. A serial killer is terrorising the otherwise murder-free city, and Vanessa and her partner have finally discovered his existence, if not his identity. They have also, sadly, discovered his handiwork. Very little was left in one piece, but thanks to the Waking the… parts are not entirely restful. 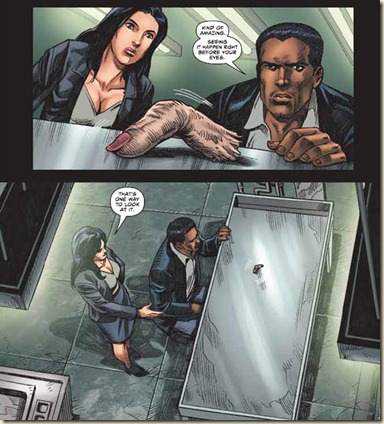 This is an interesting issue. We get to know Vanessa and her partner a little better (in a couple of dialogue-heavy pages), as well as one of the most original interpretations of pointing the finger at the killer… (Just read it, and you’ll see what I mean.) There’s a little telegraphing, and a rather unnecessary death, but on the whole this continues to be an entertaining horror-lite comic book. The story builds nicely to a cliff-hanger set up for the final part next month.