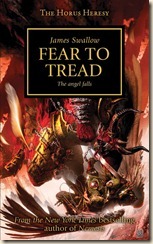 The Blood Angels, at long last…

Since the earliest days of the Great Crusade, Sanguinius – angelic primarch of the IXth Legion – was ever among the closest and most loyal of Horus’s brothers. But the Blood Angels have long kept their true nature hidden from the rest of the Imperium, and when the Warmaster hints that the key to their salvation may lie in the ruins of a conquered world, the sons of Sanguinius race to claim it. Now, as the revelation of their betrayal dawns and the traitors’ hand is revealed, the Blood Angels must face all the warp-spawned armies of Chaos, as well their own personal daemons, upon the blasted plains of Signus Prime...

This novel has been highly anticipated by a great many WH40k and Horus Heresy fans. The Blood Angels, one of the most popular loyalist Astartes Legion, finally get some of their story told. And Swallow nails it. This is an epic sci-fi tale of honour, nobility, betrayal and a deadly, hidden flaw…

Despite its length, I find it a little tricky to write about the novel in any great detail – not because there’s nothing to say about it, but because I really don’t want to spoil anything. The story is epic, intense, emotional and quite gripping. Swallow focuses on the Legion-wide picture, rather than too much on the individuals involved – this was, perhaps, my only complaint with the novel, that more effort wasn’t spent on character development of the handful of individual Blood Angels who act as the readers’ guides to events. In fact, I think Swallow could have added more to the novel in order to do this, without ruining its flow or overall impact.

The novel starts off with an introduction set on the planet Melchior. This chapter does a fantastic job of introducing readers to some key aspects of the story – Sanguinius’s close relationship with Horus, as well as the dark secret at the heart of the Blood Angels’ gene-code, the Red Thirst, and just how close the Legion came to being on the side of the Traitors. Fans of the game will be familiar with the Red Thirst, but for people who read the novels but do not play the game, this should locate you very quickly into who the Blood Angels are, and what they face. We’re quickly given everything we need to understand a lot about the Blood Angels, their ways, and their style of combat.

Swallow adds some really nice Chaotic flourishes and beasties – some are familiar (daemonettes, the Bloodthirster on the cover, and more), while others are new, original, and pretty horrific creations that force the Blood Angels to question everything they know of the universe and the Emperor’s insistence that there are no such things as daemons.

Faced with the gibbering, nightmarish denizens of the warp, the Blood Angels are presented with a real conflict: what of their psykers? The novel is set post-Nikaea, which saw the Emperor’s edict that banned all use of psychic powers by members of the Astartes – with hindsight, an insane over-reaction to Thousand Sons’ Primarch Magnus the Red’s experiments and use of warp energies. We see how the Emperor’s decision has effectively disarmed the Astartes against their new, greatest enemy, whose primary weapon is psychic in nature. As the truth of Signus Prime is revealed, the former Librarius troops must decide on whether or not they are going to break the Edict in service and defence of their Legion and Primarch.

The novel has an overall more sinister tone, which I certainly welcomed. It’s less about all-out warfare (although, of course, the second half is still pretty brutal and bloody), and has a lot more strangeness and existential horror and threat. We are given more information about Sanguinius and Horus at a couple of points in the novel, seeing just how far Horus has descended into madness and hate, and how far along the path of Chaos he has travelled already. It was a little tricky to situate the novel in the Heresy timeline at first, but things quickly clear up.

This is a great addition to the Horus Heresy series, and finally gives fans what they’ve been wanting: some background on the Blood Angels’ role and actions in the early days of the Heresy. They are, along with the Space Wolves, one of the most interesting and idiosyncratic of the loyalist Legions, and their absence from the series up until now has been a real oversight.

Fear to Tread packs quite a wallop, despite the lesser focus on character development that we’ve come to expect from the Heresy line of novels and short stories. I would, however, still definitely recommend it to all fans of the series. It steps things up nicely, and is still a satisfying read.