This is just a very quick post to share this new piece of cover art. This time, it’s for Cassandra Rose Clarke’s second novel, The Mad Scientist’s Daughter: 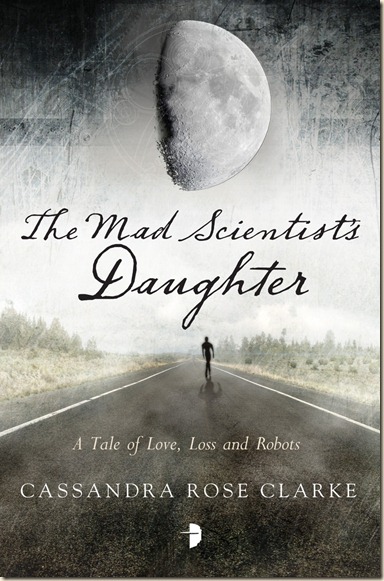 The novel will be published by Angry Robot Books in February 2013. Here’s the synopsis:

There’s never been anyone – or anything – quite like Finn.

He looks, and acts human, though he has no desire to be. He was programmed to assist his owners, and performs his duties to perfection. A billion-dollar construct, his primary task is to tutor Cat.

When the government grants rights to the ever-increasing robot population, however, Finn struggles to find his place in the world.

The Mad Scientist’s Daughter will follow hotly on the heels of Clarke’s first novel, The Assassin’s Curse, which will be published in October 2012 by Strange Chemistry (Angry Robot’s YA imprint).

Readers may remember that The Assassin’s Curse was the subject of an earlier cover art post. Clarke is certainly having great luck with book jackets.