Here we have my slightly delayed reviews for last week’s New 52 titles (I was away, and didn’t take the comics with me). This week, the titles are all Batman-related: Batman, Birds of Prey, Catwoman, Nightwing and Red Hood & The Outlaws.

[Reviews of the first and second issues here and here, and Catwoman here.]

There was also the latest issue of Justice League, but as I’ll be reading all three issues at the same time, I’m saving it for a separate post (which will also include a review of all three Superman issues – the latest of which came out November 23rd – and also Swamp Thing and Teen Titans). 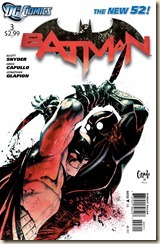 As Bruce digs deeper into the mystery of the recent owl murders, he soon finds himself face to face with a shocking enemy – an enemy the Wayne family has secretly been at war with for centuries. Be there for the first shots of the war for the soul of Gotham City. Friends will become deadly enemies and secrets will be revealed – revelations that will change the Bat-family forever.

This issue offers a lot of background, as Batman investigates the Owl Court. It taps into our fascination with secret societies and superstitions, and adds a great thriller and mystery element to the overall story. I’m really enjoying this storyline, and while this issue was less action-packed than some others, it was still entertaining and interesting. Barring the underground brawl at the start (which is ended by ingenious usage of a magnet), there’s basically no action in here at all. Can’t wait to see where this goes in the future – especially since Snyder has said (through twitter) that things really start to kick off in the next few issues. Definitely a keeper. 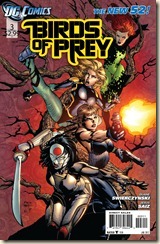 Someone’s come up with a way to turn ordinary citizens of Gotham City into undetectable walking bombs…and only Black Canary (a.k.a. Dinah Laurel Lance), Starling (a.k.a. Ev Crawford) and new team member Katana (a.k.a. Tatsu Yamashiro) can stop them. But will Canary’s choice of a fourth team member, a notorious bioterrorist, tear them apart first?

This title had been on probation, as I found the previous issue was a little too slow and didn’t grab me. This issue is better, as another member is added to the team: Poison Ivy. I really liked the way Ivy’s been written, and her dynamic with the other Birds. I like Starling in particular, as she’s seems to have a bit more moxie than the other two (Canary and Katana) – at one point, she refers to Poison Ivy as “the talking salad”. That being said, I’m still not entirely sure where this will be going. The storyline is very teasing, which is OK to a point. But now I’m just wishing there was a little more going on. The next issue looks like it may see another recruitment for the team, before we really start getting into the meat of the story. I think I’m going to wait until the collected edition, now. 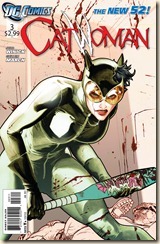 Cats hate baths. Cats hate dogs. And cats hate being caught. Catwoman stole from the wrong man, and now he’s got her. He wants his stuff back, he wants answers and he wants blood. Cats had better have nine lives, because Selina Kyle is about to lose one!

So. Catwoman’s getting even more crazy with each new the issue. At the end of the previous issue, Bone (a mid-level gangster freak) caught up with her. As she came face-to-face with Bone’s revenge, Catwoman’s already-delicate psyche crumbled a little bit more. Now, it’s her turn to exact some Gotham-style revenge. Want a hint? Take a look at that cover…

This is an interesting title. It’s intense and brutal, not to mention very graphic. Winick has focused a lot on Selina’s mental state, by clearly showing how fractured she is on the inside, and how erratic her moods can be. There’s a lot going on, and when coupled with March’s excellent art – which is often very close-up and intimate – it forms a very satisfying title to read. I’m not sure where it’ll be going next, but I’m certainly interested to find out. 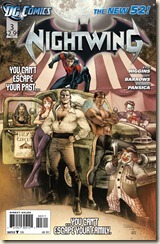 The Big Top comes to the Windy City! After the massive events of issue 2, the circus heads to Chicago – and Dick Grayson is along for the ride! But as Nightwing puts pressure on ex-Haley connections in search for answers about his past, one lead may be far too explosive to handle! Be here as Nightwing takes his quest for the truth to the Second City!

In this issue we learn some more about Dick’s past with the Circus, as well as a little more about his relationships with those he knew from his performing years. Some of his colleagues have stayed, while a couple of others have moved on to other, darker employment. On the whole, I’m really enjoying this title – Nightwing’s a new character for me, and I really like the story Higgins has written. As Nightwing looks into the death of the former owner of the Circus, we learn a little more about the tensions within the Circus community.

There’s one confrontation with a former friend that seemed a little odd and contrived (it involves contract killers), but it was very well visualised and I think the team managed to pull it off well enough that I quickly moved on and just enjoyed the ride. Definitely a title I’ll keep following, this has been one of the surprises of the reboot. 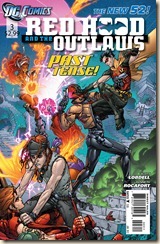 Red Hood, Arsenal and Starfire enter the Chamber of All to discover what the Untitled wanted – but they’ll need to leave their most cherished memories as collateral. And when you’re a reincarnated sidekick who lets your madon get the better of you, a former addict turned soldier of fortune, and an intergalactic princess who never quite recovered from a childhood spent as a prisoner of war…? Well, there aren’t a lot of cherished memories to choose from! All this as the trio draws ever closer to dealing with a threat that’s already killed the ancient caste of assassins who taught Jason Todd everything he knows about the art of killing!

This title is probably the one I’ve been most pleasantly surprised by. When reviews of the New 52 first started to appear, Red Hood & the Outlaws didn’t fare too well. Many people complained about the portrayal of Starfire in particular. For me, however, I was drawn to this motley group of reprobates: nobody wants them, they are all running from their pasts, and they’re all looking for a purpose.

This issue was a bit of a place-holder, but one that allowed for some reminiscing. We get just a glimpse of our three heroes’ backgrounds, and understand just a little bit more about what motivates them. We see this through the memories that are held as collateral; where Starfire and Arsenal’s memories were informative, Red Hood’s was also surprisingly touching.

The artwork is interesting. Rocafort and Blond have a very cool style – it is half sketch, half complete. Usually, I prefer a more clean style – perhaps a hold-over from my familiarity with 1990s X-Men, Spiderman and G.I. Joe comics. The page four and five spread was amazing, though – imagine MC Esher on the good drugs, and you’re more or less there.

I really enjoy this title.

One observation from reading these five comics is that it is possible to pack in an awful lot of story into a relatively short amount of space. All – except perhaps Birds of Prey – felt a lot longer than they actually were. They were all very satisfying, and I certainly felt like I was getting value for money.

I’ll be reading and reviewing some of this week’s latest comic releases very soon: All-Star Western, Aquaman, Diablo, I Vampire and Justice League Dark. The following week, I’m not sure that there’s much that has caught my attention, so I’ll probably post a review of a collected graphic novel – either Red Hood: The Lost Days, or I’ll get to the Batwoman New 52 issues and Elegy. I’ll see what mood I’m in when I get to choosing, and we’ll go from there.