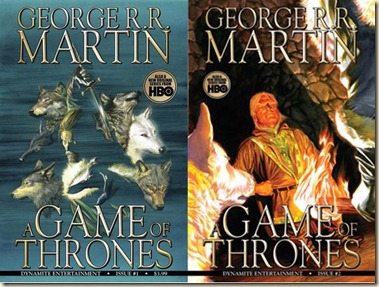 The comic adaptation of the fantasy classic

The premiere issue introduces readers to George’s world, adapting the prologue and first three chapters of the novel, and bringing onto the graphic stage such iconic characters as Eddard and Catelyn Stark, Jon Snow, young Bran Stark, and Daenerys Targaryen.

In the second volume of A Game of Thrones, the irresistible plot thickens and the spellbinding magic of a master storyteller deepens.
For Eddard Stark, Lord of Winterfell and Warden of the North, a new role now beckons: Hand of the King – a position of power second only to his majesty himself. But is a life at court, in luxurious King’s Landing, any life for a hardened man of action like Stark? Is the king’s invitation an honor he can refuse – or a mandate he cannot ignore, when faced with shocking revelations of treachery on high?

Martin’s fantasy classic adapted for the comic medium by Dan Abraham, one of my favourite authors? Yeah, there was no way I was going to pass this one up. Despite still never having read the novel (but seeing and loving the HBO series), I thought these two issues were really well put together, and offered more for readers still not sure about diving into the novels. The artwork throughout the two issues is very strong and eye-catching, which makes me wonder at the couple of reviews I’ve seen that described it as “bland”.

A common complaint with me when it comes to comics, each issue on its own just doesn’t hold enough story. True, Abraham has managed to cram a lot into each story, and he does a great job of adding more detail than the HBO series – despite the two issues ending before Jon Snow takes the black, I feel like I know far more about the intrigue, politics, characters and history of the world than I did at the same point in the TV show.

Abraham manages to give us the story expertly, and never succumbs to overt exposition or info-dumps. The dialogue and narrative are natural and read very well over both of these issues. We get a better sense of the relationships between the characters thus-far introduced and focussed on (particularly the Starks and King Robert). Also, unlike the HBO series, Abraham has been more restrained with the sex – there’s nothing gratuitous about the one love-scene (in issue two). It’ll be interesting to see how Dany and Khal Drogo’s wedding night is handled in the next issue. (I remember reading an interview Abraham did a while ago, in which he discussed the sensitivity of the scene, but I can’t find the link any more – anyone know where it was?)

Because of the sheer scale of the novel(s), I wonder how this is going to work in the long run (there will be 24 issues, each at about 29 pages). Yes, each issue is packed with story, and they are certainly more satisfying on a story-basis than most single comic issues, but there will, surely, by necessity still be a few issues in the middle during which not a whole lot happens. Given the month wait between issues, I imagine this could be frustrating for some people, who may think the two-year wait to get the whole story is just too long and not worth the effort. 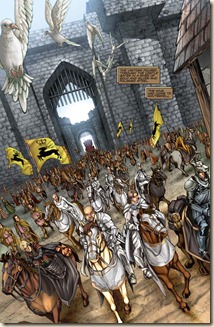 I’m certainly eager to read more. True, the novels are available, so anyone who really can’t wait can just pick those up, but there is something about these comics that needs to be read. It’s just so well put together. I’m not an aficionado of the novels, but from what I know of the series, this is really very well put together, and offers a lot more than the show was able to.

That being said… I think this will work much better once it has all be collected (and what a collection that will be!). I can’t wait to get my hands on a complete compilation of the whole series (or, probably, a small number of trade paperbacks).

Overall? A brilliantly put together comic, with what feels like more content than I usually expect from a single monthly issue. Impatient readers would do better to read the novels and await a fully compiled edition, though. I think it also serves as another great introduction to the fantasy series – if you’re on the fence about diving into the epic novels, then try these out (and the HBO series); they’re sure to whet your appetite more, as they have mine.

A great taste of the world Martin has created, expertly adapted by Abraham and Patterson. I remain, however, on the fence about buying this as the individual issues are published, or waiting for inevitable collections. Maybe I’ll give it one more issue, and decide after that? We’ll have to see. In the meantime, I recommend people check this out.

Posted by Civilian Reader at 1:05 AM