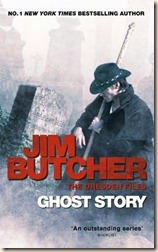 Harry Dresden finds himself in his most difficult situation yet, near-helpless to protect those he loves

The previous novel in Butcher’s cult Urban Fantasy series, Changes, saw Harry finally land himself in a situation that taxed even his well-practised ability to outwit, escape or incinerate the ever-growing forces of darkness that beset Chicago’s only wizard PI. Fans were left with a cliffhanger ending that suggested Butcher could be drawing the series to a rather final conclusion.

A turning point in the series, Ghost Story will please fans of the Dresden Files, who have come to love the characters and especially Harry, who is forced into self-reflection.

[BE WARNED: Major Spoilers for the previous book follow immediately after the break!]

Meet Harry Dresden, Chicago’s first (and only) Wizard PI. Turns out the ‘everyday’ world is full of strange and magical things – and most of them don’t play well with humans. That’s where Harry comes in. But he’s forgotten his own golden rule: magic – it can get a guy killed. Which didn’t help when he clashed with unknown assailants with his murder in mind. And though Harry’s continued existence is now in some doubt, this doesn’t mean he can rest in peace. Trapped in a realm that’s not quite here, yet not quite anywhere else, Harry learns that three of his loved ones are in danger. Only by discovering his assailant’s identity can he save his friends, bring criminal elements to justice, and move on himself. It would just be easier if he knew who was at risk. And had a (working) crystal ball. And access to magic. Instead, he is unable to interact with the physical world – invisible to all but a select magical few. He’s also not the only silent presence roaming Chicago’s alleys. Hell, he put some there himself. Now, they’re looking for payback.

Happily, this, the thirteenth book, continues Harry’s adventures, though he isn’t quite himself. Left for dead at the end of Changes, Harry discovers that the light at the end of the tunnel really is an approaching train, as he finds himself in a shadowy Chicago full of ghostly monsters, spirits both vengeful and protective, and others who also exist between two worlds.

He discovers how much he meant to those he left behind, and how it feels to discover they are in danger, and to be helpless to protect them, cut off from the magic that he needs to protect them.

In Harry Dresden, Butcher has created a hero both admirable and flawed – and perhaps more admirable for those flaws. Harry walks a fine line between good and evil, and the tension between those two states makes for a riveting read. In Ghost Story Butcher manages to combine his trademark wit with real emotion. Part of his skill as a writer is creating characters that are fully realised, that you really care about.

While the last few books have seen Harry becoming angrier and treading ever-closer to becoming as bad as the monsters he seeks to defeat, Ghost Story forces him to take a step back. He can observe events, but is unable to affect them as he used to, and will likely emerge wiser for it. Wherever Butcher chooses to take his series, this book marks a turning point.

Undoubtedly one of the best urban fantasies out there, by one of the finest fantasy writers working today, Jim Butcher’s latest offering is sure to keep readers wanting more. Highly recommended.

Posted by Civilian Reader at 7:42 AM