An Interview with HOWARD ANDREW JONES

Howard Andrew Jones has served as managing editor of the highly respected Black Gate fantasy magazine since 2004. In January, his first full-length novel, The Desert of Souls, was released to much acclaim. I decided to ask him some questions, and he was kind enough to respond with his thoughts on writing, fantasy, and more.

Let’s start off with your debut novel, The Desert of Souls. How would you introduce it to a new reader?

I usually like to recap the thumbnail descriptions some reviewers have given it: Desert is like Sinbad crossed with Indiana Jones, or Holmes and Watson in the Arabian Nights. It’s a buddy novel set in the ancient 8th century, complete with swordplay, sorcerous secrets, fantastic creatures and fabled places. 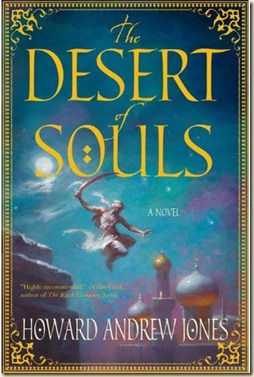 You have also compiled a collection of short stories featuring the same protagonists, The Waters of Eternity. What will readers find within this collection? And will it be available in the UK…?

It WILL be available in the UK. The e-book collects six short (well, some are long) stories featuring Dabir and Asim facing off against various things man was not meant to know, along with some more human adversaries. A sneak-peek of the first four chapters of The Desert of Souls is included as well.

Most of these stories appeared in various magazines and anthologies in the ten years before I drafted the novel, though they are all set after The Desert of Souls. Like the novel, they feature the wise, but not infallible, scholar Dabir, and his best friend, the skilled warrior, Asim el Abbas. 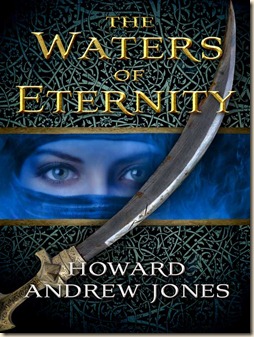 What was it like, taking these characters from short stories to a full-length novel?

It was a real pleasure. I’d wanted to stretch my legs and try a longer manuscript with these characters for a long time. Once I sat down to write the story of how Dabir and Asim joined forces a lot of it flowed so easily I wondered why I hadn’t done it sooner. But then I’ve been researching the 8th century and thinking about these characters for a long time, so I suppose I’d been preparing for years.

The follow up full-length novel, The Bones of the Old Ones, is scheduled for publication in late Spring 2012. Without giving away too much away, what can readers expect from book two, and where do you see the series going in the future?

I’ve signed on for four books and the e-book right now, and it’s my hope others will follow. Each will be standalone, although there will naturally be a chronological progression – the characters will age, and events in one book may have repercussions in the next. The Bones of the Old Ones features a completely new mystery for Dabir and Asim to unravel. A sorceress who had a brief appearance in The Desert of Souls returns with a major role. Poor, practical Asim discovers to his surprise he’s fallen in love with a woman who may be doomed. Bones features some extensive travelling to areas of the ancient near east over the course of a month; the third book, The Maiden’s Eye, is set in Baghdad in early summer. Dabir has only five days to clear the name of a man condemned to death – the man married to his one true love, Sabirah.

All the novels will continue to feature the character interaction, swashbuckling swordplay, and sorcerous doings readers enjoyed in The Desert of Souls.

What inspired you to write the series? And who or what would you say are your greatest influences?

Biggest influences? Well, I’m putting the finishing touches on a longer article about this question for you right now [coming next week], but I can say Harold Lamb, Robert E. Howard, and Leigh Brackett are my top favorites. I would never have fallen in love with sword-and-sorcery and fantasy if I hadn’t read Fritz Leiber and Roger Zelazny, not to mention Ray Bradbury. And then there’s C.S. Forrester’s Hornblower saga, which I read multiple times, and the original Star Trek, and the stories of Catherine Moore and Henry Kuttner. And of course I might never have gotten involved in the Arabian Nights if I hadn’t been reading Sandman and come upon Neil Gaiman’s 50th issue of the comic, featuring Harun al-Rashid himself as a principal character. I am surely leaving out some other writers and works. What can I say? It’s an eclectic brew. 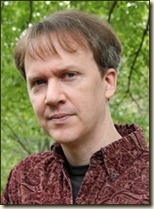 You bet I enjoy being a writer – this is what I’ve wanted to do most of my life. To finally have the time to write for a living is a tremendous gift and I try never to forget how fortunate I am.

I write historical fiction seasoned with fantasy, so I have to spend a lot of time reading, and re-reading, and re-re-reading reference books. I know that my novels will never be completely true to life, because I err on the side of emulating the feel of the Arabian Nights, but I do try to ground them in a semblance of the actual time period.

Other writing practices: well, I’m getting more and more precise with my outlines, and I try very hard to make my writing time count each day. I think every writer is going to approach things a little differently and a large part of the battle is learning which tips and tricks other writers use will work for you, and which ones you can tweak, and which ones just aren’t much help.

I’ve wanted to be a storyteller from as far back as I remember. I don’t know if I could look back fondly on my work writing Super Elephant comics as a 5-year-old, but I must have enjoyed them.

Do you have any other projects currently in the pipeline? 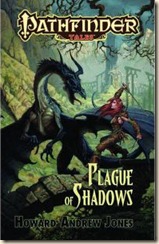 I’ve written a novel for the Pathfinder fiction line and just signed on to draft another featuring the same characters. Pathfinder is an RPG setting that allows for a whole range of approaches, and I was permitted the chance to create some characters with a real straight up sword-and-sorcery feel. I’ll be revisiting the haunted elf Elyana and her noble half-orc friend Drelm when I start work on the piece some time in 2012.

There are a number of other projects I have in outline stages, but I am too busy with Dabir and Asim to do much more than jot occasional notes.

Like a lot of readers and writers my to-be-read pile is overflowing. Two recent acquisitions are at the top of the stack, though. The first is Seven Princes, by my friend and fellow Black Gate writer, John Fultz. He was kind enough to pass an advanced reader’s copy my way at the World Fantasy Convention this year, and I’m halfway through. It’s killing me that I haven’t had a chance to dip back into it, because it’s a dark sword-and-sorcery novel with compelling characters and great momentum. The other book at the top is a beautiful hardback collection I just picked up from Haffner Press, also at the World Fantasy Convention. Leigh Brackett, queen of space opera, is one of my very favorite writers, and Haffner has collected all of her short fiction in four beautiful hardback volumes. I just picked up the fourth, Shannach – the Last: Farewell to Mars, and it has some Brackett stories I have NEVER read. I can hardly wait, but I must, as I am still honing The Bones of the Old Ones.

Non-fiction wise, I am leaning on an ever-expanding library of books about the ancient middle-east. Recent acquisitions include Amira K. Bennison’s immensely entertaining The Great Caliphs and Guy le Strange’s Baghdad during the Abbasid Caliphate, which has proved absolutely vital to planning book 3. Le Strange combined all the period sources he could lay hands on and created a map of the ancient city, complete with all roads, canals and landmarks. It’s so thorough that it’s mind-boggling.

I’m not sure that I have too many surprises, but I’ll see what I can come up with. I earned a minor in creative writing, but I wasn’t an English major. I have a degree in radio-tv-film and used to be a production assistant at an NBC TV station, which meant running camera, editing videotape, and writing commercials. There’s probably a few commercials floating around somewhere on the web that have twenty-something me as a spokesman. I’m a competent piano player and worked for years trying to launch a career as a songwriter. I suppose the thing that surprises a bookworm like me the most about myself is that I earned a first degree black belt in Shotokan karate. I’d been going to school all my life, so graduating high school, college, even obtaining the master’s degree, might have been hard work, but I knew I could succeed. I was never that much of an athlete, though, so whenever I think about earning that black belt, it makes me smile with pride. I hope one day to return and finish my second degree.

The Desert of Souls is a novel that has eluded me for almost a year. It has received praise from a great swathe of the fantasy community, so I have been most frustrated with how difficult it’s been to get a hold of. Now, however, I finally have it! I will be reading it imminently, so expect a review very soon.

Posted by Civilian Reader at 7:35 AM

Email ThisBlogThis!Share to TwitterShare to FacebookShare to Pinterest
Labels: Bones of the Old Ones, Dabir and Asim, Desert of Souls, Fantasy, Howard Andrew Jones, Interview, Thomas Dunne, Waters of Eternity