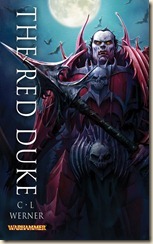 Once a valorous and honourable knight of the realm, the Red Duke was betrayed and struck down in battle but rose again before death could truly claim him. As a bloodthirsty vampire lord he undertook a long campaign of butchery and terror before being defeated once more, and entombed for all time so that he could never again menace the Old World. But centuries later the witch Jacquetta resurrects this ancient evil, and the Red Duke stalks the night again – a new reign of terror plagues the lands of Bretonnia!

CL Werner is Black Library’s best horror writer. He has a gift for writing the macabre that is near peerless, and in The Red Duke, he offers us a dark tale of revenge, obsession, madness and blood. This is sure to please lovers of Warhammer fiction as well as dark, horror-infused fantasy.

The first chapter suggested that the novel might give a nod to Anne Rice’s Interview with the Vampire – starting, as it does, with a recounting of the Red Duke’s legend and an encounter between the bard and the Duke – but this possibility is quickly quashed as the story kicks in properly. Werner instead strips away the romanticism of contemporary vampire fiction. The Red Duke evokes the horror, brutality and cunning of the vampires, rather than any potential beauty. The Duke himself is crazy, vicious, vindictive and unpredictable. This vampire is far more gritty, if you will: a vampire for the Joe Abercrombie age.

Chapters start with flashbacks that don’t necessarily follow on from the previous flashback. I didn’t find the rhythm of the novel quite as quickly as I have with Werner’s other work, as the switching between timelines made things a little choppy, and prevented much momentum from being generated and maintained – we’re only with each timeline a short while, so while it gives us the context for the Red Duke’s madness, I found that it didn’t allow me to properly get swept along by the story because I simply wasn’t with the characters long enough to form much of a connection. It’s certainly well written, and each flashback is interesting and does add to the story, I just wonder if there might have been a better way to do it? Or perhaps a better way to space and use the flashbacks for maximum impact and effect.

That the Red Duke is quite mad, as well as psychopathic, makes for an interesting read, and starts to explain the flashback sequences. Where, to begin with, they are background for the novel and characters, they soon become windows into the vampire’s fractured mind, as it becomes clear that he is struggling to differentiate between memories and reality, the past and the present. It makes those around him even more nervous about his violent and erratic behaviour. Although, there are a couple of his minions who see opportunity in the Duke’s weak grip on reality. For example, Renar, his pet necromancer:

“At least there would be no lack of opportunity to practice his black art, the necromancer reflected. When the Red Duke was like this, he had the endearing habit of razing any village they passed which he didn’t recognize, decrying the inhabitants as intruders and trespassers. And after five hundred years, there were few villages in Aquitaine the vampire would still recognise.”

There are a few other moments of dark humour sprinkled throughout the novel, which bring a twisted levity to an otherwise pretty grim and action-packed novel.

One niggle from early on in the novel is that a Bretonnian lord seemed a little too accepting of making a deal with a Chaos sorcerer – it’s not like the names of the Ruinous Gods are unknown to these people, but he just accepts it and goes along with the ritual. I thought this broke with the otherwise tightly-controlled Warhammer world, and it was a bit odd that the editor(s) missed it. It doesn’t ruin the novel by any means, but it was noticeable.

Werner’s prose style is great and fluid, painting some wonderfully atmospheric scenes of dark magic and horror. There’s a token mention of the Skaven, too (otherwise, it just wouldn’t be a Werner novel – see here and here). The author has improved a great deal from his Brunner series (one of my favourite series from BL’s fledgling years). I think Wulfrik is still my favourite novel by Werner, although I do have very high hopes for his upcoming Time of Legends novel, Dead Winter. While Red Duke isn’t perfect, it stands out strongly from not only much other Warhammer fiction, but also much horror-fantasy fiction.

Despite the problem with momentum resulting from the structural approach, this is a dark, at times visceral, oft creepy take on Warhammer vampire lore, featuring some very well-constructed and interesting characters. Recommended for those who like the darker side of fantasy.

Posted by Civilian Reader at 7:43 AM