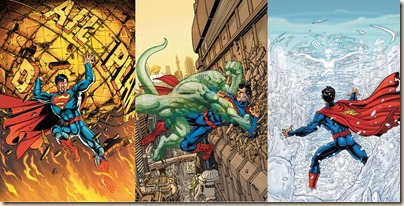 I wanted to try out another Superman-title, to see if it stacked up to any of the other New 52 titles that I’ve enjoyed so much, and how it compared to the Grant Morrison-penned Action Comics (which had a wobbly start, got better, but I’m left still not quite hooked). Superman was a good title, too, and with only a couple of wobbles, and I think shows a lot of promise. 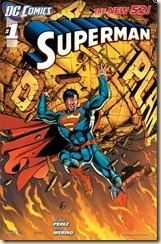 #1 – The new adventures of Superman begin here! What is The Man of Steel’s startling new status quo? How does it affect Lois Lane and The Daily Planet? There’s no time for answers now, because Superman must stop a monstrous threat to Metropolis – one that he somehow is the cause of!

#2 – The all-new adventures of Superman continue! Everyone can see the new villain who’s attacking Superman – except The Man of Steel! How can he stop a threat that none of his super-senses can detect? Meanwhile, a Daily Planet reporter starts digging up some dirt on Superman, including a secret that could ruin him forever!

#3 – Superman finds himself beset as a TV reporter at the new Daily Planet makes a case that Superman brings Metropolis more harm than good, while a vicious new foe attacks those nearest and dearest to Clark Kent! Who are all these new villains attacking Metropolis lately, and what deadly secret connects them? Superman’s not going to like the answer!

The first issue offers up a bit of a love letter to print journalism in the first few pages, as the Daily Planet (now gobbled up by a larger media company) struggles with the increased demands of the new media environment. Digital news, tweeting, immediate TV news are now the kings of journalism, and the Daily Planet is having difficulty keeping on top of it. Or, to be more accurate, Clark Kent is struggling with his disapproval of the Daily Planet sale – Lois Lane has been promoted and seems to be adapting rather well. 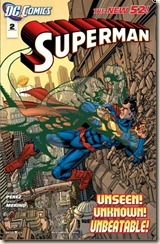 Each of these issues sees Superman face off against a separate, mysterious enemy. First, he must help extinguish a bizarre, living flame, which terrorises Metropolis and wreaks a fair bit of havoc. Superman’s victory against the flame creature has nothing on the second victory, however, against an enemy he can’t see at all! Thankfully, Metropolis is a city fully wired to modern news and television, and after Lois steps in with a pretty cool solution to Superman’s sudden and strange handicap, he is able to use his remaining abilities to bring things to a pretty cool conclusion. In the third issue, Superman faces an ice beast, which again requires some expert deployment of his super-abilities.

There are a couple of nods to events in Action Comics #1 and also forthcoming events in Action Comics #4, but also a box-out that refers to events in Stormwatch #1, which I have sadly not read. I still don’t know what the reference is to, or how significant it is. I’ll just have to take their word for it. That being said, I don’t think you need to have read any other issue or title to enjoy these. You get far more out of reading the three together, however, as you see a pattern developing, and hints as to what else might be going on (all the enemies are somehow linked) and what might be coming down the road in future issues. 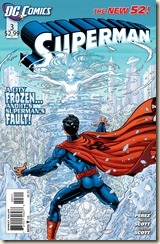 Perez’s writing across these three issues is pretty good. I like the premise and plot, and I didn’t have any problem with any of the dialogue – it’s realistic and lacking cliché. That being said, some of the narration in the first issue was a little clunky: either because it was too wordy, unnecessary, or inappropriate and incorrect words were used (simple stuff, like “thrusted”). It was very surprising to see this in such a flagship title. The problem disappears in issue two, which was a huge relief.

Perez gives us a new and interesting dynamic between Lois and Clark; one that made me really sympathetic towards Clark on the final page of issue one in particular. Perez delves into this more in the second issue, and it seems to be more like the dynamic from the first movie (my earliest experience with the character): Clarke is smitten by Lois, but it is an unrequited attraction. She thinks of him more as a friend than anything else and, like many of the Daily Planet employees, is concerned about a change in Clark’s character: he is more distant and erratic of late, not as dependable.

The art throughout these three issues is pretty great. It has a broad palette, and is very varied, always vivid, and never pedestrian. There are some nice, playful touches sprinkled throughout the comics, too (such as an obviously-meant-to-be-an-iPhone device with a Pineapple logo on the back). A visually pleasing title, certainly.

Overall, another very good title, with only a couple of niggles about some of the writing. It’s very promising, and I look forward to reading more of it.

Posted by Civilian Reader at 4:43 AM