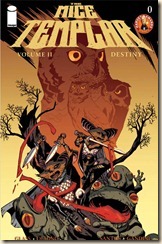 The Templar have fallen… Long ago, the warrior brotherhood destroyed itself from within through a vicious and bloody civil war. With the collapse of the once noble Order, all night-dwelling creatures of the Shadow Time now live in fear under a brutal rat regime who support the corrupt mouse king Icarus, determined that the valiant Templar of legend will never rise again…

This isn’t really a review, more a spotlight on this title. I just discovered it today, as there is a three-day half-price sale on Mice Templar issues at Comixology. This prequel is free to read online, and I was pleasantly surprised by it.

The story covers Cassius and the newly knighted Karic’s flight from the Great Ash Tree – home of the Templars, as far as I could make out. This is the prequel to the second volume, so a lot has come before the contents of this issue. There’s a pretty detailed The Story So Far on the inside front cover – although, instead of making me feel at home with the greater story, it made me miffed about missing out all that has come before.

Nevertheless, I didn’t actually read the catch-up text until after I read the issue – I was immediately drawn in by Santos’s art. Throughout, it’s very eye-catching, simple and clean, and suits the story and overall aesthetic very well.

The dialogue is kept formal and serious throughout, which was a great decision – it’s a little weird, reading formal, knightly prose coming from the mouths of mice wearing armour and carrying swords. Think of Brian Jacques Redwall novels, only in comic form. It also reminded me of Robin Jarvis’s The Deptford Mice, but not nearly as much as it did of Redwall (which I loved as a kid).

I don’t believe this is specifically aimed at a young adult audience, but there’s no reason as far as I can see that would prevent this from appealing to all fans of Jacques’s novels and also all fans of knightly adventure novels.

So, head on over to the website and give this a try. I really enjoyed it, and am going to try to find a collected edition of volume one.

Posted by Civilian Reader at 6:08 PM