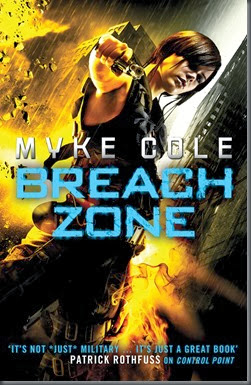 The Great Reawakening did not come quietly. Across the country and in every nation, people began “coming up Latent,” developing terrifying powers — summoning storms, raising the dead, and setting everything they touch ablaze. Those who Manifest must choose: become a sheepdog who protects the flock or a wolf who devours it…

In the wake of a bloody battle at Forward Operating Base Frontier and a scandalous presidential impeachment, Lieutenant Colonel Jan Thorsson, call sign “Harlequin,” becomes a national hero and a pariah to the military that is the only family he’s ever known.

In the fight for Latent equality, Oscar Britton is positioned to lead a rebellion in exile, but a powerful rival beats him to the punch: Scylla, a walking weapon who will stop at nothing to end the human-sanctioned apartheid against her kind.

When Scylla’s inhuman forces invade New York City, the Supernatural Operations Corps are the only soldiers equipped to prevent a massacre. In order to redeem himself with the military, Harlequin will be forced to face off with this havoc-wreaking woman from his past, warped by her power into something evil…

In this, the final part of Cole’s first trilogy, we have an excellent conclusion. Not only do we see the events of the last three books come together, but the story digs deeper and offers more than either of its predecessors. The author has really pulled out all the stops for this one, and written a really fantastic novel.

The novel is set predominantly in Manhattan, with a few scenes and events taking place in or around the New York area – for example, Bookbinder is on a ship off the coast, testing a new device just as the action kicks off. Harlequin is at the centre, which I liked, as it turns out he is a far more nuanced character than we might have seen in the previous novels (which were through the eyes of people who often were on the wrong side of him). As he takes command of the incursion on Manhattan, we get to see him in action, struggling to keep the hordes from the Source at bay, while also attempting to marshal allies from the Manhattan Selfer underground and also keep the military and law enforcement forces available in line and manning the barricades.

The action is as well-written and realistic as before, with plenty of intense moments that place the reader right alongside the combatants, in the thick of the fighting. I particularly enjoyed seeing the sorcerers let loose, unleashing their myriad powers in devastating and creative ways – the way Cole has developed and devised the various ‘schools’ of magic is fantastic, and he always surprises with the ways in which the powers can be interpreted, and yet still grounded (somewhat) in reality. It was also great to read about the urban conflict taking place in neighbourhoods I have spent many a day walking. I don’t know why everyone seems so keen on destroying New York City in fiction, TV and movies…

What I found most interesting with this novel was how the action was not the best element. In fact, it faded slightly into the background for me. I thought the flashback chapters, detailing Harlequin’s past with Scylla, were absolutely superb, and showed that Cole is not just an excellent military-sci-fi writer. (True, we knew this from Control Point and Fortress Frontier, but in Breach Zone his talent really shines on all fronts.) With this, his third novel, Cole has well and truly arrived. He has written a novel that is just better in every way. The balance between action, character development and world-building was spot-on. As with the previous two novels, I also really liked the use of chapter epigraphs to add further colour and background to the world/reality he has created.

As I mentioned on Twitter when I was reading it, Breach Zone is like a perfect blend of Marvel’s Avengers and the Battle for Helms Deep. Only, better. To draw another comparison to comics, it’s not difficult to see similarities between Scylla and X-Men antagonist Magneto, as she espouses a similar reorientation of society, with the latents on top. Cole’s use of the flashbacks to detail her evolution from high-powered CEO to prisoner of the SOC was deftly done, fleshing out her character and showing us the dangers of government paranoia, overreach and overreaction. She’s a tragic figure, and her relationship with Harlequin just one of the casualties of a frightened government’s policies to control that which it cannot control, nor understand.

If you haven’t read any of these novels, yet, I strongly urge you to do so. I’ve been saying it ever since I read Control Point, but with each novel it becomes clearer: Myke Cole is a fantastic new talent, and if each of his novels improves on the last, it won’t be long before we see him climbing ever-higher on the bestseller list.

Myke Cole’s Shadow Ops trilogy – Control Point, Fortress Frontier and Breach Zone – are published by Headline in the UK and Ace Books in the US.