Wait, the first two of those books have already been published, right…? Well, yes. Now, though, they are going to be published by a better publisher with better distribution and better artwork. This series made a bit of a splash when No Hero first appeared in 2011. Since then, Wood’s original publisher (Night Shade Books) has experienced a number of… troubles. But fans of the series – existing and prospective – have nothing to fear, for Titan Books has recently acquired publishing rights for the Arthur Wallace series! Here are the details of the three books (thus far): 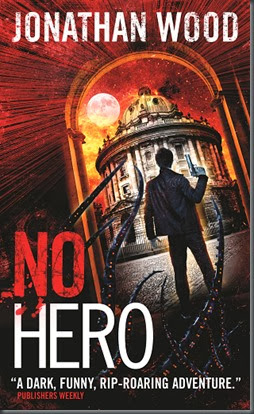 “What would Kurt Russell do?”

Oxford police detective Arthur Wallace asks himself that question a lot. Because Arthur is no hero. He’s a good cop, but prefers that action and heroics remain on the screen, safely performed by professionals. But then, secretive government agency MI37 comes calling, hoping to recruit Arthur in their struggle against the tentacled horrors from another dimension known as the Progeny. But Arthur is NO HERO!

Can an everyman stand against sanity-ripping cosmic horrors? 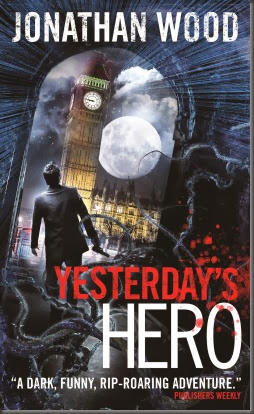 Another day. Another zombie T-Rex to put down. All part of the routine for Arthur Wallace and MI37 — the British government department devoted to defending Britain from threats magical, supernatural, extraterrestrial, and generally odd.

Except a zombie T-Rex is only the first of the problems about to trample, slavering and roaring, through Arthur’s life. Before he can say, “but didn’t I save the world yesterday?” a new co-director at MI37 is threatening his job, middle-aged Russian cyborg wizards are threatening his life, and his co-workers’ are threatening his sanity.

As Arthur struggles to unravel a plot to re-enact the Chernobyl disaster in England’s capital, he must not only battle foreign wizards but also struggle to keep the trust of his team. Events spiral out of control, friendships fray, and loyalties are tested to their breaking point.

Yesterday’s Hero is due to be published in September 2014.

What do you do when your best friend becomes a supervillain?

Agent Arthur Wallace is used to dealing with danger that is extraterrestrial, supernatural, or generally odd. But when a drone-strike interrupts his best friend’s funeral, it becomes clear that his next assignment is going to be stranger than usual. When it turns out that the drone was hijacked by a rogue, digital version of that friend… well then nothing is clear to Arthur any more.

Anti Hero, which has not been available before (to my knowledge), is due to hit shelves in March 2015. I’ll be sure to share the artwork as soon as I spot it.

Also on CR: Interview with Jonathan Wood, Guest Post on Living With Consequences

Posted by Civilian Reader at 7:50 PM