Guest Post: “How Did I Come To Write ‘What Makes This Book So Great?’” by Jo Walton 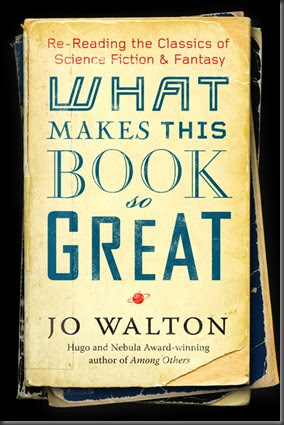 Jo Walton is a prolific writer and reviewer of speculative fiction and more. One of her newest titles is a collection of essays, adapted from her work for Tor.com, What Makes This Book So Great? Here, Walton addresses how the book came about.

The answer to the question “How did I come to write this book?” is that I didn’t. I never wrote it. I wrote a series of blog posts for Tor.com – hundreds and hundreds of them. In all of them I was burbling about books and the way people read. My brief on the blog is to say interesting things about books nobody else has thought about for ages. I read very fast, and I do re-read a lot. I read new things too, but I also enjoy re-reading – and the first thing I ever wrote for Tor.com was the first essay in the book about why I like to re-read. So I re-read old favourites and shared my enthusiasm about them, and along the way I examined some questions about what happens when you re-read a book and don’t enjoy it any more, and the question of why people love reading series. It was exciting to be able to draw people’s attention to books I love that seem neglected or under-rated, like Karl Schroeder’s Lady of Mazes and Terri Windling’s The Wood Wife. I had a lot of fun writing the posts and starting conversations. 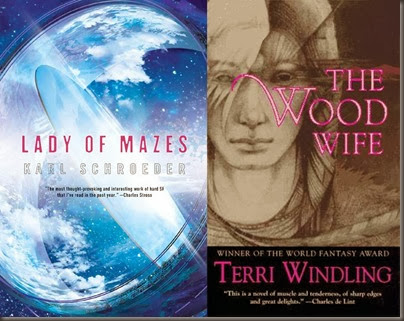 But all this was blogging, not writing a book. I didn’t think of the posts as the kind of thing that could be published in book form until Patrick Nielsen Hayden suggested that they could be. He and Teresa Nielsen Hayden came up to Montreal for a weekend and the three of us sat down together with a huge pile of printout of all my posts to select a representative and interesting sample to make into a book. We made a lot of selection decisions and also decided to keep the posts chronological, instead of organizing them by some other principle. Doing that selection was hard work but also a lot of fun. So I feel as if I wrote the posts and then assembled the book, but not that I really wrote the book, certainly not in the way I write fiction.

This isn’t a book of reviews – reviews are immediate reactions to new books, and by the nature of things a reviewer is going to feel negative about some of what they’re given to review. These are not first thoughts on books but second thoughts, thoughts after reflection. But I’ve also been a little disconcerted at people referring to it as a book of criticism. I don’t feel as if it’s that at all. Criticism is the kind of thing Gary Wolfe and Farah Mendlesohn and John Clute do – you have to be trained to do criticism. There are people writing wonderful SF criticism these days. It’s part of an academic conversation. This book is much more part of a fannish conversation. My qualification for writing these posts isn’t that I write fiction, it’s that I love reading. I’m not considering things objectively. I haven’t read secondary literature. This is a book of my thoughts about books. It’s  saying “This thing, this thing is interesting and important and this is why I love it – and you might love it too!”

Most of the books discussed are SF and fantasy, because I love SF and fantasy, and because that’s the main focus of Tor.com. But I read widely, and so though there are occasional pieces about other things, George Eliot and Dorothy Sayers and so on, but always with a genre sensibility. And despite what it says on the cover, they’re not all classics by any means. This isn’t an attempt at a history of genre fiction or a survey of the highlights or anything of that kind. It is what it says in the title – me explaining what, in my opinion, makes them so great.

What Makes This Books So Great is published today by Corsair Books in the UK. Here’s what Patrick Neilsen Hayden, a senior editor at Tor Books, had to say about the volume’s content, in the announcement on Tor.com:

Included are discussions of books by authors ranging from Vernor Vinge, Robert A. Heinlein, and Jerry Pournelle, to Ursula K. Le Guin, Connie Willis, and Susanna Clarke. Several long series get examined in strings of essays; in particular, Jo re-reads and discusses all of Lois McMaster Bujold’s “Miles Vorkosigan” novels, and all of Steven Brust’s “Vlad Taltos” books, in long multi-part considerations. There are examinations of books you’ve never heard of; there’s at least one essay about a book I’d never heard of. There are insightful and (sometimes) irreverent looks at established classics... and several sharp looks at why and how certain works of the sort that George Orwell called “first-rate second-rate books”... are sometimes exactly what we want to re-read. Taken together, the 130 essays in What Makes This Book So Great are a wonderful immersion in the mind of Jo Walton and a fantastic set of insights into what makes SF and fantasy tick.

In related news, Jo Walton’s Small Change trilogy – FARTHING, HA’PENNY, and HALF A CROWN – are to be re-issued in paperback by Corsair in February 2014. Expect reviews of them in the not-too-distant future here on Civilian Reader. In the meantime, here are the synopsis for book one and three new covers…

Eight years after they overthrew Churchill and led Britain into a separate peace with Hitler, the upper-crust families of the “Farthing set” are gathered for a weekend retreat. Among them is estranged Farthing scion Lucy Kahn, who can’t understand why her and her husband David’s presence was so forcefully requested. Then the country-house idyll is interrupted when the eminent Sir James Thirkie is found murdered – with a yellow Star of David pinned to his chest.

Lucy begins to realize that her Jewish husband is about to be framed for the crime – an outcome that would be convenient for altogether too many of the various political machinations underway in Parliament in the coming week. But whoever’s behind the murder, and the frame-up, didn’t reckon on the principal investigator from Scotland Yard being a man with very private reasons for sympathizing with outcasts and underdogs – and prone to look beyond the obvious as a result.

As the trap slowly shuts on Lucy and David, they begin to see a way out – a way fraught with peril in a darkening world.

All three novels are already available as eBooks (and Farthing is at a real bargain-price on Amazon, at the time of writing). 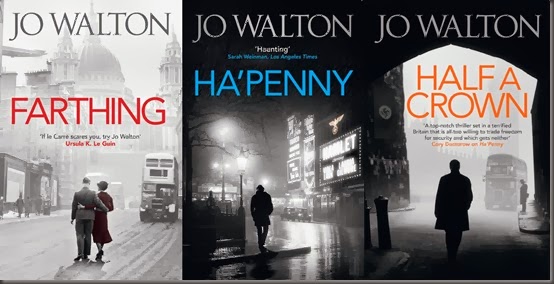