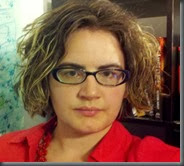 Kameron Hurley is an award-winning writer and freelance copywriter who grew up in Washington State. She is the author of the book God’s War, Infidel, and Rapture, and her short fiction has appeared in magazines such Lightspeed, EscapePod, and Strange Horizons, and anthologies such as The Lowest Heaven and Year’s Best SF.

I’ll sometimes hear folks musing about where the “gritty” hero came from. And though you’ll get a lot of knee-jerk responses of the “Well, it’s a reaction to traditional goody-goody heroes,” I’d argue, in fact, that gritty, unlikeable heroes have been around a lot longer than you’d think. Gormenghast wasn’t exactly full of heroes. It was full of idiots and backstabbers. We just didn’t celebrate them. They were funny.

Oh, sure, what littered the shelves as I was growing up in the ’80s and ’90s were indeed mostly traditional sorts, I suppose. But there were notable exceptions – Jennifer Roberson’s Tiger, Mary Gentle’s Ash, and let’s face it, you know, Conan wasn’t a sweetheart fun dude.

But the hero who broke all the rules – who didn’t really save the world, who didn’t get the girl that tore me up the most – was Fitz in Robin Hobb’s Assassin’s Apprentice. I’d argue Hobb’s semi-tragic hero, who did not slay the dragon or win a kingdom (even Joe Abercrombie’s characters sometimes win a kingdom) or run off with the love of their life, was among the first to start the shift toward a hero who was a bit more gray, a bit more complex, and whose end was a lot less predictable than most. Fitz was the Catalyst. He was the person great events moved around. He was not the active agent. Only the spark.

In truth, on looking at a lot of fantasy heroes and heroines of the past, what I found had changed most between, say 1970 and 2004 wasn’t the level of grit or gritty. After all, there was a lot of dark, messed up stuff going on in the New Wave (The Stars My Destination, for a brief departure into SF-land, was hardly full of nice people). Instead, what changed was this idea that the good guys were always going to win. That the Big Bad would be defeated. So you got heroes like Fitz, and KJ Bishop’s war-wrecked veterans, who, it could be argued, often did more harm than good. Maureen McHugh writes complex characters whose endings always tend to be ambiguous, sort of non-endings, more abrupt halts than tying up all the loose ends.

What we’re falling in love with, over time, isn’t necessarily the grittiest jerk with a sword – we had Conan for that. What began to happen is that we craved more complexity in our stories. And with complexity comes a good deal of ugliness. The bad guys sometimes win. Sometimes it’s not even clear who the bad guys are. Oh, sure, folks wrote dark, complex fiction prior to when the term “grimdark” popped up, but grimdark – tragedy, complexity, brutality - of this type has been especially sought after from the early 2000’s. Just as New Weird started becoming a Named Thing, the dark fantasy writers were beginning to get more attention, too. 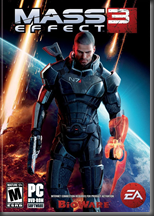 It’s been interesting to watch video games go through this same tilt toward the more complex, the tragic. I sobbed my way through Mass Effect 3, while the galaxy was being destroyed around me. And… I found it deeply cathartic. But… why? What are these complex stories giving me that fluffier, more comfortable stuff isn’t?

I’d argue this love of the grim and complex isn’t just about the maturity of an art form, but a reflection of the times we live in. The United States has been at constant war since 2001. That’s thirteen years of war. That kind of war – even one conducted on far shores, and brutally ignored in our media – seeps into everything. The world looks a lot more complex when you’re fighting in residential areas and sending drones to blow up wedding parties, doesn’t it?

Our fiction, the stories we were interested in, changed too. Because war gets into your bones. Veterans come home. The war they fought not only affects them, but everyone around them. It bleeds into everything.

And that seepage is nothing compared to the grim reality faced by those whose countries we waged war in.

So when people tell me that the rise of gritty, complex fiction is a reaction against traditional heroes, or something only aliened teen boys read, I can’t help but sigh. Because I’m seeing the desire for grim stories from another angle. From the position of a people who perpetuate violence on others but have very little experience of violence. People struggling to figure out who the good guy is, because, increasingly, as they look in the mirror they realize that it isn’t as clear as it once we.

We look for ourselves in our stories. It’s how we make sense of the world.

The gritty and traditional heroes are products of their times. We used to believe we were right. We’d always win. The world was black and white. As the world is split wide open with greater access to information and instant communication, many are waking up to that fact.

It’s the gray heroes we see – the ones who don’t always win. The ones who bring more war than peace. Who solve disagreements with brutality. With force. And fear. And fault.

And we’re not traditional heroes.

Kameron’s God’s War, Infidel and Rapture are published by Night Shade Books in the US and Del Rey in the UK (only God’s War has been released so far in the UK). 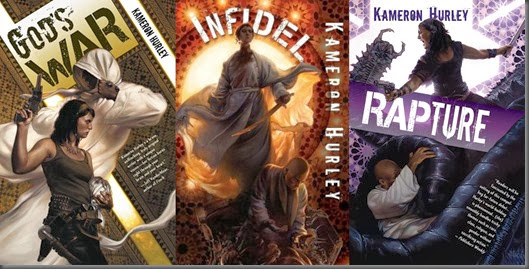 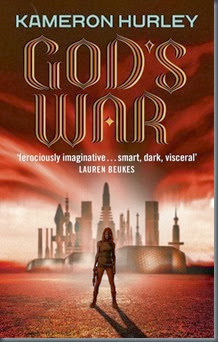