Anne Bishop’s award-winning BLACK JEWELS trilogy is coming to the UK! The first trilogy in the series will be published in the UK by Jo Fletcher Books: Daughter of the Blood (March 6th 2014), Heir to the Shadows (May 1st), and Queen of the Darkness (July 3rd). JFB are publishing the first trilogy in Bishop’s Urban Fantasy series, but in the US the series has already grown to nine books, published by Roc Books. (If they’re as successful in the UK as across the pond, I’m sure the others will soon follow!) Below are the synopses for the three novels, and also the covers for the first two (third hasn’t been unveiled just yet). 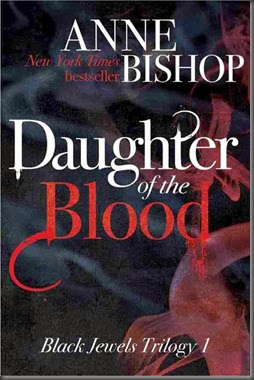 DAUGHTER OF THE BLOOD:

The Darkness has had a Prince for a long, long time. Now the Queen is coming.

For years the realm of Terreille has been falling into corruption, as the powerful Queens who rule it have turned to cruelty.

But there is hope – a prophetic vision has revealed the coming of a Queen more powerful than any other. And once the foundations of her power – father, brother, lover – are in place, she will emerge from the darkness, bringing freedom.

For she is the living myth, dreams made flesh; not just any witch, but Witch. 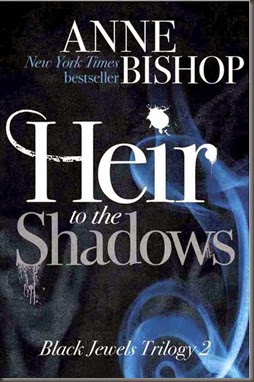 HEIR OF THE SHADOWS:

Witch – the Queen who would bring freedom to the realms – has come, but now she is lost in darkness, and has a long road to recovery ahead of her.

While her adopted father, Saeten, waits for her to return to the living world, the third side of the triangle needed to complete the prophecy – the lover, Daemon – walks in the Twisted Kingdom on the edge of madness.

As insidious whispers and dark schemes ferment treachery and betrayal, Jaenelle must make a choice: to protect those she loves, she must be more than an heir, she must become a Queen.

QUEEN OF THE DARKNESS:

Jaenelle Angelline now reigns as Queen-protector of the Shadow Realm. No longer will the corrupt Blood slaughter her people and defile her lands. But where one chapter ends, a final, unseen battle remains to be written, and Jaenelle must unleash the terrible power that is Witch to destroy her enemies once and for all.

Even so, she cannot stand alone. Somewhere, long lost in madness, is Daemon, her promised Consort. Only his unyielding love can complete her Court and secure her reign. Yet, even together, their strength may not be enough to hold back the most malevolent of forces.

This third synopsis was taken from the US edition, as JFB haven’t yet released information, outside of the publication date, for their edition. I don’t imagine it’ll be that different – it is, after all, the same book (there may just be a few tweaks).