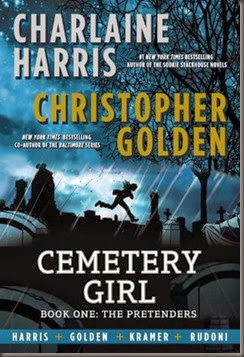 She calls herself Calexa Rose Dunhill — names taken from the grim surroundings where she awoke, bruised and bloody, with no memory of who she is, how she got there, or who left her for dead.

She has made the cemetery her home, living in a crypt and avoiding human contact. But Calexa can’t hide from the dead — and because she can see spirits, they can’t hide from her.

Then one night, Calexa spies a group of teenagers vandalizing a grave — and watches in horror as they commit murder. As the victim’s spirit rises from her body, it flows into Calexa, overwhelming her mind with visions and memories not her own.

Now Calexa must make a decision: continue to hide to protect herself — or come forward to bring justice to the sad spirit who has reached out to her for help...

This is Charlaine Harris’s first original graphic novel project. Teaming up with fellow New York Times bestselling author Christopher Golden, they have come up with something pretty interesting, too. The Pretenders is the first part of a trilogy, and as a result does not present a tidy ending. In fact, rather the opposite: by the end of the book, Calexa has helped solve one crime, it’s true, but along the way readers will be confronted by a number of intriguing questions and mysterious goings-on – be they Calexa’s memories or her new-found powers.

The artwork throughout is pretty good – it’s nothing particularly unique, but it is clean and clear; and overall the compositions enrich the story and realise it in a vivid, eye-catching manner. The story itself moves at a good clip: despite the relative slimness of the book, the story doesn’t feel rushed, but not does it feel drawn out. In fact much of the story focuses on Calexa getting used to, and making her life in the cemetery (now you know where the series title comes from), and I actually liked this. The Urban Fantasy equivalent of the Origin Story, perhaps? The synopsis states that she avoids people, which is for the most part true, however, despite her sneaking about, there are a couple of people who learn of her existence and extend a helping hand (albeit clandestinely). For me, it was this part of the story – one of unexpected kindness and help – that stood out. No doubt, with parts two and three, the supernatural shenanigans and Calexa’s past will be unveiled. I’m certainly looking forward to finding out the true about what brought our protagonist to the cemetery in the first place, but in the meantime, The Pretenders is a great introduction to this setting.

Recommended for all fans of Harris’s and Golden’s previous prose-fiction, but also Urban Fantasy as a whole and comics that dabble in similar territories (for example, the Buffy graphic novels, which Golden has also worked on).