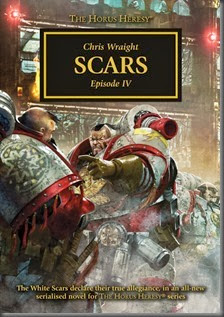 The next six parts of the serialised Horus Heresy novel

Of all the Legiones Astartes, the White Scars of Jaghatai Khan remain the most enigmatic and elusive. Born of a civilisation that prizes honour, speed and fearsome loyalty, their allegiance has yet remained unclear even as the galaxy is torn apart by Horus’s treachery, and both sides have apparently counted them among their potential allies in the war to come. But when the Alpha Legion launch an unexplained and simultaneous attack against the White Scars and Space Wolves, the Khan must decide once and for all whether he will stand with the Emperor or the Warmaster... or neither.

Originally, I was going to read this serialised novel in chunks of three ‘episodes’. However, after leaving things for a little longer than intended, I ended up blitzing though the middle six parts in one go. While I’m still not entirely sold on the serialisation-aspect of this project, I do believe Scars will shape up to be Wraight’s best Black Library work to date. This is a very good novel (so far).

I’m still not entirely sure how best to approach reviewing these episodes. As with the previous review, it’s a little difficult to decide on what is a spoiler, what isn’t, whether it should be approached as if these were a single, complete book? I’m going to try to walk a middle-ground, and just highlight some of the things I really liked about Scars so far, and some more general observations. The synopsis, above, does a good job of situating the reader, and I think only needs a little bit more for the purposes of the review.

Two of the best things about the novel are, first the plethora of Legions represented (eight with ‘proper’ characters, but another on the sidelines, referred to quite frequently), and second, the continued examination of what the new revolt and civil war has done to the Astartes – collectively and individually. Many of the characters are still struggling with the idea of open warfare between the Legions, how peculiar and abhorrent fighting their own kind, their cousins, is.

Fighting another Legion was an unsettling experience: they thought like he did, were as quick as he was and almost as familiar with the layout of his vessel. It was like fighting a mirror.

The Thousand Sons had been different. They’d already been half beaten once the Space Wolves had made planetfall, and their defence had been desperate and messily, confusedly defiant. The Alpha Legion had no such disadvantages: they were in better shape than the Wolves, better resourced and with the advantage of the initiative. They had come looking for this fight, for reasons that even Russ hadn't fathomed with any precision.

In addition to the confusion borne of the rebellion, the machinations of the Word Bearers and their allies in the Warp has only increased the problems facing the loyalists. Communications are effectively down – messages through the Astonomican are either delayed, garbled, contradictory, or nonexistent. At one point, the White Scars Primarch’s frustrations bubble over:

“I have the strength of the Legion arrayed before me, ready to strike. The ordu has assembled, and yet none can tell me who the enemy is. Tell them if they cannot interpret correctly then I shall come up to their spires and hammer their dreams into order for them.”

And later, he reflects on the situation:

The Khan almost felt like laughing. Nothing made sense. After years insulated from the rest of the galaxy, locked in a campaign that had promised little glory and much routine hard work, every certainty seemed to have been twisted into a comical level of incongruity.

True, these have become central themes of the Horus Heresy series as a whole, but the fact that it remains interesting after so many novels, from so many authors, is a testament to the skills of the writers involved, but also the strength of the overall project. It’s no mean feat to juggle all these novels, short stories, and audio dramas and maintain the quality (in fact, as I’ve mentioned before on the blog, from Graham McNeill’s A Thousand Sons onwards, the quality has been improving). 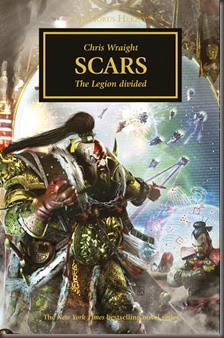 These episodes are littered with examples that explain the White Scars’ rarefied position among the Legions. They are set very much apart from their fellows. Sure, the Alpha Legion are mysterious, but they are known. They are infamously opaque and mysterious, and yet known because of that. The White Scars have simply been… absent. Off persecuting their own part of the Crusade, away from their brother Legions, without much support. This makes them very difficult to judge. When orders do arrive for the White Scars, however, and the Emperor and Dorn order the Khan’s Legion to return to Terra, to reinforce the throneworld’s defences, the Khan does not react well:

“I will not take direction from anyone, not even the Throneworld that only now, now that its Legions are tearing one another to pieces, deigns to remember that it has eighteen warrior-sons at its service... You are nobody’s slaves... We take orders from no one. We take no one’s word. We are on our own, just as we have always been, and if there is truth to be found in this, then we will find it for ourselves.”

Jagatai Khan is a pretty interesting Primarch. He’s enigmatic, even after reading this much of the novel. But this is, really, the root of his charm and why he remains a popular figure in Warhammer 40,000 mythology. There’s a great scene in which four Primarchs are gathered, shortly after Horus’s investiture as Warmaster (at Ullanor), and we get some interesting insight into his character. For example, this shrewd observation about his brothers:

Fulgrim and the Angel looked similar in some ways. They had the same sculptural faces, the same flamboyant armour. Where Sanguinius looked as though he had been born wearing gold-rimmed pauldrons, though, the Khan had always thought Fulgrim looked to be trying a little too hard. In the end, he guessed that Sanguinius would have been happy to cast off his trappings; Fulgrim gave the impression that he would rather die.

And then, as the four of them (Mortarian is also there – another Primarch who has remained rather out-of-sight for most of the series) discuss Horus’s new position:

Sanguinius smiled. “My brother, I think you are the most inscrutable of us all. I know what Rogal wants, and I know what Roboute wants, but even after so long I have no idea what you want.”

“He wants to be left alone,” said Fulgrim. “To shoot off into the stars and hunt down xenos on those delightful jetbikes. They’re devilishly fast...”

And we get to see just how fast all of the White Scars’ vessels can be. Much to the Alpha Legion’s surprise and detriment…

Things really start to hot up near the end of Ep.V, when White Scar psyker (or “weather witch” as his fellow Astartes call him) Yesugai stumbles across a Sons of Horus ship, crewed by a small band of Salamanders and Iron Hands, who have recently escaped the massacre on Isstvan V. He learns of the betrayal, putting to rest some of the confusion that has resulted from the White Scars’ isolation. This sets into motion the events of episodes VI-IX, which sees the White Scars hurtling towards revelations upon revelations, disappointments and betrayals. The story is shaping up very nicely indeed, and I can’t wait to read the final three parts of the novel.

As well as these larger issues are unfolding, we start to see more of Shiban’s investigation into the mysterious deaths on Phemus – deaths that appear to have been caused by Legion weapons. This leads him to his Terran friend, another White Scar, who is also an active member of a Warrior’s Lodge. A Lodge who may not be working in accordance with the Khan’s wishes, and are probably being manipulated by… well, long-time readers of the series will no doubt know the answer to that.

Of the other Legions featured in the novel, the Space Wolves come out of this in a very interesting light as well. The timeline places the novel shortly after their attack on Prospero to punish Magnus and the Thousand Sons. They are uncharacteristically somber, introspective, as they see the ripple-effects of their actions (sanctioned though they were), which leaves Leman Russ, their warlike, impulsive Primarch, to lament the state of affairs in the galaxy, of which he played an instrumental part in bringing about. Speaking to Bjorn One-Hand (who is well-known to fans of the tabletop game, as the Space Wolves’ dreadnought character, Bjorn the Fell-Handed – he also featured in Wraight’s SMB novel, Battle of the Fang), he muses:

“I never asked him [the Emperor] what he had in mind for us once the Crusade was over,” Russ went on. “I never asked him if we would be needed. Hardly matters now – if this madness can’t be stopped there will never be a time when we are not needed... The irony of it. Horus has given us the purpose we were beginning to lack. He’s made us useful again... Look what a mess we have made of things – me and my beloved brothers. You will have to pick up the pieces.”

Overall, then, this is shaping up to be another superb addition to the Horus Heresy series. Wraight has really outdone himself. I’m enjoying this a great deal. [But, yes, I would have preferred to read this all in one go, rather than in weekly instalments.] Bring on the final three episodes, and the next book in the series, Dan Abnett’s The Unremembered Empire.