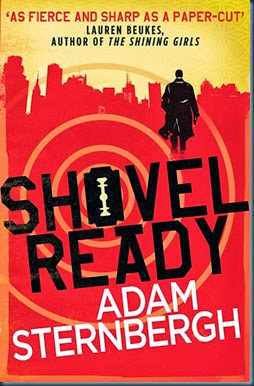 I first spotted a photo of a Shovel Ready ARC on Twitter (I forget exactly when it was, and who Tweeted the image), and I did some digging. Ever since, I have been rather looking forward to this novel. It’s still some time until it is published, but the new UK cover was unveiled today, and I rather liked it. So here it is, as well as the synopsis:

I don’t want to know your reasons.

Think of me as a bullet.

So he became a hit man.  He doesn’t ask questions, he works quickly, and he’s handy with a box-cutter.

Shovel Ready is due to be published by Headline in January 2014.