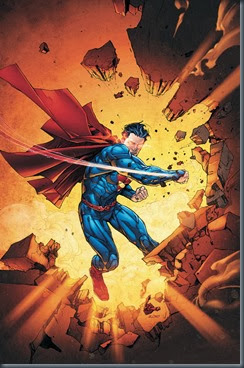 H’El has come to Earth. When a mysterious ghost from Krypton’s past comes to Metropolis in hopes of finding the lost planet’s last son, his arrival comes with disastrous consequences for not just Superman, but also for Superboy and Supergirl. H’El has decided that Earth is the place to resurrect Krypton, but the price the lives of everyone on the planet! Guest-starring the Justice League, Wonder Woman, Orion and more!

Continuing my attempts to catch up on a few New 52 titles, before I… uh… give them up… I actually quite like the Superman series. It wobbled a bit early on when the DC Powers That Be (DCPTB) decided to tie it in to the daemonite/Helspont mess that dominated the story-arcs of Grifter and Voodoo, but also roped in Stormwatch (and maybe a couple others?). I liked the greater attention paid to Superman/Clark’s everyday life, as a journalist and as someone navigating the changing industry and also his personal relationships. This collection of issues had a lot of this, too, and I’m certainly glad I read it. However, it also features the Superman issues that tie into the Super-family Event, “H’El on Earth”, which presented some issues for me.

As I just mentioned, I really like the focus on Clark’s non-super life. It’s something other readers really didn’t seem to like in earlier issues/books, but I think some of the most interesting content in the Superman mythos and character comes from his interactions with real life, how he handles his gifts, how he struggles to be “normal”, and how his over-developed sense of Right and Justice makes him stand out as a throwback to classic portrayals of the character or what would be considered “goody-two-shoes”, naïve characters today. For example, this monologue on the idealism of journalism: 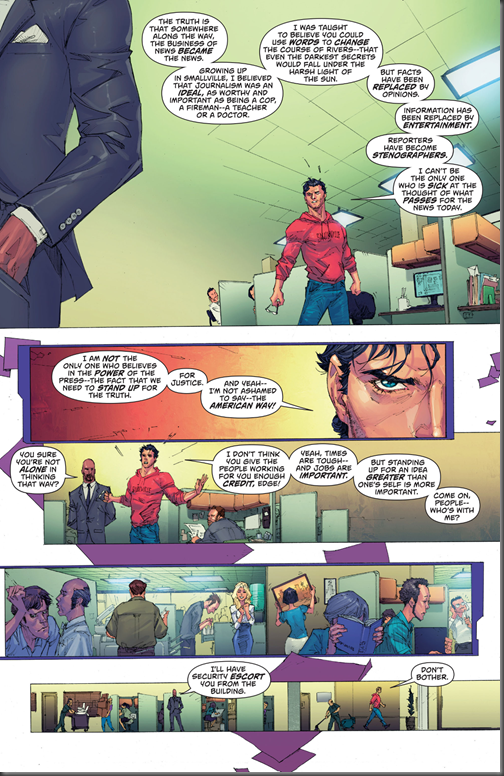 Unsurprisingly, Clark loses his job after this…

I’m not sure about the way Clark’s relationship with Lois is being written. His continued difficulty with her moving on, and moving in with Jonathan (although, I can’t remember who that is, exactly), seems forced. Given the timing and the events from the end of Justice League #12 (Superman’s kiss with Wonder Woman, and the start of their relationship), I found it difficult to consolidate his sense of justice and decency and this jealousy (even if it did make him out as more human). I felt bad for Diana, to be honest, that he is with her and yet pining for Lois. Given that the New 52 Superman had been steering clear of a Clark-Lois romance (I thought purposefully), it felt a little bit like a manufactured conflict for Clark. It’s well-written, though. Just felt a little out of place, given the stated intentions of the DCPTB. I would, however, accept that I may have missed something, given how much time lapsed between reading these issues and anything before. 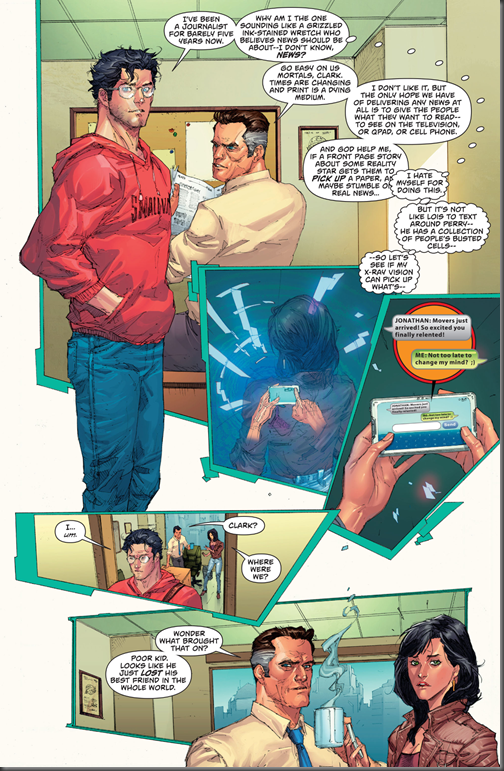 The “H’El on Earth” stuff, which is woven around and over Clark’s ‘mundane’ life, is kind of a typical, Supehumans-Breaking-Stuff-in-Large-and-Improbable-Manner tale. It’s… fine. But if you think about it, highly over-done. I’m looking forward to an understated Superman story. Something that doesn’t require him to just be invincible and strong enough to bench-press more than the weight of the Earth (as we are informed he apparently can do, at the start of issue #13). The exaggeration is, I understand, part of the charm of Superman – for some, it seems to be all they want. But for me, I would really like some more variation in the approach to the character. 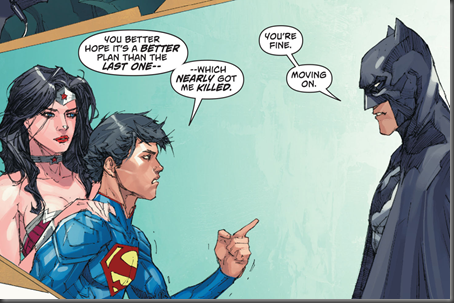 I do so love Batman’s cavalier attitude…

After “H’El on Earth”, there are two issues of strangeness, involving Orion (who made out with Wonder Woman in her solo series), and Hector Hammond (of the massively-bloated head – who I last saw in Green Lantern pre-New 52, I think... I don’t quite remember). Issue #19 was not too well written, sad to say. It felt clunky, with some info-dumping, and a little too heavy on telling and lesser writing for the first six pages. What happened? Things improved at Lois’s house-warming party. But then everyone starts to act strangely, and the issue ends as Orion catches up with Superman. I was left none-the-wiser as to what was going on. I guess I’ll have to wait until I can pick up the next few issues (those that will comprise volume 4, I suppose).

Not bad, but starting to show cracks. I hope this gets better, and doesn’t end up spinning its wheels, while the DCPTB try to come up with another cross-series Event to generate sales. In the meantime, I shall investigate some of the older Superman stories – for example, For Tomorrow, Lex Luthor, Superman For All Seasons, Secret Identity and maybe some others.