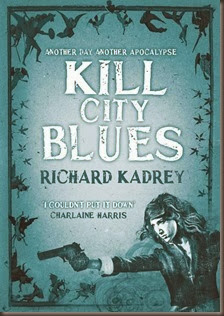 Sandman Slim is back on Earth, Averting Apocalypse & causing mischief…

James Stark, aka Sandman Slim, has managed to get out of Hell, renounce his title as the new Lucifer, and settle back into life in LA. But he’s not out of trouble yet. Somewhere along the way he misplaced the Qomrama Om Ya, a weapon from the banished older gods who are also searching for their lost power.

The hunt leads Stark to an abandoned shopping mall – a multi-story copy of LA – infested with Lurkers and wretched bottom-feeding Sub Rosa families, squatters who have formed tight tribes to guard their tiny patches of this fake LA. Somewhere in the kill zone of the former mall is a dead man with the answers Stark needs. All Stark has to do is find the dead man, get back out alive, and outrun some angry old gods-and a few killers-on his tail.

In the fifth Sandman Slim novel, we get more of the same. In both a good and less-good way. Kadrey serves up another dose of gritty, sometimes gnarly, often amusing supernatural urban fantasy. All the hallmarks of the Sandman Slim series are on display – the interesting and inspired twists on classic urban fantasy and horror denizens and creatures. His characters are quippy and interesting, not to mention developing rather nicely. The action is well-written, and doesn’t take over from the plot (of the novel or series’ meta-plot). I still love Kadrey’s version of Hell, God, Lucifer and Samael (former Lucifer). All the characters feel very real, now, even if they are outlandish (Kasabian, for example). 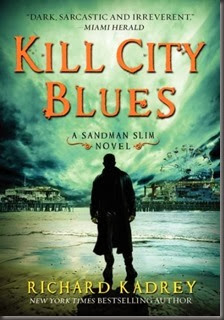 At the same time, Kill City Blues felt somehow… less substantial and satisfying than the previous four novels (and novella – which was actually superb). Certainly, it’s tricky to sustain such high quality over five novels and a novella in a relatively short period of time, and this is not exactly a “dud”. It’s perhaps not surprising that Kadrey’s latest novel, Dead Set, is not a Sandman Slim novel. I get the feeling he needed to clear his head and take a break.

Reading this never quite felt like the author may have been going through the motions. It is probably just a case of this being a transition novel. We get some important character and plot developments, and (not wanting to spoil anything) it felt like pieces were being moved into place for what should shape up to be quite a sixth novel.

I would say this is still a must-read novel, but I would caution readers that this should be approached as part of a larger whole, rather than a possible stand-alone. It’s dark, it’s wonderfully dark and irreverent. It’s snarky and twisted fun. But it didn’t quite light all the same fires are the previous novels.