Continuing Tim Powers’s blog tour, I present to you a guest post about the colourful ‘hero’ Edward John Trelawny. 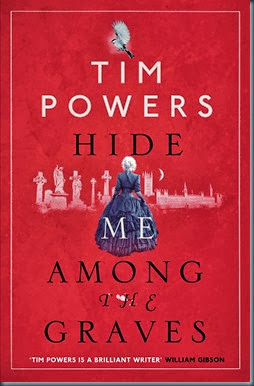 Hide Me Among the Graves had a number of colorful characters in it – I can say that with all due modesty, since I cheated and took real people who really lived for characters: Dante Gabriel Rossetti, a genius painter who lost his health and his mind to chloral hydrate addiction; Christina Rossetti, a devout celibate recluse who nevertheless worked face-to-face with London’s prostitutes to reform them and wrote reams of poetry about guilt and reproachful ghosts; and Algernon Swinburne, possibly the best English-language poet since Shelley, who furiously dissipated his gifts with alcohol and sado-masochistic obsessions – but the most fascinating of this circle was a man whose greatest accomplishment was telling lies about his own life.

Edward John Trelawny managed – largely by living a long time – to be a central character in the Italian circle that included Lord Byron and Percy Shelley in the 1820s, and also a prominent figure in the London of the 1860s, a close friend of many of the Pre-Raphaelite painters and poets. The only other figure I can think of right now who did the same kind of era-straddling is Neal Cassady, who was the friend and inspiration of Jack Kerouac and Allan Ginsberg in the 1950s and then, after the Beat phenomenon had petered out, went on to be the same for Ken Kesey and his Merry Pranksters in the late ’60s. 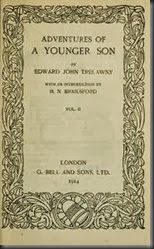 Trelawny, when he appeared in the expatriate literary group in Pisa in 1822, appeared to be the embodiment of a swashbuckling Byronic hero. He told of having deserted the Royal Navy to become a pirate on the Indian Ocean, of having participated in duels and battles, and of rescuing and marrying an Arab princess who was eventually murdered. Everyone – except possibly Byron, who said, “If we could only make Trelawny wash his hands and speak the truth we could make a gentleman of him” – believed the stories he told, and eventually he wrote them all down in his book, Adventures of a Younger Son, which was presented, and universally accepted, as non-fiction autobiography. It’s still a great narrative, the kind of thing Rafael Sabatini would later write.

I believe it was not until the 1970s that researchers discovered that his stories were all lies. In fact he had been honorably discharged from the Navy because he’d contracted cholera, and had then lived a shabby life in London and Bristol with an unfaithful wife. On an allowance from his father, he was able to travel to Switzerland, where he met a friend of Shelley’s and followed him to where the poet was staying in Pisa.

And among this fresh audience he spun his “autobiography.” And it was all fraud.

But when Shelley drowned, it was Trelawny who oversaw the famous funeral pyre, and when Byron sailed to Greece to participate in the fight for Greek independence, Trelawny went along; and after Byron died of a fever in Missolonghi, Trelawny became the lieutenant of a Greek warlord whose stronghold was a fortified cave high up on Mount Parnassus, and he married the warlord’s sister. After leading a number of raids against the Turks, he was shot twice in the back and, over the course of forty days, managed to recover without any medical aid. 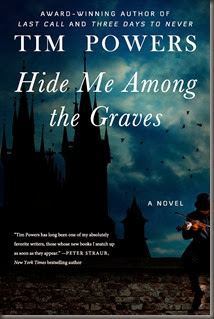 In other words, he began actually living the dramatic sort of life he had previously only imagined and lied about. And any doubts anyone might have had about his previous stories were dispelled by their consistency with his newer, fully chronicled adventures.

He returned to England and wrote a largely true book about Shelley and Byron in Italy, and he became the acknowledged authority on those poets. He even described a long friendship with John Keats, whom he had never met, and no one doubted him.

He lived to be a legendary figure in Victorian England, held in awe because of his piratical youth (false), his friendship with Byron and Shelley (true) and Keats (false), his battles in Greece (true), and other adventures nobody’s sure of to this day.

In his portraits, he glares out of the canvas as if daring you to doubt him. I admire both his very real courage and his very real duplicity, and if I eventually meet him in the author’s corner of Heaven, I’ll listen eagerly to his stories and never doubt him.

Tim Powers’s most recent novel, Hide Me Among the Graves, is out now in paperback – published by Corvus.

The previous stop on the Blog Tour was over at SF Signal, and tomorrow’s is at Fantasy Book Review. Be sure to check them all out! Here’s the tour poster, so you know where to go beyond these two:

Hide Me Among the Graves is published by Harper in the US (the second cover, above).