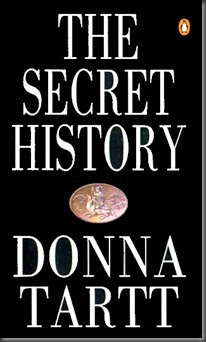 Richard Papen arrived at Hampden College in New England and was quickly seduced by an elite group of five students, all Greek scholars, all worldly, self-assured, and, at first glance, all highly unapproachable. As Richard is drawn into their inner circle, he learns a terrifying secret that binds them to one another...a secret about an incident in the woods in the dead of night where an ancient rite was brought to brutal life...and led to a gruesome death. And that was just the beginning....

Another quick review, this (I’m still trying to figure out how best to review literary fiction). The Secret History has been an international mega-hit, and is frequently listed on Must Read books of the decade, your life, and so forth. As a result, it has been on my radar for years. But, because I am never lacking in reading material, I just never got around to buying it. After a particularly acute bout of book-restlessness, I decided it was time for a change from the SFF genres, and picked this up. I read it over a few very satisfying days, evenings and one night (I ended up finishing it at around 3am). It’s not perfect, but it is certainly engrossing and well-written.

The Secret History is a great novel, in many ways. It’s excellently written, and engagingly told. The characters are varied, quirky, and fun to read about (or, as is the case a coupleof times, uncomfortable to spend time with). This characterisation of college students is rather cliché, but I suppose it suits the story – I refer to the peripheral characters, here (drunks, drug-taking, not particularly bright or upstanding). The wild debauchery of Hampden College is merely a backdrop to the main attraction, despite them partaking in it as well. The focus of the novel are the five students in the exclusive Greek classes, and also our narrator, Richard.

There was something that didn’t ring true for me with this group, though: that everybody liked Bunny. Throughout the novel, he is an obnoxious, irritating presence, and I could never quite put my finger on why any of these characters professed to like him. Not a thing he did or said was redeeming or remotely attractive. It does, however, make it easier to believe how quickly our protagonists could turn on him (as we’re informed in the prologue). There were some affectations that didn’t ring true at all – although, because it was difficult to place the novel in a specific time/decade, I may have misunderstood the occasional thing.

The novel is pretty long, but it rarely felt like it was rambling or bloated. I appreciated Tartt’s attention to detail, and the way she realised the world and characters on the page. It is sometimes self-consciously intelligent and pretentious, but that can be forgiven, as it’s perhaps meant as a reflection of her characters (they are a group of young people who are oh-so-prone to affectations and pretentions). The narrative is sometimes disconnected, but always gripping. The final half of the novel, in particular, was riveting, and I stayed up well into the night to finish it off – thinking “one more chapter” at the end of each and every one.

This is a story of betrayal, loyalty and ultimate sacrifice. The way the characters must hide and tip-toe around what they have done, to hide it from their peers, the police and their mentor is plotted very well. Their tension and anxieties felt realistic and palpable. The ending was a tad melodramatic, and I’m pretty sure it didn’t have to end so. I can’t fault Tartt’s ‘world-building’, though.

I’m extremely glad I read this. It’s not the best novel I’ve ever read, but it has certainly added another author to my must-read list. As soon as I finished this, I bought the eBook of The Goldfinch, Tartt’s latest novel. I’m not sure exactly when I’ll have the time to read it, but I hope it is very soon.

Posted by Civilian Reader at 5:06 PM