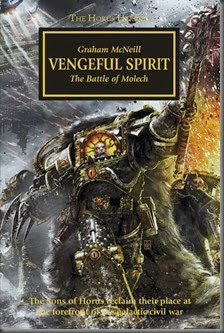 Once the brightest star in the Imperium and always first among his primarch brothers, Horus has dragged the Space Marine Legions into the bloodiest conflict that the galaxy has ever seen. While their allies wage war on a thousand different fronts, the XVIth Legion descend upon the Knight world of Molech – home to the ruling House Devine, and a principal stronghold of the Imperial Army. The forces loyal to the Emperor stand ready to defy the Warmaster, but just what could have drawn Horus to attack such a well defended planet, and what might he be willing to sacrifice to fulfill his own dark destiny?

With its 29th instalment, the Horus Heresy series continues to entertain and impress. McNeill is probably the most skilled of the ‘old hands’ still working on the series, and with Vengeful Spirit he brings Horus himself back into the spotlight. It’s an epic, engaging novel, with just a couple of minor niggles, but also a few welcome surprises.

Vengeful Spirit is presented from a number of characters’ perspectives. Therefore, we get to see a good variety of types of experience in this troubled era. We spend a little bit of time, near the end, with what could be ‘normal’ Imperial citizens caught in a warzone. We spend time with Malcador’s Knights Errant – Legion orphans, basically, drawn together by the Emperor’s right-hand-man to form a special force to work outside of Legion and even Imperial structures. I welcomed the return of Loken et al, and it was especially nice to read about them, rather than having to pick up the audiodramas to follow their exploits. And, of course, the Sons of Horus – primarily from Aximand’s perspective, and never from Horus’s. I had no problem with the latter, as McNeill does a great job of showing the Primarch’s development through the eyes of those who know him the best – the Mournival, Loken, and so forth. Thanks to the nature and culture of Molech’s aristocracy, as well as the planetary invasion that takes place in the second half of the book, we learn more of the bonds between knights/titans and their pilots. I’ve always found this aspect of the Horus Heresy and Warhammer 40,000 universe kind of fascinating, and also creepy in some ways. McNeill portrays it very well, and in the process has only made me more annoyed with myself for still having not read Mechanicum (a goal for the winter, I would say).

Given the length of the novel, some might worry that McNeill’s tendency to allow sections to run away from him would be plentiful. And yet, Vengeful Spirit shows the author much more in control of the plot and his prose. There were a few moments, true, which slowed or tripped the momentum at times, but I nevertheless enjoyed the considerable heft of the novel.

As I’ve already indicated, I really enjoyed the fact that the Sons of Horus were back at the centre of the story – many of the characters who formed the focus of the first trilogy of novels in the series returned, and it was nice to catch up with them. Horus himself and Mortarion’s inclusion were welcome, too. Speaking of the Primarch of the Death Guard, I think it’s time for a full Death Guard novel. McNeill’s portrayal of the Legion’s corruption was excellent – especially that of Grulgor, whose return is delightfully horrific. Mortarion is one of those Primarchs who hasn’t received as much attention as he could have – which is strange, really, given that the Death Guard were one of the four main traitor legions that featured in WH40k for years before there was much attention paid to the others. There was also an Epic miniature for him. So… Let’s see his fall and eventual apotheosis already!

At the same time, though, this is the first time I’ve read and finished a Heresy novel and thought I'd missed something important. There were many references to other events, and experiences of some of the main characters, that I had no memory of reading about before. Some of them were probably minor events, true. This may be a symptom of the increased number of limited editions novellas and audiodramas, which I am either unable to afford to keep up with, or just unable to given time and availability. Given that this is by far my favourite science fiction series, I’m a little disappointed.

To sum up, then, I would say that Vengeful Spirit is a great addition to the series. McNeill does a wonderful job of expanding our understanding of this part of the Heresy, and also developing all the characters involved – especially Horus. Through his conquest of Molech, we are shown one of the steps along Horus’s journey towards confronting the Emperor. I have consciously tried to avoid discussing plot-points in much detail – I didn’t really know where the novel was going, and I think that enhanced my enjoyment of it.

If you’ve been following the series, then this is a must-read. McNeill continues to add so much to the series and readers’ understanding of this time in the WH40k franchise. Superb stuff. Roll on The Damnation of Pythos!