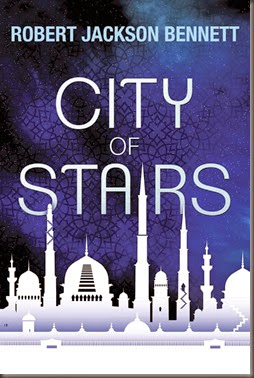 Robert Jackson Bennett’s CITY OF STAIRS is absolutely one of my Most Anticipated novels of 2014. I have a copy of the book, now, so it will mostly likely be my next or next-but-one read. To celebrate the upcoming release in the UK, Jo Fletcher Books have five copies of the book to give away, plus one lucky winner will receive a £100 Red Letter Day experience. Here are the instructions:

All people have to do for a chance to win is let us know on our blog, Facebook page or Twitter – with #CityOfStairs – what tangible miraculous object they would create if you were a god of Bulikov.  A door which takes you to the past and a knotted cord that brings rain when untied are just some of the miracles the gods brought to Bulikov, but we want to know what other people would add to them. The competition is open until October 30th for your chance to win.

You’ve got to be careful when you’re chasing a murderer through Bulikov, for the world is not as it should be in that city. When the gods were destroyed and all worship of them banned by the Polis, reality folded; now stairs lead to nowhere, alleyways have become portals to the past, and criminals disappear into thin air.

The murder of Dr. Efrem Pangyui, the Polis diplomat researching the Continent’s past, has begun something and now whispers of an uprising flutter out from invisible corners. Only one woman may be willing to pursue the truth - but it is likely to cost her everything.